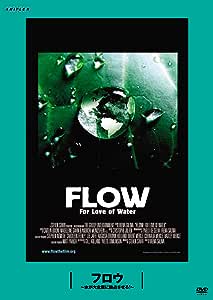 【収録内容】
「FLOW For Love of Water」

Flower
5つ星のうち5.0 If you stand for nothing, then you will fall for anything..
2011年8月18日にアメリカ合衆国でレビュー済み
Amazonで購入
This was awesome! If more people are informed of what is going on with water, then maybe it will move enough people to make change.

It is sad what the big corporation do for money.... Water is a natural resource so why are water companies going into communities acting as if they are going to make things better for them only to turn their worlds upside down and create straight chaos for their communities.

But why would the corporation do this?

MONEY and CONTROL... its not good for people to be in control of themselves... they may realize their strengths and become too powerful. This is the only reason to me why corporations and governments want to control communities oh and let me not leave out home owner associations...

What are your interest?

If you want knowledge about water and how nestle, pepsi, coca cola etc steals water and then resales water to people who love bottled water, then this will inform you and make you want to do something about this.

It is really sad how this has happened over the years, and just because people don't realize what is going on at the time that these water companies come into their communities.. many think the companies come to better their water issues, but they really come to make profit.. to take away.. And from the looks of the CEO's of the water companies on Flow, they looked as if they had no concern for the people who's land they intruded on.

I will continue to share this information with family and friends. People need to know what is going on and what is to come.

I had no idea that Dams also moved people out of their homes and way of life just so a dam could be built, and then never supply the water to the communities that it promised to supply. It broke my heart to learn that dams were built in communities that were vibrant and full of life only to make them relocate to areas where they could not even make food for themselves, their whole way of life changed.

Other things you will learn:

You will learn the names of major water companies, how nestle, Pepsi, and co cola go world wide for water just to drain communities of their natural resources, bottle it and sale it. You will see how people are fighting around the world to drive these companies out of their communities.

Next we will watch Blue Gold and we can not wait to further educate our selves on this matter.

Well back to Flow, and then King Corn...

People Perish for Lack of Knowledge... and division. Educate your communities and then take a stand... together against these giants.

William Waterway
5つ星のうち5.0 Reasons Why You Should Watch "FLOW: For Love Of Water"
2009年10月22日にアメリカ合衆国でレビュー済み
Amazonで購入
The film "FLOW: For Love Of Water" is one of the most important water films of recent years. If you have any interest in your health, the health of your children and of our global civilization - then you should borrow FLOW from your local library or purchase it through AMAZON. In the film FLOW you will learn how over 30,000 people die each day from water-related diseases, and how contaminated water is one of the greatest killers of people in history. You will learn how birth defects and other health problems are substantially higher in areas located near large agricultural zones.

Flow will also bring you up-to-date on what is inside the bottled water you drink, how you can save money and by drinking tap water, and how the some water bottlers are taking control of water sources while destroying ecosystems. The film informs us about how over 30,000 people die each day from water-related diseases. In the film we learn how birth defects and other health problems are substantially higher in areas located near large agricultural zones.

The foundations of the information provided by FLOW can be found in books such as,  The Holy Order of Water: Healing the Earth's Waters and Ourselves , by William E. Marks;  Blue Covenant: The Global Water Crisis and the Coming Battle for the Right to Water , by Maude Barlow;  The World's Water 2008-2009: The Biennial Report on Freshwater Resources , by Peter Gleick et al., and  Water Wars: Privatization, Pollution, and Profit , by Vandana Shiva.

In the film FLOW you will find answers - as to how to create and manage low-tech water management for your home and your community. Why you should stop using bottled water. And, learn how you can help the world's water through some simple changes in your personal behavior, through changes in the way you spend your money and your time.

Howard M. Kindel
5つ星のうち5.0 You Must See This Film
2009年11月20日にアメリカ合衆国でレビュー済み
Amazonで購入
Of the films I've seen and books I've read about current topics, this is the first that I genuinely feel compelled to recommend that everyone should get. It's not possible to understate the significance of the subject - access to decent water - or to overstate the growing threat from the giant water congromerates. The film focuses on three corporations primarily - Thames Water, Vivendi, and Suez. Suez, the French company, has been around for 150 years, so it's gotten quite a good start. Almost no one in the US has ever heard of these companies because they operate mostly in the "third world" and in growing markets like India. The film traces their path across the world; and shows the devastation left in their wake. However, the film also showcases the few instances where the people of a region have been successful in taking back their water, or at least holding off the companies' attempts to corner the market. The culprit is generally the same throughout the third world: the World Bank, which keeps lending money to impoverished areas then demands, as payback, the privitization of public utilities - electricity and water - which results in massive increases in the cost of these utilities. And, of course, the biggest ally privitization has is corrupt governments. The single most compelling piece of the entire film is about a community in India, in an essentially barren region, which built - literally stone by stone - a system of canals to catch and hold what little rain there was. This community created a lush, self-sustaining eco-system which brings in extra cash by permitting it to sell the excess crops. Now, facing the central Indian government's new mandates to make water a for-profit resource, it may become illegal for this community to keep the water it collects. Then, just when you might think this is all other people's problems, the film focuses on a water bottling plant in upstate Michigan which extracts the clean water, replaces it with polluted water, and gets a 90-year tax break to do so. The citizens are fighting the plant; they won the first round in court; but so far the appeals courts are siding with the plant against the community. Nor is this Michigan plant the only one in the US. The problem, like anything left unchecked, is growing exponentially.
続きを読む
2人のお客様がこれが役に立ったと考えています
違反を報告
レビュー を日本語に翻訳する

Zarathustra
5つ星のうち2.0 If The Water You Drink Is Contaminated Just Buy A Plastic Bottle Of Water At The Supermarket.
2013年6月2日にアメリカ合衆国でレビュー済み
Amazonで購入
But If you live in California or Nevada, your water is contaminated with rocket fuel. The water you buy at the supermarket is also contaminated and the plastic bottles are not recycled, they just end up in the Pacific Ocean. The government does not test the water that is sold. Most of the water sold in a plastic bottle comes from tap water.
If you live in a third world country like India or Bolivia, under the Washington consensus the rich countries will get a contract to supply your water, but they will charge you more than you can afford. Pure drinking water is rapidly becoming more expensive than gasoline. In Cochabamba, Bolivia, the price of water was higher than the residents could afford and they held protest marches.
続きを読む
1人のお客様がこれが役に立ったと考えています
違反を報告
レビュー を日本語に翻訳する

Joseph Wronka
5つ星のうち5.0 A must see film for anyone wanting to engage in social action to fulfill this most fundamental human need.
2009年11月24日にアメリカ合衆国でレビュー済み
Amazonで購入
Clean water and access to it is fundamental for humans to survive. Sadly, this precious resource is becoming more rare, if not, close to extinction (yes!) in some parts of the world, creating a modern "trail of tears," an exodus of environmental refugees, and ultimately deaths. Unfortunate also is the fact that many policy makers are "commodifying" this basic human need to quench one's thirst, that is, selling it to the highest bidder. This film cogently portrays the extent and seriousness of this problem and argues, with convincing examples, for global cooperation to adequately replenish and equitably distribute this essential life force. Its conclusion that there ought to be an additional article to the Universal Declaration of Human Rights, a document increasingly referred to as customary international law which all nations must abide, that guarantees clean water as a human right is especially convincing. This film is a must see for anyone concerned about their fellow men and women.
続きを読む
1人のお客様がこれが役に立ったと考えています
違反を報告
レビュー を日本語に翻訳する
すべてのレビューを参照します
Amazonプライム会員ならお急ぎ便、日時指定便が使い放題
さらに、映画もTV番組も見放題。200万曲が聴き放題 。クラウドに好きなだけ写真も保存可能。
> プライムを無料で試す