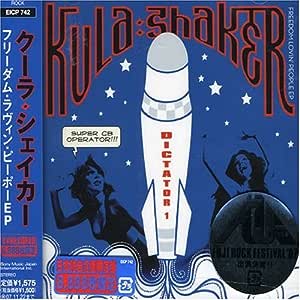 Dopko
5つ星のうち4.0 The Sound is an Odd Mix of Kula Shaker and Led Zeppelin from the Led Zeppelin III or IV Era
2007年6月28日にアメリカ合衆国でレビュー済み
Amazonで購入
Yes, you read that correctly. Aside from Great Dictator (Of The Free Wrold), the tunes have a slightly twangy bluegrass feel never before heard on a Kula Shaker release. If you purchase this, don't expect the over-produced (but lush) sound of  Peasants, Pigs & Astronauts , and forget about the more rocking psychedelic sounds of " K ". I'm not saying it is bad, so don't jump to conclusions.

From what I've heard of " Strangefolk " (Second Sight being my only comparison at this point in time), that rich sound evident on " Peasants, Pigs & Astronauts " has returned in full force while "Freedom Lovin' People EP" has abandoned the multi-layered sea of instruments and deep tones in favor of a more organic sound.

Great Dictator (Of The Free Wrold) - A fun, Bush-bashing song with great falsetto backing vocals and clasic KS organs. It may not be Tattva or Sound of Drums, but it is a rollicking good time with a bit of the traditional Kula Shaker sound and a riotous collection of lyrics.

Super Cb Operator - Similar beat to Dictator, same vocal effects and similar tone but without the constant presence of the organs/keyboards. A fun song, but nothing special compared to other Kula Shaker songs.

Big Bad Wolf - A skiffle beat or old-fashioned Southern-rock beat (Elvis' Bossanova Baby or Rock-a-hula Baby come to mind). Again, it is a fun song but nothing to write home about when you put it side-by-side with songs from " K ", " Summer Sun EP " or " Peasants, Pigs & Astronauts "

Out On The Sky - A "Battle of Evermore" style is applied to this song with good results. Similar instruments can be heard throughout (I could swear I heard a lute or mandolin at one point).

Some Good Reason - Hard to classify this one. It has a more pervasive 60's feel to it that was not evident in the other tracks. Probably the most complex track on the EP, it has a less conventional beat (that still rocks) and a lot of good backing vocals and harmonizing.

Overall, it does not stack up against the " Mystical Machine Gun Ep " or the " Summer Sun EP " as it has much less substance. Compared to most music on the airwaves today, it is a solid release but in the Kula Shaker catalogue it is not up to snuff. I'd recommend it for existing Kula Shaker fans, but not for someone new to the band.
続きを読む
3人のお客様がこれが役に立ったと考えています
違反を報告
レビュー を日本語に翻訳する
すべてのレビューを参照します
Amazonプライム会員ならお急ぎ便、日時指定便が使い放題
さらに、映画もTV番組も見放題。200万曲が聴き放題 。クラウドに好きなだけ写真も保存可能。
> プライムを無料で試す