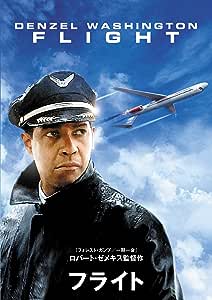 Kindle Customer
5つ星のうち5.0 Denzil Washington at His Best - a Good Storyline Which Will Hold You To the Last Minute!
2018年1月1日に英国でレビュー済み
Amazonで購入
Denzel Washington never fails to put in a brilliant performance. The film and story line are brilliant. Washington plays a brilliantly talented and experienced, but arrogant Captain of a Passenger Airline. He is however, an alcoholic drug abusing pilot.

The start of the film sees his character flying an internal American flight under the influence of alcohol although not presenting as drunk to his co-pilot and crew. The plane goes out of control due to a catastrophic manufacturing fault. Falling from the skies fast with everyone on board doomed, Denzil's character, remaining calm, takes some last ditch crazy and an unheard of courses of actions by inverting the plane, slowing its speed and descent and then righting the plane up the right way gliding to safety with only 6 lives lost.

Running through the film is the dichotomy of Washington's extreme bravery that saved so many lives contrasting with his extreme arrogance and refusal to face his drink dependence depicted by flying drunk. No other pilot would have had the ability to glide the plane to safety and would have caused all on board to lose their lives.

You see his character slowly stripped of his arrogance. His further descent into drink and drugs and facing life in prison for 6 counts of manslaughter if the public enquiry finds out he had been drunk, sees his own personal decline in character willing to do and say anything to protect himself and his career and freedom. The realisation of real imprisonment sees him testing the friendship of the surviving crew on board asking them in various ways not to testify that he had been drinking. The airline put themselves on the line to back up Washington and arrange a cover up. Washington is unable to remain sober, even for the Enquiry, despite his own attempts to stop drinking along with the protection of the airline.

Will he take the way out offered to him by the airline to blame a dead crew member for the missing alcohol bottles on board? Thereby tarnishing her memory forever despite her having saved the life of a little child. Or will he finally take responsibility for his own actions?

A thought provoking film in that but for the drunk Washington flying the plane all would be dead. There is no doubt that the accident was caused by a major part of the plane detaching and falling off mid flight. However, their lives were in danger by being flown by an intoxicated pilot. It also demonstrates the difficulty of drink dependant people to find and take the path to recognition and fight for sobriety.
続きを読む
16人のお客様がこれが役に立ったと考えています
違反を報告
レビュー を日本語に翻訳する

Colonel Redass
5つ星のうち5.0 Do Yourself a Favor
2016年3月17日に英国でレビュー済み
Amazonで購入
Something in this story made me reconsider three months later and watch it a second time. Inside the narrative is a more honest investigation into an aspect of drugs and booze than nearly any other I can recall. To see it, all you have to do is take a single precaution. If you hit the eject button just as the protagonist enters the NTSB hearing near the end, you will have watched an excellent film, near the top of Mr Washington's oeuvre which is saying something, he must be a very lonely man professionally. The final scenes you do not want to see, they are an embarrassing capitulation in the context of what has gone before. The preceding narrative is as honest as it is "inappropriate"--a look at very high performance under the influence of stimulants. Is there a cost? Yes. Is performance enhanced? Oh yes. In this instance, however, it's an in-flight disaster during which the protagonist transcends himself, he saves many lives, a calculus abandoned at the end for the usual reasons. Re-cut, it's an exercise in ambiguity, not something you see often in American film. Do yourself a favor: cut it yourself.
続きを読む
4人のお客様がこれが役に立ったと考えています
違反を報告
レビュー を日本語に翻訳する

P. WILLIAMS
5つ星のうち5.0 The star is NOT the flight but Denzils portrayal!
2016年9月19日に英国でレビュー済み
Amazonで購入
Firstly I'd like to say that I am a very big fan of Denzil Washington and he has made some excellent films BUT I found myself hating him more and more as the film progressed, so convincing was his porrtrayal of alcoholic Pilot Whip Whitaker. The flight scene is in the first 20 minutes of the film but it's the rest of the film that is of real interest, especially as I have painful experiences of living with a very close relative who too was an alcoholic.Whitaker (Washington) is initially seen as a hero, a lifesaver and a miracle-worker for landing the plane as he did but when things don't quite add up, when the full investigation takes place,he is then seen as a liar, a chancer - with other peoples lives and a drug-taking drunkard. The film hits top marks in the Production Design, Visual Effects and Special Effects departments also.Many known faces in the cast, Kelly Reilly(Eden Lake) Bruce Greenwood, John Goodman and the always watchable Don Cheadle. Some have reviewed this and given 1* star only but the real story isn't so much the flight BUT about Washingtons character. Brilliant.
続きを読む
1人のお客様がこれが役に立ったと考えています
違反を報告
レビュー を日本語に翻訳する

Elleppi
5つ星のうち4.0 Sympathy for the devil, and all my appreciation for Mr Zemeckis
2013年8月4日に英国でレビュー済み
Amazonで購入
BOB ZEMECKIS
After so many masterpieces and after spending 10 years experimenting all the possible and impossible options of computer graphics, Zemeckis is back, to prove he's now entered the pantheon of great directors who have nothing else to prove.
His directing style is more balanced than ever, yet still able to suddenly impress you with some original and stunning solution.
But Bob is not one of those kids hanging around the world of cinema, who think more of showing off than to learn how to tell a story and make it good and meaningful.
THE FILM
Flight is wonderfully shot, but it doesn't expose its style like it needs to prove anything. Indeed the best side of Flight does not rely in its style or special fx (apart from the amazing scene of the airplane turning upside down), but in the unpredictable paths of the story: you think the movie is about something, then it turns to be about something else.
Not before going a path filled with characters, unusual moments (the encounters with the pusher, and the glamour yet sarcastic use of Sympathy for the Devil), characters, situations you are going to meet.
Not to forget the ending, where, for once, the moral of the story is not "moralistic" at all.
SYMPATHY FOR THE DEVIL
Indeed this track really represents the spirit of the film: you feel attracted by the total amoral behavior of the main character, than you fall down with him, finally you see the light at the end of the tunnel. But that is not the end. It is just the beginning. It's day 1. Exactly like at the end of Castaway.
続きを読む
2人のお客様がこれが役に立ったと考えています
違反を報告
レビュー を日本語に翻訳する

Satori Hugh
5つ星のうち4.0 Good film but it may not be what you expect
2013年6月11日に英国でレビュー済み
Amazonで購入
Brief synopsis (which contains a few spoilers): Denzel Washington plays a pilot who makes a miraculous landing to save the lives of most people on the plane, but repercussions follow because he was under the influence of alcohol and drugs at the time. The film is less about the actual flight and more about those repercussions.

The flight scene is improbable at best (and most likely impossible, although I'm no pilot or aircraft engineer) and, although we can suspend belief for the sake of a film, it's not really necessary to be so dramatic as it adds little to the story. The whole "flight" bit is really just a backdrop against which to tell a story about alcoholism and substance abuse.

Perhaps the film is trying to make us question whether a pilot who pulls off a miraculous landing is "justified" regardless of being drunk and stoned at the time. Should that cease to be relevant in the circumstances? Make your own mind up on that one!

Denzel Washington is good, as he usually is in films, and John Goodman provides decent - and amusing - support. The film engaged me throughout and you definitely want to see how things unfold, but I felt a bit misled by the title and publicity. I thought the film would be mainly about the flight and the pilot's skills in saving the plane, but that's really only a small part of it at the beginning. That doesn't mean it's a bad film because it's not, but if you are expecting a "disaster movie" along the lines of the "Airport" films, you will be disappointed.