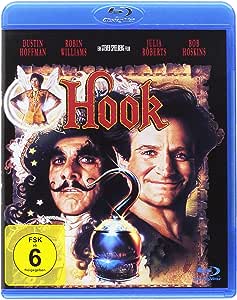 Valerie Gail bartlett
5つ星のうち5.0 A great film awsome steelbook.
2016年5月27日に英国でレビュー済み
Amazonで購入
Hook is a brilliant film for the whole family the film stars Robin Williams as Peter pan a grown up version though who goes back to never land after his children are kidnapped by Hook played by Dustin Hoffman. The film is non stop action full of colour humour and even the odd death the film was directed by Steven Spielberg and stars many big names including Julia Roberts as tinkerbell bob hoskins as smee the film is very entertaining it has a great music score and a lovely ending recommended.
The steelbook version is brilliant this plays in full english the steelbook case is fantastic.

Dominic
5つ星のうち5.0 A childhood classic
2019年6月9日に英国でレビュー済み
Amazonで購入
Takes me back to being a kid, they don't make films like this anymore that have that sense of magic and nostalgia.

For me, one of Robbins best performances (RIP), you have to admire how in character he gets in his films. My favourite scene is the food one where they are eating nothing until he uses his imagination.... I loved that as a kid and it just brought it all back

Alexandra Christo
5つ星のうち5.0 One of my guilty favourites
2013年6月9日に英国でレビュー済み
Amazonで購入
I loved this film when I was younger and nothing has changed about that, even though I'm now 22!

Robin Williams is, as always, brilliant. He's hilarious and I think he makes a great Peter Pan - definitely one of my favourite portrayals. He plays the grown-up Peter fantastically, as a man who has forgotten all about Neverland and his life before growing up. Once he returns to the magical world and finally remembers, his take on Peter was wonderful to watch. Who'd of thought Robin Williams in tights would have been so cool?

I loved the lost boys in this. They were so dependent on Peter and had clearly missed him so much and the ending when he left again just ripped my heart out. They were also so funny (BANGARANG) when they were 'training' Peter to become himself again (the dinner scene was just awesome). Also: Ru-fi-ooooooooooooooo.

Dustin Hoffman as Hook was just splendid. He's such a great actor and I've learned to expect nothing better than AWESOME from him. And he delivered. Hook is perfectly creepy but also kind of strangely likeable.

The puns in this movie provide a lot of laughs (perhaps more now, watching as an adult: see the dinner scene when Peter and Rufio get into an argument) and the film is just a joy to watch throughout.

Okay, so it's not a completely oscar-worthy masterpiece. But it's a film that will keep you entertained throughout and get you back in touch with your childish side, something we all need once in a while. In my opinion, it's a must-see for anyone who's a fan of Williams or, you know, fun.

Brenda
5つ星のうち5.0 What happened after Peter Pan, the book ended?
2014年6月25日に英国でレビュー済み
Amazonで購入
Peter Pan grew up, that's what happened. As he did so, he forgot all about Neverland and the Lost Boys and everything. He married and had children of his own, and then.......Hook came back!!!!!
The story is great fun, and Robin Williams and Justin Hoffman, playing Pan and Hook respectively, are enthusiastic in the greatest degree. Never mind trying to be adult about things, let's have FUN. Julia Roberts as Tinkerbell is brilliant casting; she manages to look just as a fairy should, and Bob Hoskins as Smee is simply perfect.
Have this DVD around for the next time it's raining and you need something to entertain the family. There's something here for all ages. Get ready to take sides and cheer.
続きを読む
2人のお客様がこれが役に立ったと考えています
役に立った
フィードバックを送信中...
フィードバックをお寄せいただきありがとうございます。
申し訳ありませんが、お客様の投票の記録に失敗しました。もう一度試してください。
違反を報告
レビュー を日本語に翻訳する

stephen camps
5つ星のうち5.0 Totally underrated Spielberg/Williams masterpiece
2015年8月15日に英国でレビュー済み
Amazonで購入
This film was underrated at the time, and remains so in my view. Recently revisiting this after the sad death of Robin Williams I realised that this film has all the wonder of ET, adventure of Indiana Jones and great performances as good as Schindler's List. Yet this film is certainly never put in same bracket as those. It's fun and totally touching with the continuing Spielberg theme of family and great story arcs. Picture quality and sound fine. A great bargain purchase.
続きを読む
3人のお客様がこれが役に立ったと考えています
役に立った
フィードバックを送信中...
フィードバックをお寄せいただきありがとうございます。
申し訳ありませんが、お客様の投票の記録に失敗しました。もう一度試してください。
違反を報告
レビュー を日本語に翻訳する
その他の国際レビューを読み込む

Courtney
5つ星のうち5.0 Gt8 actors!
2017年5月24日に英国でレビュー済み
Amazonで購入
I'm a lover of the Peter Pan story and its not only the Disney story but we also look into Peter's life before Peter in Neverland. Its also a message about imagination and finding yourself
続きを読む
役に立った
フィードバックを送信中...
フィードバックをお寄せいただきありがとうございます。
申し訳ありませんが、お客様の投票の記録に失敗しました。もう一度試してください。
違反を報告
レビュー を日本語に翻訳する
その他の国際レビューを読み込む

JB
5つ星のうち5.0 Classic Family Film for all generations
2012年1月31日に英国でレビュー済み
Amazonで購入
Hook, not a film which initially comes to mind when talking about BAFTA's and EMMY's, however, in my opinion, more than deserving of both those accolades. A stellar cast with Robin Williams and Dustin Hoffman (Fantastic villany!) help boost this fim into all viewers long term memory. A solid plot based on the novel Peter Pan, alongside brilliant acting, an AMAZING song that becomes etched into the memorys of all who watch it, coupled with amazing acting, make HOOK a must see film for all!
続きを読む
3人のお客様がこれが役に立ったと考えています
役に立った
フィードバックを送信中...
フィードバックをお寄せいただきありがとうございます。
申し訳ありませんが、お客様の投票の記録に失敗しました。もう一度試してください。
違反を報告
レビュー を日本語に翻訳する