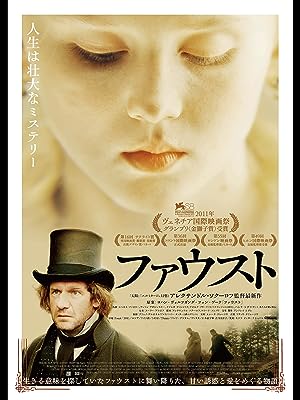 J. L. Sievert
5つ星のうち5.0 Furtive glances
2015年2月15日に英国でレビュー済み
Amazonで購入
The old German tale is cautionary. Whatever soul may be (integrity, for example), it's something to be prized and protected. Once lost in life, it's irredeemably lost and may be lost in other lifetimes as well if they exist.

Desire for earthly knowledge over that of the divine was the central theme of the original story. Here in this fine film version (Russian made, German dialogue) Faust mainly desires sex, not earthly knowledge. He is smitten by a young nubile beauty, the daughter of a coarse peasant who treats her daughter (known as Margarete) as a prized piece of property. Beauty such as hers must not be squandered. It must be used to acquire further property. And so the daughter, always dressed in tight corsets and cumbersome hooped dresses, is watched and protected. But lurking on the perimeter of social affairs in the village is Faust, a middle-aged professor of science and philosophy. Magarete notices this, her curiosity for him aroused. Bashful, modest and inexperienced she may be, but her innocence does not blind her to the ways of the world. She understands what Faust represents and wants.

Their glances are furtive, their chances to speak slim, as Margarete is always chaperoned when walking outside. Much of what they communicate is done almost telepathically.

In the local graveyard during a somber funeral and burial they stand next to one another in a small crowd. All eyes are on the coffin as it is lowered into the ground. Faust gently moves his hand toward hers. They touch. She looks up at him, a chaste smile on her beautiful, pure face. He looks straight ahead, not daring to be seen looking into her cheerful eyes.

After this we know what must follow. Faust does too, but Margarete cannot be procured by orthodox means. There will be no courtship, no wedding bells for Faust, the penniless scholar, nor for his prized young beauty. So Faust consults Mephistopheles, the local moneylender, an emissary of Satan. Parchment, quill and candle are produced. Faust fitfully reads over the document and signs. Love can be satisfied, but he will have her for only one night. Those are the terms.

The film asks no questions and gives no answers. It invites you, as all great art does, to do both on your own.

I have a personal emotional stake in the story. I once loved a young Japanese woman more than 30 years my junior. It was pointless and mad but couldn't be helped: hopeless, impossible, ludicrous. But even now I would sell my soul for just one night with her.
続きを読む
12人のお客様がこれが役に立ったと考えています
違反を報告
レビュー を日本語に翻訳する

Ahmed A. Al Ajmi
5つ星のうち4.0 It was something new to me
2012年10月9日に英国でレビュー済み
Amazonで購入
I bought this film because it won the Golden Lion at Venice Film Festival (2011). The film was difficult. I mean it required a lot of attention and focus from the viewer especially with the added difficulty of reading the subtitles before they disappear. Though I am used to watching subtitled films, I found this one a bit challenging because the subtitles would disappear so quickly, and sometimes I had to rewind or pause the film in order to take in the dialogue. I think if the subtitles' pace was a bit slower and the font a bit larger, watching the film would have been a much easier and pleasant experience.

I think I made a mistake by watching the film without first reading Goethe's Faust and Thomas Mann's Doctor Faustus. My background of the Faust legend was not sufficient to truly appreciate the film in its entirety. I really recommend those who want to watch this film to read more about Faust. At least, you should have some background information on the topic from the Internet; Wikipedia for example. What I am going to do now is to read Goethe's Faust and watch another Faust film directed by the F.W. Murnau in 1926.

The silver lining of this film is that it introduced me to this legend and made me curious to read and learn more about it and that's why I do not feel bad after watching this somewhat challenging film.

Watching this film reminded me of other directors such as Andrei Tarkovsky (Stalker), and Wojciech Jerzy Has (The Hour-Glass Sanatorium). If you have already watched for any of these directors and liked their films, then you are very likely to love this one, too.

The directing, acting, the cinematography, the setting, the costumes were all great and evocative of the era in which this story took place.

Unfortunately, there were no extra features on the DVD. I wished there were some to make the experience of watching the film richer and more informative.

If you want to watch this film I suggest you do some research about the legend of Faust if you are not familiar with it, and bear with the swift subtitles if you do not understand German.

emitnoontime
5つ星のうち5.0 sokurov
2013年4月20日に英国でレビュー済み
Amazonで購入
the sublime filtering in sokurovs visions sounds and rhythms... it is as always a world within itself... directors such as andrei tarkovsky, bela tarr, theo angelopoulos have similar paths and capacity... for those who enjoy a slow hypnotic pace with less cuts and more a sense of 'space in time...' as always check the rest of his catalogue from his international breakthrough success with 'russian ark' and its dark whimsy to others such as 'mother and son' and 'father and son' explore
続きを読む
2人のお客様がこれが役に立ったと考えています
違反を報告
レビュー を日本語に翻訳する

Jonathan M. Winell
5つ星のうち5.0 Under the spell of darkness
2014年1月16日に英国でレビュー済み
Amazonで購入
Faust by sokolov is enchanting, horrifying, mystical and magical. The beauty of corruption, the devastation of downfall. Hypnotic and lyrical. What a feast for the eyes and mind. Amazing that this movie was made just last year. It's stuff that "nightmares are made of". A real treasure. Don't hesitate. Hopefully it will get a US/Region 1 release so all without multiregion sets can view in the comfort of their homes.
続きを読む
2人のお客様がこれが役に立ったと考えています
違反を報告
レビュー を日本語に翻訳する

Gilda Oswaldo Cruz
5つ星のうち5.0 From German into Russian
2013年1月18日に英国でレビュー済み
Amazonで購入
This is an astounding picture, Goethe and one of the main western myths seen through the prism of the Russian soul,

The camera dances dazzingly, the actors (magnificent !) dance, nothing stands still, it is

like a magic ballet full of fierce creative freedom. Bravo, Sokurov, whose previous pictures did not