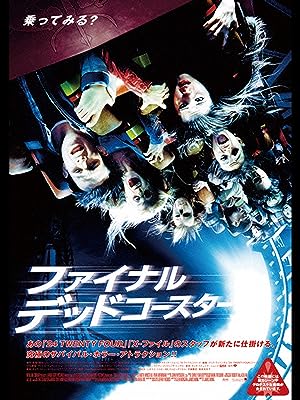 Mikael Belcic
5つ星のうち4.0 The people in this movie are some of the stupidest people in the history of movies
2020年6月12日に英国でレビュー済み
Amazonで購入
If you're a Final Destination fan, it's unlikely that #3 will disappoint. If you like horror/thrillers with plenty of cartoonish blood and gore, this will hit the spot. The film starts to pick up after it begins borrowing liberally from The Omen, even more liberally than the film's two predecessors which, as freak-accident horror films, are by definition Omen clones.
続きを読む
1人のお客様がこれが役に立ったと考えています
違反を報告
レビュー を日本語に翻訳する

BigAl82
5つ星のうち4.0 Loses one star for killing off the dreamy Michael Landes character off screen between 2 and 3 but still excellent
2014年6月28日に英国でレビュー済み
Amazonで購入
If part 2 was better than part 1 (and, IMO, it was) then what is part 3? Having the lovely Mary Elizabeth Winstead as the "girl who gets the premonition this time round" is a huge bonus. I found myself wanting her to live. The death scenes in this second sequel are horrifyingly grotesque but that just adds to the films enjoyment factor. What this film lacks is the spectacular opening freeway free for all disaster. However the rollercoaster is nicely done. There's some wonderful acting here and there, the odd baad performance threatens to sink the film, but it remains afloat. Whilst I have got nothing against nasty naked titties, there were a pair in part 2, the particular scene I am referring to is unacceptably gratuitous and unforgivably graphic. This instance of nudity is far worse than any blood and guts. It's another reason why I'm deducting a star. Anyhoo aside from some bloody awful fake, or real, breasts this sequel is aces.
続きを読む
3人のお客様がこれが役に立ったと考えています
違反を報告
レビュー を日本語に翻訳する

Richie77777
5つ星のうち3.0 "Can I Just Say.. You Make Me Crazy!"
2012年6月23日に英国でレビュー済み
Amazonで購入
Okay the big thing so to speak in this instalment is the incident, (potentially tragic incident), is going to take place at the fairground, on the rollacoaster!

I mention it so often and it appears that a lot of horrors, (especially the cheesy ones like this), love and I mean love to use lots of proleptic irony! (It does kinda grate!)

So a year book has to made.

I love the cliche characters in these types of movies!

It seems like they're using a digital camera as if it were some sort of big deal! - But I guess it was 2006!

As usual you get the premonition of the disaster and then the actual disaster!

You do think while watching what are the chances of that?! - Eg when one guy's camcorder falls off the rollacoaster and lads on the a lower part of the track and wraps around with the cord! (But that's just death's way!)

"Hang in there!" - That's a massive understandment!

All the characters seem to be the same all the way through!

This movie is a great illustration as why not to take a sun bed!!

I think its actually a lot better than the first movie. The first one seems to really drag its feet. This one is more exciting and gets on with things a lot quicker!

And so as usual the characters figure out which order people are due to die in!

I just find myself not really listening to this movie!

I must say she has taken some strange photos at the fairground!

I think without sounding too gory perhaps the death sequences are better in four and five!

(A death takes place in the gym).

So did it skip someone?!

"Now let us hope for some lightning!"

When a character says, (and I know its a huge cliche), "I'm not gonna die!" You know.. you just know!! (Obviously that must be the point!)

"Wendy, Julie! What are the chances?!"

So everyone meets their death at the end.. (on the train track!)

I think out of the three I most prefer the end of instalment two, (its quite comical in a dark way!)
続きを読む
2人のお客様がこれが役に立ったと考えています
違反を報告
レビュー を日本語に翻訳する

Spike Owen
5つ星のうち3.0 The ride of your life-or death!
2011年8月11日に英国でレビュー済み
Amazonで購入
After Wendy Christensen {Mary Elizabeth Winstead} and her pals survive being on a roller-coaster that crashes and kills all aboard. They start getting killed off in terribly gruesome ways. Wendy, after piecing together a link to previous instances of premonition escapes, realises that death is out to finish the job it started. But can she convince the rest of her friends before death comes a calling?

What started out as a fresh and exciting idea with Final Destination in 2000, is quickly becoming tired and stinking of a cash cow franchise. Don't get me wrong, FD3 contains new and ingenious ways to off a bunch of pretty and annoying teenagers, but death literally has lost its sting, he's no longer a threat. Not even the voice of Tony Todd {interestingly absent}, as used here, can rouse one from the slumbers. Even as I write this we are about to be privy to part four in the series, "The Final Destination," with the gimmick of 3D serving only as a tool to entice those in who are jaded by the formula that FD refuses to break free from.

I own the film, in fact the two disc DVD is a whole bunch of fun {make sure to turn your surround sound up for the roller-coaster segments}. But better deaths do not a better film make, and Final Destination 3 ends up being a run of the mill horror picture that's even forgot how to have fun, and that is something that pains, and gnaws away with each and every viewing of it. 5.5/10
続きを読む
1人のお客様がこれが役に立ったと考えています
違反を報告
レビュー を日本語に翻訳する
すべてのレビューを参照します
トップへ戻る
Amazonについて
Amazonでビジネス
Amazonでのお支払い
ヘルプ＆ガイド
日本語ショッピングのための言語を選択します。 日本ショッピングのための国/地域を選択します。
© 1996-2020, Amazon.com, Inc. or its affiliates