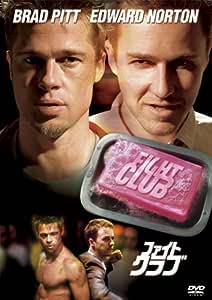 Albatross
5つ星のうち5.0 Often parodied, seldom bettered
2017年1月20日に英国でレビュー済み
Amazonで購入
Chances are, if you’ve watched any popular movie over the last fifteen years or so, you’ve probably heard the line, ‘The first rule of *whatever* is do not talk about *whatever.*’ This is of course the most famous line from the Brad Pitt/Edward Norton 1999 classic, ‘Fight Club.’ In a nutshell, Fight Club is so good it’s spawned many parodies and rip-offs, none of which have even come close to emulating just how good it is.

I’ll give you a brief plot synopsis, but leave it there, as if I go into too much detail, I start running the risk of letting slip some major spoilers. Edward Norton plays a bored and run-down salesman who spends his days flying across America selling his wares. However, his dull life takes a turn for the interesting when he happens to bump into Tyler Durden (or rather Brad Pitt) on a plane. The two of them form an unlikely bond and come up with a novel way of dealing with male stress in the modern age – they beat the hell out of each other for fun. And, believe it or not, this idea soon spreads across the nation and ‘Fight Clubs’ start springing up everywhere.

It’s about now in the review where I list the good and bad points of the film. However, I can’t actually think of anything negative to say about Fight Club and, if I listed all its plus points then I’d probably be here all day. There’s very little wrong with this film in general – it has everything from great central performances from Pitt, Norton and Helena Bonham Carter (and even a sterling performance from Meat Loaf – who’d have thought!) to wry social commentary, snappy dialogue and those plot points I refuse to mention for fear of being hounded off the internet for spoiling movies.

As I’ve already eluded to, there’s definitely more to it than the synopsis, but anything more may ruin the surprises in store. Whether you like dark, intelligent thrillers or just want to see Brad Pitt topless, you really should check this film out at some stage. It’s already a classic and, even after all these years, holds up very well with its themes of fragile male ego, bonding and the establishment in general.

When I watched it last I felt it had an almost ‘Hitchcock-vibe’ to it all, which would explain why it all feels so dark and timeless. If you haven’t seen it, don’t ask people about it, as they may well give away bits of it that will stay with you forever. Just watch it. Then re-watch it again with a completely different view of it all when you know what it’s really about.
続きを読む
14人のお客様がこれが役に立ったと考えています
違反を報告
レビュー を日本語に翻訳する

Dr W. H. Konarzewski
5つ星のうち4.0 Brilliant if uncomfortable viewing
2016年8月14日に英国でレビュー済み
Amazonで購入
Make no mistake, this is a highly intelligent film with great acting and great camera work. Helena Bonham-Carter demonstrates she's got a life outside Merchant Ivory. My only problem was that the film made me uncomfortable, and there were moments of violence that made me want to retch. Perhaps it was a reminder that I'm a middle of the road, comfortable, conventional consumer - the sort of person who needs to be transformed into a real human being by joining a Fight Club. I didn't really enjoy this film, although it held my attention until the end (which I confess I didn't fully understand).
続きを読む
1人のお客様がこれが役に立ったと考えています
違反を報告
レビュー を日本語に翻訳する

BatmanGlass
5つ星のうち4.0 Don't talk about it. BUT I WILL...
2017年2月15日に英国でレビュー済み
Amazonで購入
This film is a classic. Great movie with an excellent plot twist.
You have to see this film, it must be on everyone's list.
It's a beautifully made, and acted film.
There is no weak link in this film, all the actors are fantastic.
Brad Pitt pulls of a stellar performance.
Must buy.
続きを読む
3人のお客様がこれが役に立ったと考えています
違反を報告
レビュー を日本語に翻訳する

Marius Liesdek
5つ星のうち4.0 The Fight Club blu ray
2010年4月3日に英国でレビュー済み
Amazonで購入
Fight Club is a very interesting movie, but I'm not going to review the movie, because that has been reviewed here hundreds of time.

The bluray: before I bought this, I was doubtful whether it would matter to have this movie on bluray. I can say I am satisfied with this HD version. The sound is very clear and the music in this film (in the beginning for example) seems spiced up compared to the dvd version and is cleary superior. The picture quality is robust: this movie had some soft grain, but I think that it was the intention of the moviemaker. Somehow, in this movie, it adds character. There's also an interesting depth to the picture which I cant recall from the dvd. Furthermore, a lot of extra detail can be seen when watching this on blu ray.
There are some documentaries on the disc, but I didnt watch any of them so I cant comment on them.

In short: if you like this movie, and dont own it yet on dvd (I didnt own it yet), you should definitely buy the blu ray, its worth the extra money because it sounds (a lot) better and it looks better (and grittier). If you already own the dvd, it depends on how much you like this movie. I wouldnt buy it again if that were the case.
続きを読む
3人のお客様がこれが役に立ったと考えています
違反を報告
レビュー を日本語に翻訳する

Iorek
5つ星のうち5.0 i have to watch what i say!!!
2008年8月15日に英国でレビュー済み
Amazonで購入
i wrote a review about this movie before! but since i quoted a line from the movie which had a naughty word in it it was not published ... lol!
for me one line from the movie sums it all up "too much testosterone gives you b***h t*ts! lol
they movie sticks quite close to the book from which it is based on which is quite rare. also does not use hardly any cgi grahics... if any... which is quite rare!
as much as i hate bradpitt he plays a great tyler durden! and his view of a chaotic world is quite intruiging!
overall its a great movie and quite brutal at times and messes with your head alot! but thats just the way the book was as well. great movie with a great cast! edward norton was made for this part
続きを読む
1人のお客様がこれが役に立ったと考えています
違反を報告
レビュー を日本語に翻訳する
すべてのレビューを参照します
Amazonプライム会員ならお急ぎ便、日時指定便が使い放題
さらに、映画もTV番組も見放題。200万曲が聴き放題 。クラウドに好きなだけ写真も保存可能。
> プライムを無料で試す