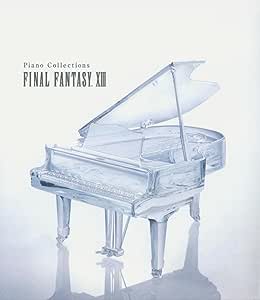 Shadowphoenix
5つ星のうち3.0 Neither great, nor terrible
2013年7月31日にアメリカ合衆国でレビュー済み
Amazonで購入
Piano Collections Final Fantasy XIII is an album of piano arrangements of music from FFXIII. It was composed and arranged by Masashi Hamauzu, and the pieces were performed by Aki Kuroda. Hamauzu and Kuroda had previously worked together on the Final Fantasy X Piano Collections. This album mirrors that one, in that it is pretty much a straight arrangement of the original composition played on the piano, with little to no artistic additions. The only difference is that FFX song's were all around better than FFXIII's, and therefore it's piano collections is also stronger. That being said, they did seem to pick out the best songs from a relatively weak soundtrack and the piano itself is played elegantly. It is also the only piano collection to group similarly themed melodies together into one song. My favorite tracks are those same songs; tracks 1, 2, 6 and 9.

redhead16
5つ星のうち4.0 Great music- if it is genuine copy
2012年7月13日にアメリカ合衆国でレビュー済み
Amazonで購入
Beware of bootleg versions of Japanese Video Game music. I've been buying imported music for over 15 years and this was the first time I got a fake. I knew something was wrong as soon as I opened the mailing package. Square Enix music is never shrink-wrapped. It comes in a plastic sleeve with a sticker holding the sleeve shut. It usually comes with a colorful explanation piece of paper that is folded over the spine of the CD or the top, covered in Japanese writing. Man, the bootleggers are creative but having the real thing is soooo much better. Bootlegging denies the composers from receiving the money from the sales of their music. And the sad thing is that people selling bootlegs in the States don't even know that they are bootlegs.
続きを読む

Ly
5つ星のうち5.0 Piano Collections Final Fantasy XIII
2014年2月6日にアメリカ合衆国でレビュー済み
Amazonで購入
I like some pieces very much such as the first, second and the last pieces after I played the game Final Fantasy XIII. You may like it, too if you play the game and if there is a Piano Collection on both FF XIII and FF XIII-2 would be better.
続きを読む
違反を報告
レビュー を日本語に翻訳する
すべてのレビューを参照します
Amazonプライム会員ならお急ぎ便、日時指定便が使い放題
さらに、映画もTV番組も見放題。200万曲が聴き放題 。クラウドに好きなだけ写真も保存可能。
> プライムを無料で試す