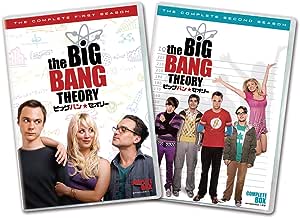 Tom Trueman
5つ星のうち5.0 Our favourite nerds....
2009年10月10日にカナダでレビュー済み
Amazonで購入
Having only recently discovered The Big Bang Theory, I was happy that Seasons 1 and 2 have been released already so I could catch up on all the past episodes. (I'm going to watch another right after I post this.)

I love this show and find the characters very endearing. It's so refreshing to see INTELLIGENT people being the focus for a change, instead of the usual dumb jocks and airhead beauty queens who are the subject of most of the crap on TV these days. (I really don't care whether the "beautiful people" get laid or not, and I find it offensive how often they seem to feel entitled to bully all the "geeks" out there.)

I'm usually chuckling all through an episode -- or sometimes even doubled over with laughter -- even when everyone in the scene is being perfectly serious.

The edition I have offers dialogue in English or dubbed into Brazilian Portuguese, plus a choice of subtitles in English, French, Portuguese, Spanish, Chinese, Korean, or Thai. I sometimes use the English if I miss something rapidly spoken, and I sometimes switch on the French to see how they've translated some of the lines. Very educational!

I watched one episode dubbed into Portuguese, and it was cool to hear the theme song sung in it, and to hear Mrs. Wolowitz sounding exactly the same, only seeming to be from Rio instead of the Bronx!

Lady of the Lakes
5つ星のうち5.0 best buy on amazon
2009年11月25日にカナダでレビュー済み
Amazonで購入
excellent show- started out of the gate with a few watchers and now has become the comedy of the year -
first season slowly developed the main plot and the comedy associated with geeks who have no social graces.
second season - delved into the quirky characters and left no room for doubt that this will be a huge hit and go on for many years - great dvd - great outtakes and worth every cent spent .

C. Lee
5つ星のうち5.0 "Long live the Nerds!"
2009年11月13日にカナダでレビュー済み
Amazonで購入
I decided to order this after watching my first episode of The Big Bang Theory. I am hooked!
Watching the daily lives of Sheldon, Leonard, Penny, Howard and Raj, had me laughing out loud too many times to count. Stand out performance by Jim Parsons as Sheldon. It's the perfect video to appeal to the inner "nerd" in all of us.

Sleanne
5つ星のうち5.0 Don't miss this!
2010年1月4日にカナダでレビュー済み
Amazonで購入
If you haven't see this series yet you have no idea what you are missing. This is by far the best new series around. The characters are well developed and the scripts are well written and very funny. I dare you not to laugh at Sheldon. Take this series home. You won't be sorry.
続きを読む
違反を報告
レビュー を日本語に翻訳する
すべてのレビューを参照します
Amazonプライム会員ならお急ぎ便、日時指定便が使い放題
さらに、映画もTV番組も見放題。200万曲が聴き放題 。クラウドに好きなだけ写真も保存可能。
> プライムを無料で試す