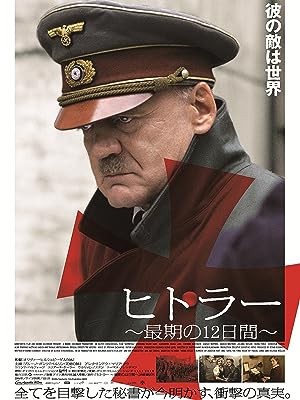 Dodwell
5つ星のうち5.0 Marvellous!!
2017年4月17日に英国でレビュー済み
Amazonで購入
I had to buy this again after I stupidly lent my original copy and never got it back. A marvellous film with amazing attention to detail, focusing on the collapse of the Third Reich and the gradually, street by street, house by house destruction of Berlin. Hitlers descent into madness is carefully chronicled during those last few hours of his wretched life, as he rants at his generals, deploys divisions that only exist on paper and condemns his people to death.
All of the cast members are outstanding and one feels as though one is actually in the doomed bunker with the equally doomed representations of the"master race"
Wonderful.
続きを読む
24人のお客様がこれが役に立ったと考えています
役に立った
フィードバックを送信中...
フィードバックをお寄せいただきありがとうございます。
申し訳ありませんが、お客様の投票の記録に失敗しました。もう一度試してください。
違反を報告
レビュー を日本語に翻訳する

La vie en rose
5つ星のうち5.0 Watch this movie!
2016年7月10日に英国でレビュー済み
Amazonで購入
I just watched this movie on Amazon Prime, having read Traudl Junge's biography some time ago. Initially I was surprised that the movie was going to concentrate only on Hitler's very last days in Berlin. Her diaries and the biography covered a longer period and are a rich source of material about Hitler and the Third Reich. Going back further would have given valuable insight into how Hitler's fortunes changed over the course of WW2.
But, on reflection, this is a big subject and it was probably better to concentrate on the most turbulent period.
Whether you believe that Traudl's decision to take the job as Hitler's private secretary was influenced by her youth and excitement at being close to someone so powerful, it's true that her diaries have provided us with the legacy of one of the closest factual accounts we have of the period and especially the last days in the bunker in Berlin.
Bruno Ganz is superb in the role of Adof Hitler. Completely authentic and compelling based on what I've seen of material broadcast by and about Hitler.
The movie is mesmerizing and absorbing. The savagery of war as a whole is all here, and it hardly needs saying that the closer it became to being inevitable that the Reich was doomed, the more savage it all became.
The only fly in the ointment for me was the Americanized English of the subtitles. I cringed every time 'gotta' was used for 'got to', but luckily I understand German reasonably well, so did not have to rely on the subtitles too much.
Kudos to the amazing Bruno Ganz, but also many congratulations to the entire excellent cast, for portraying such an important event so believably. The movie is a roller coaster ride of disbelief and horror.
続きを読む
20人のお客様がこれが役に立ったと考えています
役に立った
フィードバックを送信中...
フィードバックをお寄せいただきありがとうございます。
申し訳ありませんが、お客様の投票の記録に失敗しました。もう一度試してください。
違反を報告
レビュー を日本語に翻訳する

P. WILLIAMS
5つ星のうち5.0 Exceptional depiction of the final days of Hitler and the Nazis.
2016年12月24日に英国でレビュー済み
Amazonで購入
There are so many wonderful aspects to this film, from the actors, director, makeup to the costume and production designer.Taken from the book by Traudl Junge, Hitlers last private secretary, she recounts the last days of his life and his demagogicrule while ensconced in the bunker set below the Reichstag.Hitler was a great orator, albeit someone who was paranoid, exciteable, depressed and often all three at the same time BUT he was capable of holding his audience in his hand, an audience that at times consisted of hundreds of thousands of people. He would NOT tolerate failure whatever the reasons and no matter by whom.Bruno Ganz is quite outstanding as the megalomaniac German leader, Alexandra Maria Lara - Traudl Junge whom she plays as being a little 'naive'. Corinna Harfouch - Magda Goebbels, who comes across as even harder than her husband Josef, the Nazi parties accicianado Minister of Propaganda played by Ulrich Matthes who said he could NOT understand HOW Goebbels could show or have any empathy with his victims.The film covers the Russian Army and their entry into Berlin - in the films case supplanted by St.Petersburg where the films crew were given virtually free-rein to make the film.One of the saddest moments in the film comes towards the end when the Goebbels decide life without the Fuhrer just isn't life and they commit mass suicide. Corinna Hafouch states in the films 'extras' that she completely 'broke down' as the time for filming this arrived. Bruno Ganz admitted he was very moved and melancholy when he had one of the child actors playing the Goebbels, sitting on his lap. All those taking part in the film are certain to a man in condemning Hitler, the Nazis and all their terrible actions.The logistics of making the film are explained in the exceptional extras to the film.The film and therefore Bruno Ganz give a first-rate depiction of how Hitler was becoming rapidly unstable as time passed and also that he seemingly had NO idea of what troops he had, where they were at any given time or what they were capable of achieving, and he was also more than willing to sacrifice the WHOLE of the German people, whom he said deserved their fate, indeed blaming THEM for HIS failures.
続きを読む
10人のお客様がこれが役に立ったと考えています
役に立った
フィードバックを送信中...
フィードバックをお寄せいただきありがとうございます。
申し訳ありませんが、お客様の投票の記録に失敗しました。もう一度試してください。
違反を報告
レビュー を日本語に翻訳する

Steve Bell
5つ星のうち4.0 Menacing And Frightening Hitler
2017年2月22日に英国でレビュー済み
Amazonで購入
"Downfall" is an electrifying and captivating war drama covering the final ten days of Adolf Hitler's rule in Berlin in 1945. The film begins and ends with a real-life interview from Traudl Junge - a young secretary who fell under the spell of Hitler and the Nazis during the war. She reveals how easy it was for Germans to be swept along by the imagery and rhetoric of Hitler, and states that she now realises that German people should have questioned Hitler more to prevent the horrors which unfolded.

Spoken in the German language, this version of "Downfall" has a very clear picture quality and is easy to understand with very accurate English subtitles.

Bruno Ganz convincingly portrays the shaking and haggard Hitler, realising that all his dreams of world domination are over. At times he is menacing and frightening, and at other times cuts a lonely and pathetic figure. Ganz's uncanny physical similarity to Hitler makes his performance all the more terrifying. Hitler continually gazes at his pristine white model of a new Berlin as the capital of the world - a dream that never occurred.

Alexandra Maria Lara engagingly portrays the young secretary Traudl Junge, showing how she was in awe of Hitler at the start, but quickly realising he had an incredibly dark and sinister side to his nature. Juliane Köhler energetically depicts Eva Braun, illustrating that she was full of life and spirit almost right up to the end. How much of this was a show of loyalty to Hitler or whether she genuinely shared the overflowing hubris of her partner is debatable. And, Christian Berkel wonderfully plays Prof. Ernst-Günther Schenck - a well-meaning doctor who refuses to leave for safety so he can save as many lives of Berlin's civilians as he can.

The disintegration of the Nazi war machine is vividly represented, and Hitler realises that most of his leading soldiers are either incompetent or disloyal. Many soldiers and their families choose to commit suicide rather than fall into the hands of the invading Russians. The most harrowing episodes are when Ernst-Robert Grawitz kills his family with grenades and Magda Goebbels murders her six young children with cyanide capsules.

After testing his own cyanide capsule on his beloved dog Blondi, Hitler dramatically organises the murder and suicide of himself and Braun, ordering his body to be burnt so the Russians do not capture his corpse.

Although the last days of Hitler is a relatively well-known story, "Downfall" brings a terror and immediacy to the end of the Nazis, showing that when soldiers and their families realised Germany had lost the war, they were quick to make the decision to kill themselves, or attempt to completely disconnect themselves from Hitler.
続きを読む
1人のお客様がこれが役に立ったと考えています
役に立った
フィードバックを送信中...
フィードバックをお寄せいただきありがとうございます。
申し訳ありませんが、お客様の投票の記録に失敗しました。もう一度試してください。
違反を報告
レビュー を日本語に翻訳する

Persistent Gardener
5つ星のうち5.0 An efficient machine...
2013年7月4日に英国でレビュー済み
Amazonで購入
Late April 1945. Under the thunderous pounding of the Soviet artillery,
the lights flicker momentarily, inside A.Hitler's bunker.
But the power plant is humming efficiently, the uniforms are pressed,
and the dinnerware is sparkling. The Third Reich's "Gotterdammerung"
is not immersed in the shadows of burning Berlin. It is bathed in the glaring
electric light of the bunker's immaculate corridors, where people still
obey-to the bitter end-the orders of a collapsing regime.
It is this image of efficiency that Germany cherishes, oblivious
to the devastation and unspeakable horrors visited upon the weak of the
"Master Race", and the "inferior races" of subjugated Europe.
Director Oliver Hirschbiegel and writer Bernd Eichinger extensively
researched archival material, eyewitness accounts, and historical studies.
They tried to encapsulate the very essence of the National Socialist regime,
in the dramatic account of A.Hitler's last ten days.
This is not the domain of Hollywood's fiendish, raving caricature of A.Hitler.
This is a regime which received more than 17 million votes in March 1933.
And this is a people with such a vast superiority complex, that many
prefer suicide to defeat and subjugation to the "sub-human" Slavic hordes.
Traudl Junge, A.Hitler's last secretary, opens and closes the film.
Her message is clear: Germans cannot claim ignorance for their actions-
not then, not now, not ever.
This is a masterpiece of a film, much better in its image quality, compared
to the DVD edition.
Watch the other German masterpiece released in the same year:
Before The Fall [DVD ]
続きを読む
5人のお客様がこれが役に立ったと考えています
役に立った
フィードバックを送信中...
フィードバックをお寄せいただきありがとうございます。
申し訳ありませんが、お客様の投票の記録に失敗しました。もう一度試してください。
違反を報告
レビュー を日本語に翻訳する
すべてのレビューを参照します
トップへ戻る
Amazonについて
Amazonでビジネス
Amazonでのお支払い
ヘルプ＆ガイド
日本語ショッピングのための言語を選択します。 日本ショッピングのための国/地域を選択します。
© 1996-2020, Amazon.com, Inc. or its affiliates