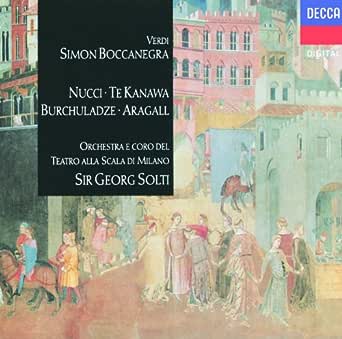 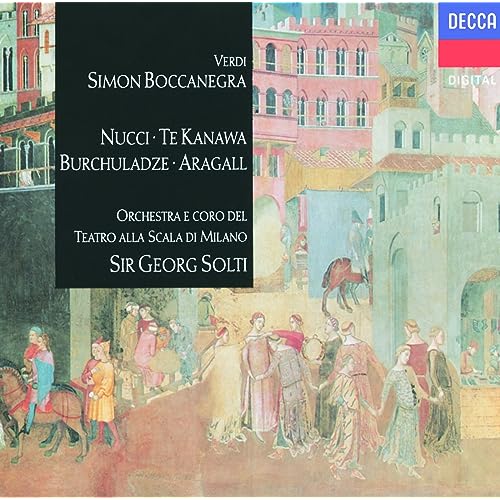 Ralph Moore
5つ星のうち4.0 Much better than its reputation
2008年8月31日に英国でレビュー済み
Amazonで購入
This recording seems to have had a lambasting from all quarters ever since it appeared. Perhaps, as the "Gramophone" says, it's a case of "the better being the enemy of the good", as it's true that both Gobbi's recordings (the 1957 mono studio set conducted by Santini and the terrific live 1961 performance with Gencer and conducted by Gavazzeni - see both my reviews), Gavazzeni's earlier studio set and the 1977 prize-winning set conducted by Abbado all offer a more dramatic, better sung experience of this dark and fascinating opera - but I still find much to enjoy in this version. I made a point of listening to, and comparing key points from, these different versions very carefully, and I honestly do not believe that it's as bad as "Gramophone", "Music Web International" and various other critics, official and unofficial (such as the previous Amazon reviewer), make out.

Let's start with its virtues, chief among which is the pure, gleaming, tender Amelia of Kiri Te Kanawa - one of the best things she has done on disc. Then there is Solti's sensitive direction; he makes a lovely job of the "sea music" and a direct comparison with Abbado's opening to Act 1 will bear me out. Contrary to his popular image of driving hard, he could, at times, inject a little more tension and momentum into the action, but he is very considerate of his singers. Another bonus is the chance to hear the under-recorded Aragall singing very expressively. Both his timbre and his characterisation (in an admittedly rather limited role) are very similar to that of his great compatriot, Carreras, and there's not much to choose between them, although Carreras is perhaps more animated. Then there are the supporting roles: Paolo Coni and Carlo Colombaro are stand-outs as Paolo and Pietro respectively - real, ringing, Italianate voices. In fact, I agree with a previous reviewer that I would perhaps have preferred to hear Coni in the title role.

Having said that, Nucci is not that bad. He has something of the bleat up top that (for me) disfigures Bruson's voice and a most irritating habit of approaching every higher, louder note with a slide up a full fifth of an octave - a terrible, insecure tic - but he is not totally outsung and can certainly be heard in the ensembles. He could be more tender in the exchanges with Amelia - soft notes elude him and one longs for Gobbi - but he compares reasonably well with Cappuccilli as Italian baritones go. Burchuladze has a vast, cavernous voice and some impressive moments - again, I do not hear that he is so much less sensitive than, say, Ghiaurov, in "Il lacerato spirito" - but his Italian is a trial. Every open "ah" sound becomes an "aw", which grates on repeated listening. In addition, he pronounces "angeli" in Slavonic style with a hard "g", such that we get "Awngheli" - couldn't someone have picked him up on this? At least the infamous wobble is well under control here and he sings with conviction.

So, a disaster this is not, and I am particulary happy to have Te Kanawa and Aragall in their respective roles - though I would still recommend the live Gobbi, mediocre sound and all, above the DG set and all others, for the sheer thrill of four great voices in full flight.