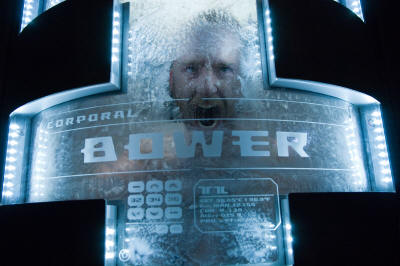 Mr. A. T. Clarke [Welsh Dragon}
5つ星のうち5.0 A GREAT SCI-FI RIDE
2016年3月22日に英国でレビュー済み
Amazonで購入
Dennis Quaid gives another great performance as in "Legion " more recently, well supported here by Ben foster. its all about Dennis and Ben coming out of a time sleep to wake up on their space station and to find its been taken over by alien creatures. full of suspense and twists and turns.in a non stop entertaining piece of Sci-fi.its edge of the seat stuff alright.Is there anyone else on board ? and can anyone stop the creatures from taking over, is there any escape ? a film which shows you don't have to have a big glossy production to make a good movie.
続きを読む
2人のお客様がこれが役に立ったと考えています
違反を報告
レビュー を日本語に翻訳する

Barbara. Barron
5つ星のうち5.0 Good every which way
2013年9月13日に英国でレビュー済み
Amazonで購入
The film starts off pulling no punches. It says I'm going to be scary, and dark, and I'll have you guessing as to what exactly is going on. It puts the viewer in the same place as the two poor astronauts who wake up not knowing where they are, who they are, the feeling of complete disorientation is beautifully portrayed, like waking from a nightmare! One thing, however, becomes clear very quickly in the plot, they are going to have to fight very hard for their lives, the monsters don't take long to make their presence felt!

They have the unenviable task of saving the ship, therebye saving themselves, controlling the monsters, and also a strange virus that is the other monster in the equation, this monster actually changes its form, and is most difficult to diagnose. It's a virus which will put all the crew in serious danger.

As the astronauts become more aware of who they are and their role in the running of an enormous starship, the viewer's awareness grows apace. The tension builds with a rush through the ship against time, to the reactor, until the final outcome, which is excellent, and the end scene is not easy to spot before it happens.

The acting is excellent, as are the sets, which have been designed to give the impression of the spacious depths of the ship. It reminds me of "Event Horizon", with the scope of the plot and the horror content, I consider that one of the finest horror sci-fi's I've ever watched.

There is much worth a number of viewings, and I look forward to spending some enjoyable time getting to know this movie better.
続きを読む
2人のお客様がこれが役に立ったと考えています
違反を報告
レビュー を日本語に翻訳する

Amazon Customer
5つ星のうち4.0 Well worth £1.79 including postage
2018年8月21日に英国でレビュー済み
Amazonで購入
Not a bad sci-fi film. The spaceship sets look cool and the premise is interesting enough. Definitely worth checking out the 28 minutes of extended or deleted scenes that are part of the extras, as I found they helped improve the story for the most part (excepting Payton and Gallos last scene, which I'm glad was omitted from the movie). The 'alien' species I found the least of interest, as I much preferred the survivor's interactions and the threat of the malfunctioning spaceship.
続きを読む
違反を報告
レビュー を日本語に翻訳する

TeeBee
5つ星のうち3.0 A couple of hours of boredom.
2017年9月12日に英国でレビュー済み
Amazonで購入
It's OK is all I can say. It is at times very slow and so I have speeded up the playback. The end result is that I can find no logic to the story because I have jumped so much of it. However, I don't feel at all bothered and will not try and watch the missed bits. In fact, I doubt I shall ever watch it again.
続きを読む
1人のお客様がこれが役に立ったと考えています
違反を報告
レビュー を日本語に翻訳する
すべてのレビューを参照します
トップへ戻る
Amazonについて
Amazonでビジネス
Amazonでのお支払い
ヘルプ＆ガイド
日本語ショッピングのための言語を選択します。 日本ショッピングのための国/地域を選択します。
© 1996-2020, Amazon.com, Inc. or its affiliates