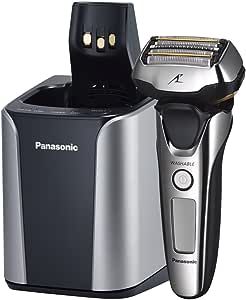 Doc H
5つ星のうち5.0 Panasonic ES-LV9A-S vs ES-LV95-S
2016年4月19日にアメリカ合衆国でレビュー済み
パターン: 単体Amazonで購入
This will be a first for me - review of a product not commercially available in the US - the Panasonic ES-LV9A-S, comparing it to their previous flagship foil, the ES-LV95-S. The Panasonic ES-LV9A-S is listed here on Amazon and you can purchase it, but it is for the Asian market and in fact comes directly from Japan - complete with users manual printed in kanji. It is sold in an English-language version as the ES-LV9N-S on the Panasonic North American site as of 1 May 16, and previously on the Panasonic Australia site. The only minor differences that I could see on the shavers themselves are that instead of the "Wet/Dry" printed above the power button on the US/Australian model, the Asian model says "Washable," and most of the printed information on the back of the Asian model is in kanji with the exception of voltage and serial number; all other features seem to be identical.

No worries as the Aussies say - the shaver itself has controls and LED readouts in English or conventional symbols, and it's very similar to the Panasonic ES-LV95 -S (with some new and very functional differences). Panasonic's customer service advised me that there were no user manuals yet printed in English, however with an Internet search you can locate the English language version of the manual.

Both shaver series (LV95 and LV9) are made by Panasonic of course, so the new LV9A should feel familiar to current Arc 5 users - similar balance, large 5-cutter head, wet/dry shave; most significantly different, however, is the head. The head on the LV9A is actually depressable, as well as having a 360 degree swivel, making it probably the most adaptable foil shaver ever built for following the contours of your face. It seems to glide effortlessly around chin, neck or jawline. The other difference, only slightly less noteworthy, is that the head has two tiny gold-colored "comfort rollers" running the length of the head on the long axis between the foils on each side, which effectively prevents the foils from being pressed too hard onto your face, virtually eliminating razor burn. These features add slightly less than a half inch to the overall length of the shaver compared to the ES-LV95-S, but doesn't seem to affect balance or feel of the shaver at all. Interestingly, I have confirmed that the foil and cutters are interchangeable between these two shavers, although the heads themselves are not - you could therefore use the improved (in my opinion) foil of the LV9A on your ES-LV95 and see some of the the advantages of this shave by just swapping out foils (now available at about $65 for a set).

Cosmetically, I prefer the looks of the ES-LV9A-S over the earlier Panny - the front fascia is actually metal, with a brushed chrome appearance, and a smaller LED display panel; the plastic head housing for the foil and cutters is finished with a similar brushed chrome look. The on/off control button is also metal, flush with the shaver body, with a little more complex series of functions. Pressing it once will turn on the shaver in the "Sensor" mode, familiar to LV95 users, which I use all the time (this mode detects beard thickness and adjusts shaving speed accordingly, and it does work - for me). Pressing again turns the shaver off, unlike the double press required to turn off the LV95. Pressing and holding the button down for 2 or 3 seconds will turn the shaver on in Cleaning mode, bypassing the Sensor function, which runs at a higher speed for about 20 seconds to clean the head while traveling. There doesn't seem to be a non-Sensor mode, but I never used it on the LV95 and it really isn't necessary on this shaver - the sensor sets the correct speed for maximum cutting efficiency regardless. Pressing the button to turn on the shaver, then pressing to turn off and holding for 3 seconds will enter the "Lock" mode, effectively disabling the switch for travel (a blue lock symbol appears on the LED screen). Holding for 3 seconds again will release the lock and turn the shaver on. Unlike the LV95, there is no mechanical locking ring on the power button. If you hold down the button for 20 or 30 seconds, it will reset the "time to change cutters" symbol, which will appear when you need to change out your cutter blocks and foils, usually about a year. I discovered all this more or less by trial and error, so really no manual required.

The back of the shaver is all soft, textured ribbed rubber, very ergonomic to hold; seams and edges are well done and fitted flush - it's a nicely put together shaver. The pop up trimmer is standard Panasonic, functional and effective. The head lock is the same as the LV95, and locks the head for more precise shaving under the nose and around sideburns for example. There's a large thumb rest just below the head in the front, which does seem to add extra control when shaving. The running noise level seems slightly less than the LV95.

The shave seems to be even closer and more comfortable than that with the ES-LV95, possibly because of the redesigned head; in any case, using a brush and warm lather with artisan shaving soap is the ultimate in electric shaving comfort for me, and this shaver performs better than any foil shaver I have ever used. Haven't tried it dry, but I would guess it provides an equally comfortable dry shave experience. Battery run time seems about the same for both shavers - a week or so of shaving on the road without recharging. The cords for both shavers appear to be identical as far as electronic specs and connector. Information on the LED is similar for both shavers as well - red charging symbol, percentage of battery life with circular bars, Sensor or Cleaning mode, MIN USED shave time.

The cleaning station looks identical to the LV95 station, but in fact this shaver will not fit in the earlier LV95 model. It may have a slightly larger or deeper opening for the head, but regardless, both stations function the same - both use Panasonic detergent packets and water, both run the same amount of time for the cycles (5 or 10 minutes for cleaning, followed by a little over an hour of fan drying), and both presumably will last at least a month between solution changes. The solution tray and filter insert appear to be identical for both stations. Same control buttons on the front - in English. The fan on the LV9A cleaning station does seem to be somewhat louder and higher pitched - you definitely know a fan is running, but still quiet enough for sleeping friends or family nearby - just. The cord plugs directly into the shaver for charging on the road, and like all wet/dry shavers you can't use it plugged in. It does come with the least protective and cheapest of Panasonic travel cases - which are pretty minimalist anyway: just a cloth bag with a drawstring, but a plastic head protector is included. The ES-2L13 is the Panasonic hard case for this shaver, sold separately here on Amazon for about $30 (https://www.amazon.com/gp/offer-listing/B014GL7ZIS/ref=dp_olp_new_mbc?ie=UTF8&condition=new). Included in this kit were a small bottle of oil and a brush, presumably for travel.

All in all, a very nice upgrade to the ES-LV95, but at a premium price right now. If you're in the market for a new high end shaver, are adventurous and don't mind the cost though, you can't do better than this Panasonic (update - as of this edit today it's about $100 more than the ES-LV95-S; that can change, but it pays to keep looking on the site).
続きを読む
31人のお客様がこれが役に立ったと考えています
違反を報告
レビュー を日本語に翻訳する

Duddie
5つ星のうち5.0 Great shaver and fantastic seller
2016年7月20日にアメリカ合衆国でレビュー済み
パターン: 単体Amazonで購入
My beloved Braun Series 7 got lost so I decided to go for high end model shaver. After reading reviews on top line Philips shavers from the new series I found out that their marketing drives engineering and they managed to create blades that degrade in 3 months. Very similar situation regarding Braun series 9. So if all shavers are so bad I decided to give a shot at this brand new Panasonic as I never had one. This is a masterpiece and I am massively loving it. Only had it for 3 days but my face already loves it (I have to shave twice a day and have very sensitive skin) and it gives very close shave even operated dry. Build quality and engineering are amazing. One big problem is that it comes with soft pouch (actually quite crappy bag) and not with hard box like Braun. I would not take down a star for this but Panasonic could do better. I am OK to go and get third party because I paid a bargain price for the shaver. This came directly from Japan and is Japan made. The price including shipping was still a half of price I would have to pay for that shaver in HK. The sender service was amazing and they are very responsive and responsible people. Would buy this product again and definitely would buy again from this seller.
続きを読む
10人のお客様がこれが役に立ったと考えています
違反を報告
レビュー を日本語に翻訳する

Adriciu
5つ星のうち2.0 Good for a while
2019年4月22日にアメリカ合衆国でレビュー済み
パターン: 単体Amazonで購入
Over the years I went through a number of Panasonic shavers. Unfortunately this one was the least favorite. It does provide a close shave indeed, but after one year and half the water pump in the cleaning system broke down, so now I can use only for charging and drying. The paint on the head also is flaking off, so every other day I am asked why I put glitter on my face. The foil and blade replacements are quite expensive, and they don't last for the promised 12 months. At least the shaving was good, but for the price I paid the details are also important
続きを読む
違反を報告
レビュー を日本語に翻訳する