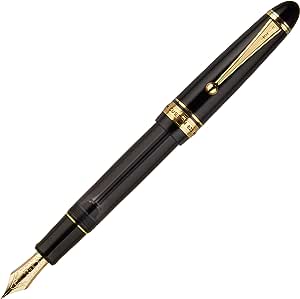 Peter Fusco
5つ星のうち4.0 SLIGHTLY DISAPPOINTED - UPDATED 11/3/19
2019年9月17日にアメリカ合衆国でレビュー済み
Amazonで購入
If you've read some of my other reviews I tend to be as fair-minded as possible in hopes of helping my fellow shoppers make wise decisions about how they spend their money. The Pilot 823 Custom is supposed to be the premier pen for the more or less discerning buyer. It's not the most expensive, but it is rather pricey unless you're into pens or you like to give really nice gifts. However, it's performance is somewhat lacking. When it writes it is all a fountain pen is supposed to be. Problem is, it doesn't write all the time. It goes dry midsentence.

Some people have posted "fixes" for this problem (it's rather common), but my thing is, why do I have to "fix" something that's brand new? Shouldn't it work right out of the box? Okay, so maybe it's a little finicky and you have to coax it along at times, but that's like saying I have to coax my four wheel drive vehicle through snow. No, the pen should write no matter what.

I'm going to keep it anyway and maybe down the road when I have the time, I'll fiddle with it and it will work right. After all, there are more people with better opinions of this pen than mine on here and they can't all be star struck by a pen that costs so much or one that says, "I'm a pilot 823 Custom, how dare you lay me next to your Parker Sonnet?"

I still give it 4 stars only because I had to watch a YouTube video on how to make the pen write the way it's supposed to, i.e the way I want. It has to do with removing two tiny gaskets, one that prevents the ink from flowing out of the pen under pressure, e.g. if you're flying, the other acts like a stopper on the plunger. I don't know exactly what its purpose is, but I removed both and the pen is now a writing champ. In fact, my 823 is now among my favorite writers. You can't argue with the overall quality of the pen because it is excellent, I guess the tiny grommets (gaskets) are simply the Japanese way of making sure they have all the bases covered, you know, essentially unnecessary, but there anyway.
続きを読む
2人のお客様がこれが役に立ったと考えています
役に立った
フィードバックを送信中...
フィードバックをお寄せいただきありがとうございます。
申し訳ありませんが、お客様の投票の記録に失敗しました。もう一度試してください。
違反を報告
レビュー を日本語に翻訳する

mathprof
5つ星のうち5.0 Perfect daily writer
2018年8月22日にアメリカ合衆国でレビュー済み
Amazonで購入
This pen has a stiff, smooth nib with perfect ink flow. The filling system needs to be mastered. It is similar to the Shaefer snorkel system (without the snorkel). A complete filling is 2.4 ml of ink. But don't expect to get that much ink on your first few fillings. Also, there are many videos on the internet about filling this pen. They all seem to be by pen collectors (or sellers). Also none actually read the instructions for proper filling and usage of the pen. Some do explain the trick to completely filling the pen with ink (it is a two step system). The instructions say that one cannot fill the pen properly using ink in a standard ink bottle 30-60ml. They also say that one should only use the Pilot ink that comes in 70ml bottle. This is not quite true but the 70ml bottle is actually designed to be used with this pen. Opening that bottle of ink (which you can order from Amazon for 13$) you can see that there is a plastic cylinder in it with an opening slightly smaller than the opening in the bottle. It floats in the ink. Before opening the bottle (making sure that the that the top in on tight). Turn it over and then right side up. When you open the bottle you sill see that the ink almost fills the cylinder. The pen must be immersed past the point in order to fill in the fist step. If you are still interested, look at the videos to see the second step.
続きを読む
3人のお客様がこれが役に立ったと考えています
役に立った
フィードバックを送信中...
フィードバックをお寄せいただきありがとうございます。
申し訳ありませんが、お客様の投票の記録に失敗しました。もう一度試してください。
違反を報告
レビュー を日本語に翻訳する

Amazon Customer
5つ星のうち5.0 The best.
2017年2月11日にアメリカ合衆国でレビュー済み
Amazonで購入
I own dozens of fountain pens, vintage as well as new, of various brands.
I spend hours every day writing (I am a writer and academic).
This is the absolute best fountain pen I have ever written with. By far.
And this is not even the most expensive one in my collection.
Craftsmanship everywhere perceptible. Attention to detail. Impeccably put together.
I bought a second one, just in case something happens to my regular one.
One quality, I seldom see mentioned: I've taken dozens of long haul flights with this pen. It has never leaked once: the vacuum piston keeps the ink from flowing until you unscrew the end cap. Until then, keep it tight ans secure.
続きを読む
6人のお客様がこれが役に立ったと考えています
役に立った
フィードバックを送信中...
フィードバックをお寄せいただきありがとうございます。
申し訳ありませんが、お客様の投票の記録に失敗しました。もう一度試してください。
違反を報告
レビュー を日本語に翻訳する
その他の国際レビューを読み込む

Night Rider
5つ星のうち5.0 More Than I Expected.
2015年5月4日にアメリカ合衆国でレビュー済み
Amazonで購入
This is one beautiful pen. Even with my large hands I prefer to use it without posting. The medium nib is glass smooth and wet, but not so wet that it creates ink blots when writing. I ordered the smoke because it has the appearance of a more traditional pen, and it was more than I expected. Even though it is a demonstrator pen, the ink level is difficult to see unless held up to the light. Just a beautiful pen with a nice weight. You can't beat the quality of the Japanese nib.
続きを読む
7人のお客様がこれが役に立ったと考えています
役に立った
フィードバックを送信中...
フィードバックをお寄せいただきありがとうございます。
申し訳ありませんが、お客様の投票の記録に失敗しました。もう一度試してください。
違反を報告
レビュー を日本語に翻訳する