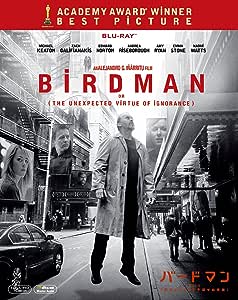 Andrew Lawston
5つ星のうち5.0 Assured masterpiece
2017年4月3日に英国でレビュー済み
Amazonで購入
I was gutted to miss this film on its first release, but it more than held up on the small screen on DVD.

Michael Keaton plays a washed up actor famous for being in a superhero franchise, who's directing and starring in his own stage adaptation of a Raymond Carver story. He also thinks he has telekinetic powers and that his most famous character talks to him in his head.

The vast majority of the film is presented in what looks like (but isn't) one single flowing take, which is a nice device for a film which deals extensively with the theatrical world, but it also means that there's a constant barrage of imagery and an endlessly mobile camera - if the camera stops for more than a few seconds, the film would have been static and dull. It's never static or dull...

There is a nod to Jean-Luc Godard's early work in the opening credits as letters fill the screen in alphabetical order in time with an unseen drummer. Drummers occasionally appear in unlikely places throughout the film, and it's never clear whether or not characters can hear the musical styles that flow throughout. At one point an actor is heard bellowing a soliloquy from Macbeth in a staccato rhythm for several minutes apparently in voiceover before eventually being revealed to be standing in the street. The single shot format means that Iñárritu had to choose which character to focus on during some key conversations, the audience is denied the opportunity of seeing several important reactions (most notably when Emma Stone rages at her egomaniac father). It all gets a bit Brechtian, in the most wonderful way.

The film was always going to stand or fall on the strength of its performances, and everyone here is on top form. Michael Keaton gives his best performance since, funnily enough, Batman Returns in 1992... Edward Norton is compelling as a thinly-veiled parody of what you probably imagine Edward Norton is actually like in any case. Emma Stone, Naomi Watts, Andrea Riseborough, Lindsay Duncan and Zach Galifianakis are all brilliant - though it has to be said that Naomi Watts must be getting fed up of playing struggling actresses...

If you haven't yet seen this film, you really ought to.

And, let's be honest here, who doesn't want them to make Birdman 4?

rbmusicman/and/movie-fan'
5つ星のうち4.0 'COMING TO TERMS WITH REALITY A CONSTANT STRUGGLE FOR 'RIGGAN'
2015年5月6日に英国でレビュー済み
Amazonで購入
The film tells the story of actor and director 'Riggan Thomson' (Michael Keaton) who craves to be the Star
that he once was, again.
He has adapted a play written by 'Raymond Carver' investing heavily in it's success on the Broadway Theatre
scene.
When 'Mike' (Edward Norton) agree's to fill the vacated role in his play 'Riggan' believes it'll help sell the show,
however 'Mike' proves to be the cuckoo in the nest, a younger actor who steals the limelight on-stage early on,
even sharing his thoughts with a newspaper critic.
In years gone by 'Riggan' had played a lead role in a Super-Hero movie and indeed it's sequels, he was 'Birdman'
He often see's himself as the fictional character and imagines he has the powers he'd portrayed though in truth
he knows he'll never recapture his glory days, but is there one more 'Hoorah' for the actor.
The film does have an impressive cast list including = 'Emma Watts' who plays his daughter and assistant - 'Sam'
and 'Emma Stone' who plays actress - 'Lesley'
I found it an unusual film, bit of a slow-burner that i grew into, there are one or two comic moments along the way,
though a comedy isn't how i'd describe it, it was in many ways tragic, a man who had struggled in life after his Hay-
Day of yesterday had long past.
Many superb performances among the cast, none more so than 'Michael Keaton'
Maybe not everyone's cup-of-tea.
Special Features -
* Birdman All-Access - get an unprecedented look at the innovative process employed bringing this project from
page to screen

raymondo
5つ星のうち1.0 dont let kids see this film.
2019年3月13日に英国でレビュー済み
Amazonで購入
I was shocked its a disgusting film , swearing and very rude in places , embarrassing to watch with family. I fast forwarded the disk ejected it and threw it in the rubbish bin , please don't waste your money because of the cover. RB
続きを読む
2人のお客様がこれが役に立ったと考えています
役に立った
フィードバックを送信中...
フィードバックをお寄せいただきありがとうございます。
申し訳ありませんが、お客様の投票の記録に失敗しました。もう一度試してください。
違反を報告
レビュー を日本語に翻訳する

Lendrick
5つ星のうち3.0 Quirky but unsatisfying
2017年6月4日に英国でレビュー済み
Amazonで購入
Indiosincratic direction, some very good performances and stylish cinematography fail to make up for the lack of a coherent story, or that much of the film consists of unpleasant people arguing with each other.

Mikey
5つ星のうち3.0 Can he really fly?
2016年3月3日に英国でレビュー済み
Amazonで購入
This is quite a strange film based around a play being put on on Broadway by an aging and misunderstood actor played by Michael Keaton. The cast is very good and the story ranges from creepy to funny with a bit of fantasy mixed in - can he really fly? It probably deserved the awards it received and I enjoyed watching it, but I wouldn't put it in my top 10 favourite films. Worth a watch though.
続きを読む
2人のお客様がこれが役に立ったと考えています
役に立った
フィードバックを送信中...
フィードバックをお寄せいただきありがとうございます。
申し訳ありませんが、お客様の投票の記録に失敗しました。もう一度試してください。
違反を報告
レビュー を日本語に翻訳する

Anna C
5つ星のうち5.0 Michael Keaton aces it
2015年10月24日に英国でレビュー済み
Amazonで購入
Very good film made even better by the fab bluray picture. Michael Keaton gives a standout performance as a movie star who wants to be a respected stage actor having been given a chance on Broadway. Unfortunately, his flaws and foibles look like sabotaging his big prestigious break. An intelligent movie that's a welcome change from the trend in superhero movies, even though this is about a superhero. Or is it ...?
続きを読む
1人のお客様がこれが役に立ったと考えています
役に立った
フィードバックを送信中...
フィードバックをお寄せいただきありがとうございます。
申し訳ありませんが、お客様の投票の記録に失敗しました。もう一度試してください。
違反を報告
レビュー を日本語に翻訳する

Eric Lund
5つ星のうち5.0 This is a terrific movie from every angle
2016年8月11日に英国でレビュー済み
Amazonで購入
This is a terrific movie from every angle. It's well written, well directed, well acted but best of all, the cinematography is terrific. It uses the concept of making the whole thing look like a single shot, even though you are well aware that it can't be. Brilliantly executed, it never once ignores the characterisations, the narrative, the depth of emotion or the overall sense of the lead character's life falling apart from all angles. I could watch it again and again!
続きを読む
1人のお客様がこれが役に立ったと考えています
役に立った
フィードバックを送信中...
フィードバックをお寄せいただきありがとうございます。
申し訳ありませんが、お客様の投票の記録に失敗しました。もう一度試してください。
違反を報告
レビュー を日本語に翻訳する

E DONNELLY
5つ星のうち4.0 Love it!
2017年2月5日に英国でレビュー済み
Amazonで購入
Love this film! Everyone is great in it but my srand out actors are Edward Norton and Emma stone. A film about a fading movie star wanting to revive his career by staging a play on Broadway. I'm an actor so I can relate to a lot of the things in it. Its shot quite surreal but I feel most people would enjoy it.
続きを読む
役に立った
フィードバックを送信中...
フィードバックをお寄せいただきありがとうございます。
申し訳ありませんが、お客様の投票の記録に失敗しました。もう一度試してください。
違反を報告
レビュー を日本語に翻訳する