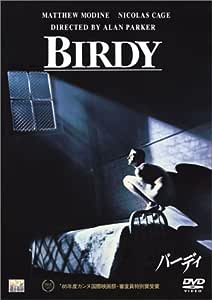 Keith M
5つ星のうち5.0 Parker’s Finest?
2016年9月22日に英国でレビュー済み
Amazonで購入
British film director Alan Parker’s 1984 film is an innovative, ambitious interpretation of William Wharton’s award-winning novel of the same name, arguably representing the high point of Parker’s career. Birdy is thematically very rich – at its heart focusing on Matthew Modine’s eponymous 'bird-obsessed’ outsider, coming of age in 1960s Philadelphia, and touching on issues of mental illness, repressive parenting, (homo)sexuality and the search for identity, but, with the advent of the Vietnam war, also, more directly, referencing shell shock, pacifism and the treatment of war veterans. Parker uses flashback narrative very effectively here, as the 'weirdo’ Birdy pals up (against type) with Nicolas Cage’s hunky, all-American boy, Al Columbato, their best-buddy antics being skilfully intercut with traumatic moments of war conflict and (most impressively) Al’s increasingly desperate (post-conflict) attempts to coax Birdy out of his mental malaise (in effect, a reincarnation in bird form).

The 25-year old Modine is outstanding here, mixing laid-back, innocent naivety and apparent derangement brilliantly – other than great performances in films like Short Cuts and Full Metal Jacket Modine’s career seems to have passed me by – whilst (the even younger!) Cage is almost as good, keeping his later tendency for histrionics mostly in check. The scenes between the two convincingly depict an ever-deeper, tender friendship – particularly those in the 'asylum’, during which cinematographer Michael Seresin gives us some stunning shots of Birdy and John Harkins impresses as the creepy, increasingly fractious Dr Weiss. Parker also gives us many intriguing (often comedic) interludes, such as during Birdy’s attempts to fly and his disinterested attempts at adolescent seduction.

It is, however, the depiction of Birdy’s mental state and imaginary world where Parker’s film scores most highly for me, whether during the dynamic flight sequences (where Peter Gabriel’s score particularly impresses) or during the various dream sequences, focusing on Birdy’s need for freedom and love of the natural world – there is a particularly powerful juxtaposition of his respect for living things with the destructive power of 'airborne things’ during battle.

I don’t consider Parker’s film as flawless – for example, I’m not sure how Birdy convinced the authorities that he was ‘fit for battle’ and Parker’s film is perhaps a little too long – but for Modine’s performance and the film’s level of ambition, I think it worthy of a top rating.
続きを読む
5人のお客様がこれが役に立ったと考えています
違反を報告
レビュー を日本語に翻訳する

G. E. Harrison
5つ星のうち5.0 Thought provoking but still entertaining film...
2012年1月9日に英国でレビュー済み
Amazonで購入
I'd forgotten how good this film is, I enjoyed it at the time of its release in 1984 but it is not often shown on television and I've not seen it since. However, it still holds up today, it's a real one-off that combines coming-of-age, anti-Vietnam-war and man-wanting-to-be-a-bird(?!?) themes to produce a thought provoking but still entertaining film.

Both the young Nicolas Cage and Matthew Modine turn in wonderful performances that are dramatically intense but totally naturalistic and are backed up by a small, sympathetic supporting cast. And although the central premise of the film (that Modine's character wants to be a bird) is a bit 'out there' because of the acting and the story telling we completely accept this. Director Alan Parker does a great job in both directing his cast and in pacing the film so that the flashbacks inform our view of the characters and keep the plot unfolding. Visually the film is stunning, the 50s locations, cars and clothes are all perfect. There is also a pronounced contrast between the boy's 50s Philadelphia neighbourhood which is rich and colourful and the scenes in the mental hospital which are enclosed and stark, with subdued lighting and muted colours. A superb film, with great work from all concerned.
続きを読む
4人のお客様がこれが役に立ったと考えています
違反を報告
レビュー を日本語に翻訳する

David Thackwray
5つ星のうち5.0 Classic film, Great Release
2019年10月31日に英国でレビュー済み
Amazonで購入
Indicator have done a great job on this remaster.
coupled with an interesting set of extras this is a worthy addition to any ones collection.
続きを読む
2人のお客様がこれが役に立ったと考えています
違反を報告
レビュー を日本語に翻訳する

CCR
5つ星のうち5.0 Fabulous film
2009年8月2日に英国でレビュー済み
Amazonで購入
If you have never seen this you've missed a treat. Its a story of male friendship, of two teenage boys in the USA a rare thing to see well protrayed. Oone of the boys becomes fixated upon the idea of being able to fly hence his nickname of birdy. It also relays the horror experienced by young men who get sent to war. The sound track is by Peter Gabriel and adds to the action well. Not quite as good as the book (which dealt with the World Wars rather than a later conflicts ised here) Never the less a touching film, it will have you laughing and crying. It is one of my all time favorites.
続きを読む
7人のお客様がこれが役に立ったと考えています
違反を報告
レビュー を日本語に翻訳する