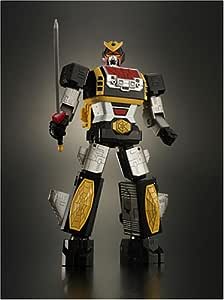 RoboGriffey
5つ星のうち5.0 It's Spider-Man's Giant Robot! What more needs to be said?
2016年5月2日にアメリカ合衆国でレビュー済み
Amazonで購入
One of the weirder members of teh Soul of Chogokin line, that I had never quite gooten to. Which is a shame because it is a strange little delight.

First up it fully gets an extra star just for the utterly whacked out and delightful subject matter. This is Spider-Man's Giant Robot! Say it with me again 'SPIDER-MAN'S GIANT ROBOT!" It doesn't get any better than that. For those not familiar, back in the 70's Marvel Comics entered into a two way licensing deal with Toei studios in Japan. The result was Marvel got to make Godzilla and Shogun Warrior comics, and Toho got the rights to do a Spider-Man show. And what a show it was. In fact it is a direct forerunner of the Super Sentai genre and thus Mighty Morphin Power Rangers. Anyway the Japanese Spider-Man show was a live action Tokusatsu show. Japanese Spider-Man had among other toys, that his US based counterpart could certainly never afford, a Souped up crime fighting Spider-Man car... and his Giant Robot/Spaceship the Leopardan. (Called that because in Spaceship form it reassembles a Lion in Repose. Don't try and think it through, just go with it.)

Well this Soul fo Chogokin entry gives us the full package. First up is the Robot itself. Some may be disappointed as this is one of the smaller SOC's. Being about the same size as Danguard A and Battle Fever Robo (his Tokusatsu succesor). I personally love this sized robot. While I do also love the big guys, sometimes these smaller to more mid sized ones can be better. Lots of detail and fun, without as much shelf space. The Leopardan Robot is a fairly standard and superb example of Bandai's SOC Engineering. He comes out of the box lacking his crest and arms. The crest because it is a spring loaded firing missile (yeah that will be lost in seconds) And the arms because you have the choice of fully articulated arms or perfect transformation arms. To be honest the perfect transformation arms look a little better and also have a spring loaded rocket punch that the regular arms lack, but have the drawback of not having any shoulder tilt or pivot. In robot form the only real noticeable negative is the large chunk of back kibble that is the lions head. This is unfortunately accurate to the show. (Tokusatsu, so the on screen robot was a guy in a cardboard suit) It breaks up the sleekness a bit. The color scheme of the robot is in a word hideous, and in no way reflective of Spider-Man, with its Black Gold and Red. But is once again dead on to the show,a nd certainly stands out among the other robots in your collection. The only other one that comes close to it is Daltanious.

Transformation is problem free and smooth, and fairly intuitive. No tricks or weirdness. And with the correct arms in place no real parts swapping beyond removing the head crest. The resulting Leoparden spaceship is... well its a technocolored lion statue. Like those things in front of the New York Library after they have been graffiti tagged. It's cool, and kind of grows on you. But yeah you'll do it once then forget about spaceship mode. Cause it's all about Spider-Man's Giant Robot!

Accessories include Spider-Man's giant sword and shield (what you never saw those in the comics?), a teeny Spider-Man figure. A nearly microscopic version of his Spider-Man car that is in scale to the robot. A larger Matchbox Car sized version of the car that is gorgeous and is well worth getting the set for for it alone. (It's about the same size as the Mach Pursuer from Daitarn 3). A nice stand that holds everything and has pop out panels for the cars to park. And then we have the strangest thing in the set. The big Spider-Man figure.

I am a little puzzled by this inclusion? They give us what looks to be a 1/12 scale Japanese Spider-Man vinyl figure. Sadly more of a statue. The only articulation on it is at the shoulders. It's extremely well painted and is a version of Spider-Man that most western fans will not have in their collection. The Takuya Yamashiro Spider-Man with his alien wrist control unit for his robot. The figures great. Nicely painted. It really stands out and draws the eye. But it's almost as big as the robot itself. It takes up half the box and gets a window cutout so it can be seen. Why? If you are buying this thing it is likely not for an unarticulated Spider-Man vinyl figure that towers over your robots? Getting the figure in hand your first thought is "Damn! I really Hope Bandai makes a SH Figuarts Spider-man figure soon!" After that it either goes back in the box, or gets dumped in with your Marvel Action figure collection. It really adds nothing to the robot set that was not already covered by the little 1/72'ish figure.

Overall this is a great member of the SOC family. Especially as it is a fair inexpensive one so it makes a nice piece for a collector just starting out or with limited space. Plus it is one of the few examples of the live action Super Sentai / Tokusatsu robots getting the really high end untra detailed treatment. (If you do like this guy I also suggest hunting down the Battle Fever Robo as well.)
続きを読む
8人のお客様がこれが役に立ったと考えています
役に立った
フィードバックを送信中...
フィードバックをお寄せいただきありがとうございます。
申し訳ありませんが、お客様の投票の記録に失敗しました。もう一度試してください。
違反を報告
レビュー を日本語に翻訳する