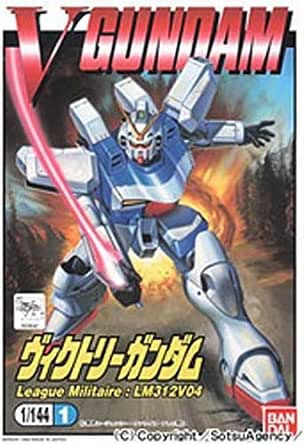 S.Anonymous
5つ星のうち3.0 Not an HG, but OK for an early NG kit
2015年1月8日にアメリカ合衆国でレビュー済み
Amazonで購入
Don't be fooled by the title--this is NOT a high grade kit. This is BAN39047, which I think was the first model released in the 1/144 Victory Gundam model series back in 1993. As such, it is an older NG-like kit. I think this is one of the first kits to actually use polycaps. The MS is molded in color on two runners that are designed so you can snap the two together before removing the parts in order to speed assembly. In addition, there is also a smaller runner of polycaps (one of the earliest Gundam models to use them, I think--they almost form a very crude skeleton here), a runner of clear/pink effect parts, and a separate yellow v fin. The box is just a touch smaller than modern "advanced grade" boxes I've seen, and the parts count is much, much lower than you'd expect for a true HG. There is one small sheet of stickers, including the main sticker for the chest detail, and a postcard-sized photo "backdrop" to use for posing LOL The instructions are one page and assembly is very straightforward. It does include a small stand.

Overall, this kit isn't bad for what it is. I'm looking forward to putting it together and detailing it. Just be aware that it is an early non-HG model and you should be fine.

UPDATE: Now that I've built this kit, I can give a bit more detail. It is more articulated than an advanced grade, but significantly simpler than an HG. The mold quality is not nearly as good as more modern Bandai kits, with some more obvious mold lines and a bit of flash, and sometimes indistinct or poorly defined panel lines. Also, this guy is SMALL, noticeably smaller than my other 1/144 MS models. It does come with a small stand that holds the photo backdrop behind the Gundam, while also holding the MS up for posing. The stand is molded in clear pink on the same runner as the shield and sabers. Articulation-wise, it uses ball joints for head, shoulders, hips, and front/side skirts. Ankles use a ball plus forward/back rotation joint. Knees and elbows use simple pins that allow rotation. The waist is attached to the skirt with a peg and only allows rotation, not bending. Overall, though, it is quite a bit more mobile than an AG model. In addition to the (one piece) rifle, he comes with the clear pink effect shield and two clear pink beam sabers--one straight and one curved. Both sabers are one piece, with the handle molded together with the blade out of the same clear pink. There is one small sheet of stickers that are somewhat poor by modern kit standards. Most of them go over curved parts and it doesn't look like they'll stay on long. The biggest includes the colored areas on the main chest piece.

After building this little guy and detailing him, I'm pretty happy. Despite the age of the kit, it was still fun to put together. The panel lining was hard to do well because of the molding and the tiny size (compared to other HG kits), but I was surprised how much life the extra detail gave the model. The head in particular looked really nice after detailing. I did have to hand-paint some spots, including the chin (didn't want to use that wrap-around sticker!) and the thrusters on the backpack and rear skirt. The backpack is a single white piece and looks pretty lame unless you work to dress it up. Overall, though, it was satisfying to put time into this one.
続きを読む
2人のお客様がこれが役に立ったと考えています
違反を報告
レビュー を日本語に翻訳する