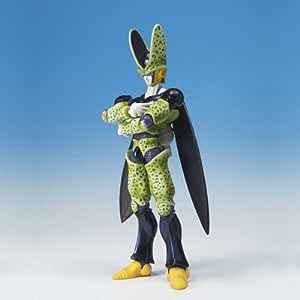 dapperdishboy
5つ星のうち1.0 A Good Paint Job is All This Toy Has to Offer.
2009年9月14日にアメリカ合衆国でレビュー済み
Amazonで購入
When I bought this product, I was expecting to be able to use it for more than just standing there, but all of the articulation and joints are wasted by a poor overall product. In the package, the toy looked amazing, just waiting for me to open it, and get my hands on it. The excitement built a bit, but once I untied it from the plastic bindings and grabbed it for the first time I knew something was wrong, very, very wrong! His arms were left in the package. It made no sense, I took it out so carefully, what had happened?

Well it turns out that the developers didn't make the product like any action figure i had seen in the past. When I was younger, if an arm ever fell off one of my action figures, it could be popped/snapped back onto the ball joint that connects to the rest of the figure. This and the other "Dragonball Z Bandai Hybrid Action Mega Articulated Action" figures do not have ball joints that pop in and stay locked on. What they have is a peg with no size variants and nothing to hold it in, except the loose hole they originally fit into. So, in other words, these toys are going to fall apart all the time. No need for rough play here, just a tug and both his arms can come out.

This was by far the funniest action figure of the fall-apart-fest for these specific toys. I took him out of the box and both of his arms were still stuck in the box. After pulling them out and putting them back on, I noticed these pegs were wide, but so short that even regular arm movement disconnected his arms from his body. While I was trying to keep his arms in I noticed his legs were really loose. Within five minutes of him being open his whole body was in pieces (the only two that stay connected were his head and part of his upper body). His wings don't stay on well at all either.