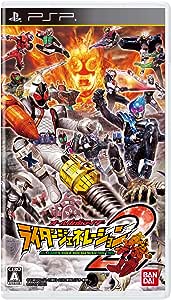 Since the DS version of this game is already reviewed by one person(so far)here on Amazon, I decided to be the one person who will review the PSP version. :)

There are only a few minor things in the PSP version that they add in this game that you won't see in the DS game, but like I said, they are both the same game, just graphically different. It's a fun beat-em up game. You don't really have to know any Japanese to play this game(I dont).You just pick your rider you want to play as, and you pick your partner rider to join you. You select your stage and have fun beating the crap out of enemies. You unlock different playable characters throughout the game.

Overall, this is definetly an awesome and fun game if you're a Kamen Rider Fan. If you have a DS and you don't have a PSP, and you want to get this game, then it's not a bad choice to get the DS version. Again, it is the same game, game play is the same, the graphics may look washed out from the PSP version, but it's still a fun side-scroll beat-em up. But if you like the graphics and how it delivers, then get a PSP and this game. Of course if you have a PSP already, then by all means, DEFINETLY get this game! :)

The only thing I would say that I don't like in this game are the running stages. I wondered who came up with this idea to put that stage in this game and why. It does frustrates me in this game. :) But at least there's only two of them and the rest of the stages are beat-em up fighting stages where you fight enemies and bosses. This game was released, the time when Kamen Rider Fourze was airing. So essentially, this is Fourze's game. Fourze is an awesome series too, by the way. :) Have fun with "ALL KAMEN RIDER RIDER GENERATION 2!" RIDE GENEC KITAAAAAAAAAAA!!!!!!
続きを読む
役に立った
フィードバックを送信中...
フィードバックをお寄せいただきありがとうございます。
申し訳ありませんが、お客様の投票の記録に失敗しました。もう一度試してください。
違反を報告
レビュー を日本語に翻訳する