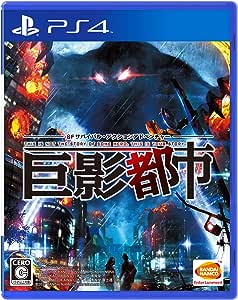 Broku
5つ星のうち5.0 A game with promise, but it can tease
2018年5月25日にアメリカ合衆国でレビュー済み
エディション: 1) 通常版ソフトAmazonで購入
Whenever you watch a giant monster movie from Japan, you always see hundreds of people running through the city streets screaming in fear. Well... Ever wonder what it would be like if you were one of those people?

City Shrouded in Shadow is a game that allows you to see a Kaiju invasion from the view of a civilian just trying to stay alive. In short this is a video game of the 2008 movie, Cloverfield. As a added bonus, this is also a RPG, meaning you can choose what your character says and does. You can even choose your character's name and appearance. Thus the reason the title says, "This isn't the story of some hero, this is YOUR story" however you should know that your choices don't affect the overall story to a great degree. Meaning the story won't have great changes to it such as running down a different street leading to a whole new level, thus leading to a whole new game ending. There is only one story route to progress through

There's almost a dozen costumes to pick up from ordinary business suits, a fireman suit, and even a JSDF suit. There's even several options for your hair. However you either need to buy a few of these suits or search very carefully in each level to find them.

From what I understand, this game is based off another game known as Disaster Report. another game where you play as a civilian during a city wide crisis. though I have never heard of this game until recently

The overall game isn't very long. 17 levels at most. I've been hearing the game will have DLC with more monsters and more levels so we'll have to see what improvements can be made. But what helps make the game longer is the side quests you find. You'll have NPCs asking you to rescue someone, bring them certain items, or ask you to dress up into different outfits. However, many of these mini-quests are hidden so you'll have to keep your eyes open to spot them

Also, be aware of QTE (Quick Time Events) This game is loaded with them and you'll be killed often if you're not on guard.

When I heard this game was a multi crossover of these famous icons I was immediately sold. Unfortunately the bad news is that these characters never meet with each other. You won't bee seeing the Evas teaming up against Godzilla, or Ultraman helping Gamera fight aliens, or King Ghidora battling against the 13 Angels. You'll only be seeing Godzilla fighting against other monsters from his world, Evangelion fighting against the Angels only, and so on. To me, this game was a big tease. We have all these famous giant monsters and anime mechs in the same world together, but we don't see them at each other's throats. I would love to see Godzilla fighting against Eva-01 while she's berserk. I wanted to see the 13 Angels fighting with Kaijus to see the servants of god battling with mother nature's fury. But unfortunately... No... So I was pretty disappointed. However I still enjoyed this game nevertheless. I just hope someday in the future that someone will make a game where we actually see these mechs and monsters clash.

Anyway, this is still a good game showing you what the civilians go through whenever a monster is attacking and the heroes are off saving the day. However if you are unsure, then it'll be better if you watch walkthroughs of the game first as it can be a underwhelming experience for those with high expectations. I mostly enjoy it for bringing iconic monsters and mechs under one roof, even though we don't see any cross over fights. Still, I hope this game sparks a sequel someday
続きを読む
10人のお客様がこれが役に立ったと考えています
違反を報告
レビュー を日本語に翻訳する

jeff
5つ星のうち5.0 Cool game!
2019年8月25日にアメリカ合衆国でレビュー済み
エディション: 1) 通常版ソフトAmazonで購入
i picked this up because the first Ultraman is in it from my childhood and it doesn't disappoint. However to play this I am following a few people on YouTube because it's not in my language. It is very fun to play nonetheless with all of it's choices to make style gameplay. I'm not fond of this type but everyone involved did a great job producing a interesting game!!
続きを読む
2人のお客様がこれが役に立ったと考えています
違反を報告
レビュー を日本語に翻訳する

Anthony
5つ星のうち4.0 Awesomeness transcends language barriers!!
2019年6月5日にアメリカ合衆国でレビュー済み
エディション: 1) 通常版ソフトAmazonで購入
Works on US PS4! Had lots of fun even though I don't understand Japanese. The game has a lot of action and the controls are simple so ya don't gotta worry about crazy tutorials. I used Google translate sometimes when I wanted to understand some of the choices you can make in the game. The game doesn't run great at times, and has a 5gb patch, but it's fun and definitely worth a play through.
続きを読む
2人のお客様がこれが役に立ったと考えています
違反を報告
レビュー を日本語に翻訳する