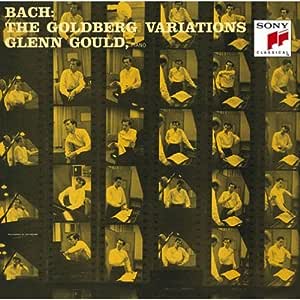 Sarugumo
5つ星のうち4.0 Goldberg Variations
2011年6月11日に英国でレビュー済み
Amazonで購入
Interviewing a musician on my blog recently (Steve Poltz) about his musical influences threw up some great new music for me to try. I promptly bought a selection of the music he suggested and Glen Gould playing Bach: The Goldberg Variations was one of the of these.

This is a pared back recording of Gould playing each short piece in turn and the sound of just Gould and a piano is especially soothing. The playing is technically proficient and showcases Gould's skill and nuanced touch to full effect.

This has a selection of outtakes at the end as well where you can hear Gould recording some tracks and receiving some guidance from the producer. You can also hear Gould (who has Aspergers syndrome) humming along in the background, which to my mind actually adds to the recording. Some people don't like this, but I feel it adds a human touch to what could be quite a clinical piece otherwise.

This is the remastered 1955 recording which launched Gould's talents to the wider world and whilst there isn't much new for those who have the existing performance, the sound here is clear and crisp and the outtakes add a certain element, even if just for curiosity.

Poltz recommended this as his ideal dinner party background music and I am inclined to agree. It is subtle, but with enough depth to reflect upon if you so wish. It is unobtrusive and meticulously played and if you wish to give this a try I can heartily recommend it. I have enjoyed it immensely since I bought it and anticipate continuing to do so over the coming years.

Feel free to check out my blog which can be found on my profile page.

J. Mincham
5つ星のうち5.0 Gould's early Goldbergs.
2013年1月9日に英国でレビュー済み
Amazonで購入
By rights one should have both of Gould's recordings of what many think is the greatest set of baroque variations. I was a student when this recording and his version of the italian Concerto hit the scene. They caused immense ripples and generated much critical interest.
Do they stand up well today nearly 60 years later? Well apart from the fact that most people now expect them to be performed on the harpsichord, I would say yes, they do. One tends to forget the instrument choices by the time you are into the second variation and begin to enjoy them for what they are--insightful and technically brilliant performances of an immortal work. Julian MIncham

Mr. A. PICKUP
5つ星のうち5.0 Wonderful, wonderful playing
2019年7月19日に英国でレビュー済み
Amazonで購入
I had only heard the later version, and loved it, but don't listen to it at all now. This is probably the best piano playing I have ever heard. I'm not surprised it is still popular, over 60 years later. Sound quality is excellent, too.
続きを読む
役に立った
フィードバックを送信中...
フィードバックをお寄せいただきありがとうございます。
申し訳ありませんが、お客様の投票の記録に失敗しました。もう一度試してください。
違反を報告
レビュー を日本語に翻訳する

Avatouir
5つ星のうち5.0 Enjoy with a good Chianti
2014年8月30日に英国でレビュー済み
Amazonで購入
For a recording made in 1955 the sound on this disc is pretty good. Small wonder that this version has been used in at least 3 of the Hannibal Lector films. But there's more to this then Variation 30. Bach originally wrote his Goldberg variations for Harpsichord but the transition to piano does no disservice to these brilliant compositions (and tbh I'm not really a big an of harpsichord). Admittedly though this is not as easy to get into as some of Bach's concertos (speaking as a relative newcomer) as it is purely the one instrument but if you love Chopin and piano music in general an essential purchase.
続きを読む
役に立った
フィードバックを送信中...
フィードバックをお寄せいただきありがとうございます。
申し訳ありませんが、お客様の投票の記録に失敗しました。もう一度試してください。
違反を報告
レビュー を日本語に翻訳する

Mrs. Rp Meinke
5つ星のうち4.0 Glen Gould playing the Goldberg Variations by Bach
2009年4月19日に英国でレビュー済み
Amazonで購入
Bach's keyboard music can take so many styles and approaches, but none can better Glen Gould's original touch and manner.
He is genius, and seems to have J.S. Bach's ear for phrasing and expression and a great love of his music.
He can however be heard humming to himself as he plays at one or two points.
This does not actually detract from the performance but emphasizes his "empathy".

levelheaded
5つ星のうち5.0 Gould the mould-breaker
2014年1月30日に英国でレビュー済み
Amazonで購入
Still a marvellous, exciting reading of the Goldberg after all these years, despite his later recording slowing down all the tempi. If you're new to classical music, Gould's two versions are a must, providing such a clear example of how much a top class musician can change his view of a great work.
続きを読む
役に立った
フィードバックを送信中...
フィードバックをお寄せいただきありがとうございます。
申し訳ありませんが、お客様の投票の記録に失敗しました。もう一度試してください。
違反を報告
レビュー を日本語に翻訳する
その他の国際レビューを読み込む