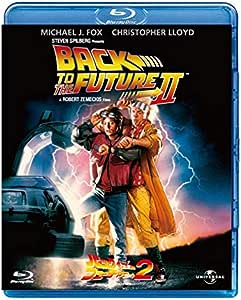 Ben30
5つ星のうち5.0 NEW HD TRANSFER FOR THE CLASSIC SEQUEL TO FIRST BACK TO THE FUTURE, PLUS NEW SPECIAL FEATURES
2015年1月24日に英国でレビュー済み
Amazonで購入
An excellent sequel to the 1985 classic, i think this sequel is just as Good as the first in my opinion anyway
screenplay/story written by both Bob Gale & Robert zemeckis but Directed by Robert zemeckis

scrap the very old dvd release of this film
get this new blu-ray quality of Back to the future II
Universal has again given the picture quality a new HD transfer & it looks beautiful in 1:85:1 widescreen
very sharp & clear picture quality just like the first Back to the future blu-ray
again a new 5.1 Master audio mix has been given to which makes a big Difference to the sound quality for sure

Universal have also added a new 30min retrospective Documentary just for this blu-ray release
TALES FROM THE FUTURE-TIME FLIES
new in depth interviews about the sequel
with again Bob Gale, Robert zemeckis, Steven spielberg, Frank marshall, Kathleen kennedy
Cinematographer Dean cundey, Production Designer Rick carter, costumer Designer Joanna Johnston
plus new interviews with Claudia wells who played the original Jennifer parker
she explains how she was asked to reprise her role for the sequel
but she had left the Acting business in 1986 due to very personal issues in her family
and so Actress Elizabeth shue was brought in to replace her
unfortunately Elizabeth shue was not interviewed for this Documentary maybe she was not available
but the usual Actors from the first back to the future are still interviewed
Michael J Fox, Christopher Lloyd, Lea Thompson, Marc McClure, except for Crispin Glover & Thomas F Wilson
Actress Wendie Jo sperber who played Marty's sister Linda McFly is also not interviewed
cause she passed away back in 2005 from Breast cancer

plus all the old special features from the 10 year old dvd release
making Back to the future II 1989 TV promo broadcast hosted by Leslie nielson
plus the old DVD Documentary
BACK TO THE FUTURE-MAKING THE TRILOGY PART II
PHYSICS OF BACK TO THE FUTURE PART II, 8min featurette about the Franchise
all the Featurettes about the Production of the film
Designing the Delorean, Hoverboard test, Evolution of the visual effects shots, Photo Galleries
Deleted scenes, outtakes with optional commentary by Bob Gale
plus the old movie length dvd commentary by Bob Gale & Robert zemeckis is still included on this blu-ray
all this one 1 blu-ray Disc, incredible

BITW91
5つ星のうち5.0 "The Future"
2016年2月6日に英国でレビュー済み
Amazonで購入
One of my favourite childhood favourites from the 80s, and the amount of times I have seen this film, I could never ever get bored of this sequel to the original Back to the Future (1985).

I have had this film on VHS and DVD, but now I have it on (HD) Blu-ray where both the sound and picture quality is spot on.
続きを読む
役に立った
フィードバックを送信中...
フィードバックをお寄せいただきありがとうございます。
申し訳ありませんが、お客様の投票の記録に失敗しました。もう一度試してください。
違反を報告
レビュー を日本語に翻訳する