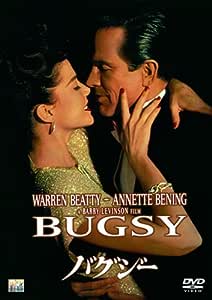 Barry Levinson's epic film didn't turn out to be the mobster film many had hoped for. There was great anticipation that this would be Levinson's Goodfellas. What ultimately came to pass was a film of epic scope and detail, alive not with violence and mobster edginess, but of romanticism, of visionary peccadilloes and of folly. This is both a blessing and a curse, for Levinson seems to be caught in two minds between being respectful to his main characterisation, or unleashing the beast as we know it.

Story concerns itself with Siegel being sent to tidy up West Coast operations, from where he would fall in love with starlet Virginia Hill and become one of the most prominent names in Hollywood of the 40s. Whilst the pic has moments where Siegel seethes and teeters on the edge of murderous rage, much of the history here is scratchy to say the least, where again Levinson and Toback ignore just what a nasty piece of work Siegel was in real life, and instead put dreamy ideals and hot to trot passions in instead.

It's all perfectly mounted, this is very good film making, it just always seems to be on the periphery of making a telling contribution to the Siegel legacy on film. Beatty is dandy and ever watchable, but this is not a Bugsy Siegel we can identify with, rendering an air of falseness to the story telling. The support cast are strong, though Mantegna as George Raft is miscast, but the likes of Kingsley and Gould make telling contributions with only morsels to feed off of from the screenwriter.

In its longest form it runs at two and half hours, and it's testament to the film maker's craft that it always maintains interest. Yet the various splinters trying to dovetail into one never quite make it and that's a shame. 6.5/10