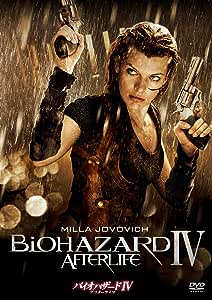 Ben
5つ星のうち4.0 Beautiful visuals and soundtrack make up for any true depth
2014年11月23日に英国でレビュー済み
Amazonで購入
Okay so if you have watched the previous three entries in the RE movie franchise you know your what to expect, this fourth instalment has had a lot of negative criticism for the slo-mo and moments catering for its 3D based moments, to its credit this doesn't really affect the translation to dvd and it's a minor gripe in the overall impact the movie has, the first and final acts are both pretty flat but the main part (prison) is actually good fun and has some interesting characters, obviously this isn't Shakespeare but the writing is passable and the acting is good/average. The visual side is stunning with the dirty dark style of the prison coming off very well but the ultra clean and fairly barren Arcadia fight looking out of place, the soundtrack is fantastic and the films strongest feature, a classic sci fi and 'end of the world' score continuing throughout. For a action film that doesn't require much thought the film works well and Milla is great as Alice, she knows her strengths and weaknesses and it doesn't require any more than just a fun vehicle to show her screen time. Give it a go this is far more entertaining that 'Retribution' and equally as good as 'Extinction' and the original movie, pass on 'Apocolypse' if you can it's the least enjoyable.
続きを読む
違反を報告
レビュー を日本語に翻訳する

Mr. Richard J. S. Blake
5つ星のうち4.0 Resident Evil: Afterlive
2012年6月9日に英国でレビュー済み
Amazonで購入
Resident Evil 1 was a good on-take on how the virus gets out and not all the films can be like the games which is where I though Resident Evil Apocalypse kinda went wrong with mixing a very good on-going hunting boss (Nemesis) with the Raccoon City incident but then again they played the games and I thought it wasn't all that bad if they mixed two games in together, Resident Evil Extinction was good to say that everywhere was hopeless but survivors keep hope up and Alice breaks into the Umbrella Corporation Facility to face the only best boss or original Tyrant, that's the Resident Evil films from 1-3 in short.

Resident Evil Afterlive I actually loved more than Resident Evil Extinction, though the game was weak it bases itself more on a game finally than originality though it has that in it too, it's based on Resident Evil 5 bringing Albert Wesker into it and trying to get rid of the executive Umbrella director except that he takes in Alice's powers and makes her human or so he thought. Alice travels to Arcadia where she receives a radio link after going down with Wesker, somehow surviving the plane crash which the plane is Wesker's plane from Resident Evil 5. Alice finds Claire Redfield but only to know she has memory loss and the takes off the human control device that Jill had on in Resident Evil 5 for Wesker's experiments. Alice finds herself with a few people who are trapped in a jail facility where the only problem is where Chris Redfield is taken hostage, mistaking him to be a killer but only Chis knows the way out. Zombies that have the Las Plagus virus get inside and they have to get over to a ship called Arcadia where I thought, hell yeah Resident Evil Revelations which I was wrong, luckily Axe Man or near to Pyramid Head chases after them. And what an ending to face Wesker T-Virus (super human) way, head on and do a couple of fight scenes that were more like cut scenes in Resident Evil 5.

Good Side:
1: Follows a lot of details you would recognise from Resident Evil 5
2: An original story that makes it look like it could be a live actor's ride
3: More use of Claire Redfield
4: Wesker is used more in this than two or three short scenes in Resident Evil: Afterlife, Wesker rules!
5: Axe Man as I call him makes a good comparison with Silent Hill
6: Good storyline

Bad Side
1: Chris Redfield is more demanding and the director could have casted him with at least darker hair or a S.T.A.R.S. uniform on
2: Too much slow motion paced Matrix alike action
3: Too many clones I prefer Alice as just one main amazing survivor which eventually happens so it ruined the intro a fair bit
4: Got rid of Wesker in a bad way, I always like Wesker returning
5: Could have mixed Resident Evil 5 with Resident Evil Revelations and that one fighting scene with Chris and Wesker from Code Veronica X

In total a good film that is a hell lot better than Resident Evil: Afterlife, though Resident Evil 5 repeats itself and tried to copy Resident Evil 4 (game wise) good use of Resident Evil 5 comparison, Wesker always gets killed so please bring him back because like the Terminator Wesker is always back and hopefully he'll return in Resident Evil 6 or 7, a lava pit can't stop him but film wise I still prefer Resident Evil 1.

8/10 would be my rating for Afterlife, I hope this review was helpful :)
続きを読む
1人のお客様がこれが役に立ったと考えています
違反を報告
レビュー を日本語に翻訳する

Stacey
5つ星のうち5.0 Resident Evil: Afterlife [Blu-Ray 3D] Ultimate 3D Experience
2012年1月25日に英国でレビュー済み
Amazonで購入
The Resident Evil series is one of my all time favourite saga's, and this film is no exception to that. The film was shot in 3D making it an ultimate 3D experience for anyone who ownes it and watches it. If your looking to really test out your 3D this film will blow your mind. (Please note that 3D tv's should have a version 1.4a HDMI cable for playing 3D films).

Resident Evil: Afterlife the story is strong but not complex and will not move mountains, the one thing the film does at times feel plastic and unrealistic due to the amount of green screen and lacks the feel of reality at times. Something that hopefully will be addressed with Resident Evil: Retribution.

The film has an abundance of eyecandy and is non stop action and (Milla Jovovich) is once again brilliant as Alice with (Ali Larter) holding her own as Claire Redfield.

If your looking to switch off for 90 mins and you are looking for the ultimate 3D experiance Resident Evil: Afterlife will blow your mind.
続きを読む
1人のお客様がこれが役に立ったと考えています
違反を報告
レビュー を日本語に翻訳する

SmartE
5つ星のうち4.0 Alice is coming for you
2015年5月7日に英国でレビュー済み
Amazonで購入
watched it in 3D
Awesome film - but then we are biased having watched each of the "Resident Evil" films several times over.
First viewing of this film and it didn't fail to entertain us, living up to past productions in terms of graphic quality, special effects and story line following Alice on her travels.
Would recommend to anyone wishing to watch a 3D film in terms of superior graphics.
続きを読む
1人のお客様がこれが役に立ったと考えています
違反を報告
レビュー を日本語に翻訳する

Jonnybgood
5つ星のうち4.0 Good film to showcase 3D
2011年7月20日に英国でレビュー済み
Amazonで購入
There isnt much "none" animated 3D content/movies at current and have found the RE films an okay watch and only purchased this as was cheap for a 3D film (to see what a none animated 3D film was like). I was actually very surprised and this is my favourite RE film with more structure and variety than previous carnations with slightly less OTT action than the last one. The 3D is great and constant throughout the film and the shower scene is easily the best part of the film (you need to see that bit) for the price anyone who likes a zombie or action film should add this to their collection as they won't be dissapointed.
続きを読む
1人のお客様がこれが役に立ったと考えています
違反を報告
レビュー を日本語に翻訳する
すべてのレビューを参照します
Amazonプライム会員ならお急ぎ便、日時指定便が使い放題
さらに、映画もTV番組も見放題。200万曲が聴き放題 。クラウドに好きなだけ写真も保存可能。
> プライムを無料で試す