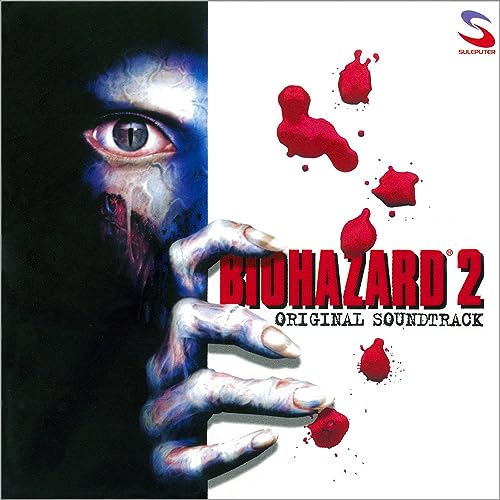 Eric
5つ星のうち4.0 Classic Survival Horror
2014年3月30日にアメリカ合衆国でレビュー済み
Amazonで購入
Resident Evil 2 was hands down my favorite of the series. I have many reasons why RE2 was my favorite, but right now I'm only discussing the music. Each track is perfect; the safe room music makes you feel safe while still making you question what's waiting just outside the room, the police station main theme is chilling with those icy cold piano notes and bell sounds, then there's the police station basement theme, so subtle, yet unsettling to the extreme. I remember entering that basement for the first time on my original playthrough and the instant that music started I could hear the clicking of multiple dogs nails on the concrete, I immediately turned my character around and went back up the stairs. Nope, just nope.

As a disclaimer, this soundtrack is incomplete. It contains the core music (which is still great), but many little tracks, many of which played in various cinemas or obscure little situations, are not included. I also own another RE2 soundtrack, one with a cover that looks like flesh and an ear titled Biohazard 2 Complete Track, that soundtrack contains the rest of what this soundtrack is missing. So if you're looking for all the music you'll likely have to buy two different soundtracks. If you enjoyed Resident Evil 2 and enjoy game music, I recommend this very much, but keep in mind it's incomplete.
続きを読む
1人のお客様がこれが役に立ったと考えています
違反を報告
レビュー を日本語に翻訳する

Jake
5つ星のうち5.0 An amazing soundtrack that's worth pumping on your stereo
2016年6月5日にアメリカ合衆国でレビュー済み
Amazonで購入
I'm not one of those who fancies the second Resident Evil in front of the first, as most people seem to prefer the second one. However, I am willing to admit that Resident Evil 2 is a masterpiece and one of my favorite games of all time. The combination of horror and loads of zombies in an urban setting is great, and there's a lot of scares along the way, and great plot too.

One thing that's undeniable, and that I like more about the second game as opposed to the first, is the music. Much better recorded, with better sounding instruments, and overall more well-composed music.

What fascinates me about film music is that when you've seen the movie (and the soundtrack is really good and adds to the experience), hearing the soundtrack on its own, without the movie in front of you, paints the scenes in your mind. That is what happens when i listen to this soundtrack, when I listen to the intro song I remember when Claire ran away from the first zombie she encountered when arriving in Raccoon City, and then bumped into Leon who told her to "get down!" as he shot the zombie behind her. I remember the desperate atmosphere that the piece "police station 1st floor" contributed to when walking about there, and finding the document about the police shootout and the police discovering the "licker" monster for the first time. Not to mention that bang at the end of the song makes one think that a group of zombies (or something worse) have broken in through a door or window. Great stuff.

Then there are songs like "police station basement", which uses slow moving and haunting synthesizers with long, descending portamento, which just adds tons to the atmosphere. The dogs lurking in the basement are one of the creepiest moments in the game, and its always hard to know how to kill them since the camera angles obscure them alost entirely.

I could go through every song like this but the point is that Resident Evil 2 has a very well-made score and could easily qualify as one of the best video game soundtracks of all time. The blend of orchestra sounds, with that reverberized piano, the reoccurring synths, and any other sounds that go along with the mood, makes it awesome. There are boss fight songs, atmospheric songs, specific songs for specific rooms, dramatic ending music, and even an instrumental, hard-rocking "real ending" song with superb guitar soloing. So there's a bit of everything here. But the price is a bit high for a CD, I'll admit that, so in the end I'd mainly recommend it for the fans who loved the music in the game.
続きを読む
違反を報告
レビュー を日本語に翻訳する

Anthony Redfield
5つ星のうち5.0 Resident Evil 2 Original Soundtrack
2009年3月5日にアメリカ合衆国でレビュー済み
Amazonで購入
Resident Evil 2 was one of the most popular games when it released in 1998. Resident Evil 2 graphics weren't so great and the voice acting was decent, but the mini clips and the non stop action plot made it up. To this day, it is still played by millions of people and no one will never forget the game. What made the game so great were the characters and the music. Finally, Capcom release the soundtrack of Resident Evil 2. Everything is included, When Ada dies in Leon's arms, Introduction of the movie, Capcom included everything in the CD.

What made this CD impressive was how the songs were placed in order. It starts from "The Beginning Of Story" to "Credit Line". Everytrack in the game is in the CD. "Leon With Claire" can be heared when Leon is in the R.P.D Office and he reads Chris Diary. Claire comes in and the track will kick in. "Secure Place" is heared everywhere in the game. You can mostly heared it in the safe rooms. "The Underground Laboratory" is one of my personal favorites. The track can be heared when you are in the underground facility. "Good Bye, Leon.." is heared when Leon is in the underground facility. When Leon is about the escape, Ada comes and demands Leon to give the virus. Leon won't give her the virus and Annette shoots Ada. Ada struggles and is about to fall off the edge when Leon grabs her hand. The track will kick in.

I highly reccommend that this CD to everyone that loved the game or loves the series. The soundtrack is eerie and will send chills all over your body.
続きを読む
違反を報告
レビュー を日本語に翻訳する

Tom
5つ星のうち5.0 The item came on time in perfect condition and plays great!
2013年6月29日にアメリカ合衆国でレビュー済み
Amazonで購入
This is a very good soundtrack. Fans of the game will enjoy it for sure. The quality of the soundtrack was very good and the supplier was accurate in their description of the item. I highly recommend this as a great buy.
続きを読む
違反を報告
レビュー を日本語に翻訳する
すべてのレビューを参照します