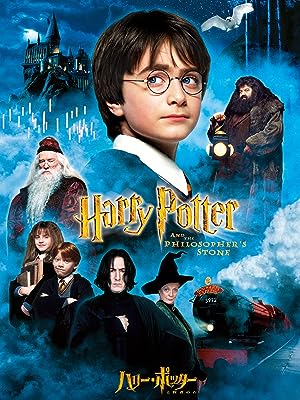 Stampy
5つ星のうち4.0 Spirited start
2009年3月6日に英国でレビュー済み
Amazonで購入
Raised by a family who detests him, Harry Potter (Radcliffe) learns he is a wizard and soon finds himself at school of magic Hogwarts.

It's hard to imagine in the 90's J.K Rowling being rejected a contract for her wizard series. The Harry Potter franchise has spun further than many anticipated and this film reminds us of the moment when the franchise really took off and some magic really happened.

Almost 8 years ago now and current renowned teen stars Radcliffe, Watson and Grint star in their first roles as the famous friends Harry, Hermione and Ron, all with a magical gift. So the acting is far from perfect, it hardly matters now when you watch the series as the actors learn from their mistakes and we see them growing up and facing more challenging tests, for their characters and for themselves.

It is however the older actors who generate the magic of acting. Alan Rickman was born to play Snape whilst Richard Harris fits the role of Dumbledore like a glove.

But this is all about the story of a young unappreciated boy who was born in a different lifetime from his adoptive parents the Dursleys. Struggling under the strain of life Harry is thrown a lifeline when he arrives at Hogwarts, a chance to make friends and live life as he wants. This is an entertaining 2 hour picture that generates laughs, mystery and excitement in the form of a different world. The concept of magic is always tricky to cover in terms of realism but J.K Rowling's imagination is frequently present here and is adapted with some gusto in this 2001 fantasy adventure.

However where this film offers spills and thrills consistently there is so much missing from the book. More imagination and excitement appears on the pages where we see more characters are introduced. Therefore it is worth reading before viewing, s with all the instalments.

John Williams' score fits the scene perfectly whereas Chris Columbus' direction is good, you can't but feel the elements of magic could have been justified to generate a bit more surprise. Nevertheless the Quidditch match is some of the finest sporting direction you will ever see in the franchise.

This first part is a humorous and enthralling family adventure that does enough good justice to the book and with some good performances is a fine reminder of where the young stars started and where the franchise really begun.

The bookloving Norman
5つ星のうち3.0 The long way to magical maturity
2009年8月14日に英国でレビュー済み
Amazonで購入
If you watch The Philosopher's stone now, you are bound to know about Harry Potter. This film, even more than the others, shows how difficult it is to make a movie out of a much beloved novel, trying to attract both fans and neophites. It is definitely more for children than the books are, the dark side of Harry's Muggle childhood is not there, and little Daniel Radcliffe glides across the screen with an expression of permanent wonder. On the other hand, due to the novel being shorter than the others, there will be fewer episodes that readers will miss, but the characters (especially Hermione) are simpler than on the page. All in all, a nice way to spend an afternoon inside.
続きを読む
5人のお客様がこれが役に立ったと考えています
違反を報告
レビュー を日本語に翻訳する

While Philosopher's Stone is one of the weaker films of the overall series, this is still an impressive film to start it off. True the special effects look really dated compared to the later films, but the story is great and the the cast is fantastic.
続きを読む
違反を報告
レビュー を日本語に翻訳する

Jay Dunlop
5つ星のうち4.0 Cracking film, very innovative storyline and super effects!
2002年6月12日に英国でレビュー済み
Amazonで購入
Let's get the good out of the way first. The film is super. Kids love it, adults love it and even my dog likes it! I'd seen the film numerous times, and having it in my own living room is great.
But, and it's a big but, the second disc is a waste of space! The naff narration is geared at age 4yrs only. The pronunciation of names and places is far removed from those used in the film, so younger children will get confused, whilst the tour of Hogwarts is just plain bad!
So yes, get the set for the film, but there is little to learn from the second disc. You could always use it as a drinks coaster I suppose.
続きを読む
違反を報告
レビュー を日本語に翻訳する

Morebrightness
5つ星のうち5.0 First Harry Potter film !
2013年9月10日に英国でレビュー済み
Amazonで購入
Good that the films are always true to the books, as it was J K Rowling who drew me into reading again, after years of never picking up a book. The story gives Harry his introduction into being a wizard, of which he was not aware, and the shock of being guarded and understood, by the huge Hagrid. Great characters, who grow up through the films, and gradually have more understanding of ' he-who-must-not-be-named'.
続きを読む
違反を報告
レビュー を日本語に翻訳する
すべてのレビューを参照します
トップへ戻る
Amazonについて
Amazonでビジネス
Amazonでのお支払い
ヘルプ＆ガイド
日本語ショッピングのための言語を選択します。 日本ショッピングのための国/地域を選択します。
© 1996-2020, Amazon.com, Inc. or its affiliates