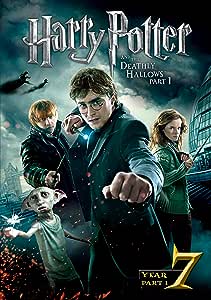 Michael Finn
5つ星のうち5.0 Darkly atmospheric
2011年4月12日に英国でレビュー済み
Amazonで購入
This one hits the mark in all the right ways. It just doesn't seem rushed at all, and for that we have to applaud the decision to split the final book in two. Finally we get a Harry Potter film which isn't desperately trying to cram too much plot into too short a span. The cinematography is superb throughout and there is time to sit back and soak up the atmosphere. I got a real sense of the enormity of the the task Harry and friends were trying to accomplish. Sure there are some great action sequences but I thought it excelled at creating menace out of the darkness and melancholy out of the isolated British countryside. It seemed like the films had matured in the same way the books did. Gone are the protective walls of Hogwarts and the comforting presence of Dumbledore and Hagrid, the parties, Quidditch matches, classrooms and dorms. Even Christmas has grown up - no longer the exuberance of presents, snow fights and trips to Hogsmeade but rather the more reflective and sombre occasion it sometimes becomes as we grow older, here shown at the graveyard at Godric's Hollow. Previously my favourite scene from the movies had been Harry meeting Buckbeak for the first time in Prisoner of Azkaban but there are a wealth of great scenes in this one too, some quite unexpected like Harry and Hermione dancing in the tent, the ethereal Patronus doe in the dark of the forest, Hermione remembering her childhood in the icy Forest of Dean and the pell mell chase through the trees pursued by the Snatchers. Most importantly though the friendship and bond shared by Harry, Ron and Hermione really comes across strongly, which is what should always be at the heart of all of the Harry Potter books and films. I'm certainly looking forward to seeing the final two halves together when the last film is finally in our hands - it's going to be amazing.
続きを読む
1人のお客様がこれが役に立ったと考えています
違反を報告
レビュー を日本語に翻訳する

MrE
5つ星のうち4.0 Fantastic book that didn't quite make perfection in the film!!
2011年4月14日に英国でレビュー済み
Amazonで購入
First off i'm a huge Harry Potter fan. I have read all the books and its always been interesting seeing how the books have translated into film, needless to say they always either miss out parts or cut them down to almost non existent scenes, like the Wedding scene which is really squeezed in! I won't spoil it for those that haven't seen it yet but all i'll say is you won't be disappointed!

So why only 4 stars you may ask? well, unfortunately large parts of the film focus on rather boring parts of the book, following Potter, Weasley and Granger through the woods, around London and various other places just talking and trying to avoid death, although the book was really good, in the film because its no longer based at Hogwarts the magic seems to have warn off! The scenery isn't up to scratch, (just walking around London isn't good enough for a potter film) now i know i'm probably going to get slated for saying that and knocking it down a star but where as you watched all previous films with anticipation and excitement you watch this trying to egg the film into a bit of action, it doesn't have those high octane magic moments of previous films i guess is what i'm trying to say. Its good but not the best. Now this review is only my opinion and if you haven't seen the film then i recommend you do so. If your a HP fan then you like it BUT it won't blow you socks off like previous ones!!

VERDICT: Its a solid Potter film but it's definitely lost some magic somewhere.

RECOMMEND TO ALL POTTER FANS!!

p.s. a note on delivery, i ordered this on Wednesday and selected first class (which is extra) and the item didn't come until Tuesday the following week!!! (first class is suppose to be with you within 2 days)... Not Amazons fault i know as they dispatched the item on time and within 24 hours, it's royal mail being lazy as usual! my advice is don't bother with first class post just use the standard Free delivery as it doesn't seem to make much of a difference!!
続きを読む
2人のお客様がこれが役に立ったと考えています
違反を報告
レビュー を日本語に翻訳する

mummy spoon
5つ星のうち5.0 Back on form !
2011年4月16日に英国でレビュー済み
Amazonで購入
I was very skeptical before I saw this film about whether it could find it's feet and satisfy the many Harry Potter fans who have waited so long to see this epic story brought to a close.
Not since 'prisoner of Azkaban' have I really felt justice had been done to the books, and though lots of reviews say 'stop going on about the book' ,it is important to many of the fans, J.K Rowling wrote such a fantastic series of books, it would be such a shame if we didn't.
All that said, this, the seventh film ,has restored my faith and has finally brought some balance back to the series and can stand beside the first three with it's head held high.
The tone of the film is felt immediately, no more Hogwarts, no more children, they are all grown up and ready to fight the dangerous battle which awaits.It is a nicely rounded film with some humour, some tears, plenty of action and lots of old faces we haven't seen for a while. I was particularly pleased to see Dobby and they managed that part of the book perfectly.
The ending of this first part felt just right, plenty in this film and plenty to look forward too in the second part, I wasn't sure they would be able to break it up in to two solid films but again I was pleasantly surprised.
Daniel Radcliffe and Emma Watson carry most of the film and do an excellent job of it but there are some fantastic performances from Rupert Grint and Helena Bonham-carter and of course Ralph Fiennes who got Voldermort to a T.
I can't wait to see part two now, I hope they make sure the last one is the best and go out on a high.
続きを読む
違反を報告
レビュー を日本語に翻訳する

Spike Owen
5つ星のうち3.0 The seventh installment, the appetiser.
2011年7月18日に英国でレビュー済み
Amazonで購入
As the ultimate wizarding battle between good and evil draws ever closer, Harry, Hermione and Ron bunk off from Hogwarts to go search for the "Horcruxes" with which to halt the ever stronger Voldermort and his army, on the way they learn the importance of the Deathly Hallows artifacts.

So this is the one that see the comfort confines of Hogwarts left behind as our intrepid trio of best pals hit the mountains and forests in search of the tools to stop old snake face in his tracks. In what is ultimately a chase/escape movie, one where the characters have to fight not only a number of challenges that come their way, but also their new found in-fighting capabilities, Deathly Hallows 1 wonderfully dangles the carrot for the final series entry to come. But the overriding thoughts you come away with from it is that firstly it's not really that much fun, and secondly that it shouldn't have been a stand alone movie. Too much of it plods where exposition and padding strains to get the film through its near two and half hour running time. Without the hustle and bustle of Hogwarts, and the myriad of characters that reside within, film struggles to escape the over reliance on just three central characters and a ream of MacGuffins. While some of the comedy and tender moments falls flat because tone is firmly pitched at dark clouds a gathering. However, where it does reward is with the action sequences, with David Yates once again proving he's a considerable talent when it comes to directing such passages.

New additions to the cast list feature Rhys Ifans, Peter Mulan and Bill Nighy, all welcome, and all sadly underused. As is the return of some older characters from earlier series entries (do you remember John Hurt was in the first film?!). While the thread involving the Ministry of Magic, and its nasty transformation into a Nazi like call for non-magical folk ethnic cleansing, is supremely adult and hits the nerves it should do. Of the three principal young adult actors, it's still Emma Watson leading the way on ability, but alongside her, Radcliffe and Grint have earned our love and respect over the years for having to carry the weight of such expectation that has come with these roles. Fact is, is that now, having grown up with them and their characters for over ten years, we surely accept them as not being multi ranged child actors....

Tension is high and the magical moments engaged big time, but the draggy nature of the beast makes this a film purely working as an appetiser to something sure to be far bigger and better. 6/10
続きを読む
違反を報告
レビュー を日本語に翻訳する
すべてのレビューを参照します
Amazonプライム会員ならお急ぎ便、日時指定便が使い放題
さらに、映画もTV番組も見放題。200万曲が聴き放題 。クラウドに好きなだけ写真も保存可能。
> プライムを無料で試す