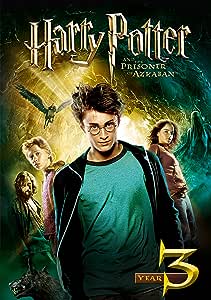 Jacques Amano
5つ星のうち5.0 Interesting to watch both in English and in Japanese (dubbed)
2020年3月16日に日本でレビュー済み
Amazonで購入
I wanted to show this DVD dubbed in Japanese, with an English subtitle, to my students, but due to covid-19 threat the class was cancelled. I wondered what my students' reactions would have been. In any case, it is a good language learning tool.
続きを読む
4人のお客様がこれが役に立ったと考えています
役に立った
コメント 違反を報告
レビュー を日本語に翻訳する

With all these DVDs, though, there is quite a bit missing in regards to the books as there is just not enough space in the dvd to cover the whole thing. So, right after you see the dvd, I would highly recommend that you get yourself an Audio-Book, and listen to Stephen Fry telling you the longer story of what happened in The Prisoner of Azkaban. (Fry communicates the different voices excellently.) That way, you have all the images from the dvd and you can run your imagination with all that in place. Like two exciting stories from one.

Mole
5つ星のうち5.0 Great family film
2012年10月7日に英国でレビュー済み
Amazonで購入
This is the third film in the series about the boy wizard and his friends at Hogwarts school. This film is a little darker than the previous two; it reflects the fact the children are now teenagers and starting to see the world in a different light. Harry is at risk from someone that he is told is dangerous; a man that was imprisoned at Azkaban prison many years before and was involved in the death of his parents.

I've not read the books so I can't say how well it interprets the books; however, I do feel that it tells the story very well indeed and the individual characters are given the chance to really shine. They are teenagers and they behave in the way that would be appropriate; the subplots of attraction are quite amusing to watch.

Although it does contain some darker material, it is is still suitable for most youngsters; they will pick up on the various themes quite quickly.

A. S. Garton
5つ星のうち5.0 Possibly the best yet?
2005年1月4日に英国でレビュー済み
Amazonで購入
Prisoner of Azkaban was one of my favourite books in the series so far. To date, Warner Bros. have made two excellent films in Philosopher's Stone and Chamber of Secrets - and most people I know think that the first film was, marginally, the better of the two. I think Azkaban is perhaps even better still.
First of all, the acting is better in this film. The main characters have always been well beyond their years as far as that goes, but some of the supporting cast needed to improve, if only slightly. The set is also better, and suits the plot well. It does take a bit of getting used to after two films, but by half-way through you'll wonder what all the fuss was about. This film, then, brings together a confident cast and a set that will allow for the plot growth required of forthcoming films.
The extras on this two-DVD set are as good as ever, although you should note that most of it is aimed at kids rather than teens/adults.
As usual, the DVD set is well presented and sits alongside the previous two films nicely - similar cover artwork and the same style of case.
I can't wait for the next one.

C. Wise
5つ星のうち5.0 Nice Set
2012年10月16日に英国でレビュー済み
Amazonで購入
Unlike the first two movies you don't feel cheated by not getting the extended edition on Blu-ray, as this doesn't have an extended edition. There are 4 discs: blu-ray movie, DVD movie and two discs of special features. The two cards you get are Sirius and Hermione, and of course the book with glossy pictures.
The movie is widely considered to be the best in the series (not mine, however), it's a good buy.