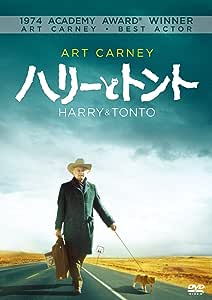 Roland Deschain
5つ星のうち5.0 Slow but thoughtful & moving
2018年12月2日にドイツでレビュー済み
Amazonで購入
First off you have to remember when this film was made and what it's subject matter is to know if this type of film is for you; secondly if it is for you then you know roughly what to expect from such a movie but even with that it still has a little gut punch for you just before it ends.

Art Carney gives a great understated performance as Harry an elderly man forced from his flat with his beloved cat Tonto when they are demolishing the building, his children don't really understand or want him and it sparks off a trip across America when a local airline refuses to allow him to keep Tonto with him on the plane.

To say too much would be to provide spoilerific information so I won't do that, but it does not spoil the film to say he meets and travels with an eclectic bunch of people impacting upon his life and Harry/Tonto doing the same to them.

It is slow moving, but it has real heart and soul and talks about the loneliness and desolation we visit upon others and ourselves when we forget to interact, it really is not about how we end but the journey we take to get there.

George
5つ星のうち5.0 Life is memories and life is living those memories
2015年7月27日にアメリカ合衆国でレビュー済み
Amazonで購入
Art Carney won a Best Actor Academy Award for his touching and very real performance of a lonely older man driving across country to visit his
children. His wife has passed away and he is now retired. With the companionship of his cat, Tonto, Harry encounters life on the open road and
experiences family togetherness and memories forgot are awakened. Real, moving and touching throughout. Carney, a highly skilled and
versatile actor, reached the pinnacle of his life as a performer. Carney is beautifully moving and as real as any of the millions of seniors that live
their final days in isolation, contemplation and lonliness..as well as memories -- both good and bad. A masterpiece, nicely understated. Larry
Hagman is highly effective as Carney's wayward son and Ellyn Burstyn is magnificent. Well-photographed on the roads of America as a real
portrait of Americana and the people that inhabit this realm of consciousness. We all learn from the portraits of life. This is one of the most
fluid of them. Not to be missed. A memory that will linger forever within your conscious being.

Marthacatgirl
5つ星のうち5.0 Great Movie That Will Break Your Heart!
2003年11月25日にアメリカ合衆国でレビュー済み
Amazonで購入
This movie came out in 1974, when I was 16 years old, but I don't recall ever hearing of it until I read about Art Carney's death a couple of weeks ago. I promptly ordered the video, watched the movie for the first time last night, and wow! it was so sad it ripped my heart out! It's a great movie, with an outstanding performance by Art Carney (yes, I do think he deserved the Oscar). The thing that most prompted me to get it was the fact that I love cats. If you love cats, I guarantee you'll love this movie, but I also guarantee you'll cry at the end. You'll also feel sorry for Carney's character, an old man who feels he's lost all his old friends and doesn't know his place in the world. He sets out with his cat Tonto trying to find roots, and along the way he meets some strange characters. That's one thing that makes the movie interesting. This movie also took me back to the 1970's and made me realize that life was actually simpler then, when we didn't have the Internet, cell phones, and computerized cars. Watching the movie will give you a feeling of nostalgia (if you can remember the 70's), as well as humor, sadness, and sympathy. A lot of emotions are wrapped up in this movie, and I couldn't believe how real it seemed to me.
続きを読む
18人のお客様がこれが役に立ったと考えています
役に立った
フィードバックを送信中...
フィードバックをお寄せいただきありがとうございます。
申し訳ありませんが、お客様の投票の記録に失敗しました。もう一度試してください。
違反を報告
レビュー を日本語に翻訳する
その他の国際レビューを読み込む

Daniel M. Hobbs
5つ星のうち5.0 Thanks for the DVD!!
2005年3月22日にアメリカ合衆国でレビュー済み
Amazonで購入
This is an update of a previous review pleading for a DVD release of this film. Thanks to 20th Century Fox for the release. Excellent transfer of an marvelous film.

Evicted (literally carried) from his New York apartment, Harry Coombes (Carney) and Tonto, his cat, undergo a series of encounters that move them slowly, inevitably west. Harry stays briefly with each of his three children, and reinforced by casting choices, we feel that we're moving backward in time, eldest to youngest. Harry, too, seems to move backward in time. Through a series of other encounters - an Indian healer, a young girl running away from home, and others - Harry sheds his past, piece by piece, and moves toward an open future in which anything might happen.

There are memorable character portraits by Ellen Burstyn, Larry Hagman, Arthur Hunnicutt, Chief Dan George, and others. And of course Harry, whose acceptance of loss and refusal to indulge in sentimentality or self-pity show us it is possible to age with dignity and suppleness. This is a gem of a movie, from a time when Hollywood was not afraid to tell real stories about real people.

Would someone, PLEASE, release this on DVD!? Forget the special features, forget the cast & crew bios, the filmographies, the frills and trills. Just remaster this and put a good, clean copy on DVD. It's too good a movie to lose to tape rot!
続きを読む
42人のお客様がこれが役に立ったと考えています
役に立った
フィードバックを送信中...
フィードバックをお寄せいただきありがとうございます。
申し訳ありませんが、お客様の投票の記録に失敗しました。もう一度試してください。
違反を報告
レビュー を日本語に翻訳する

L. G. Lewis
5つ星のうち5.0 Totally memorable, sweet movie
2003年11月12日にアメリカ合衆国でレビュー済み
Amazonで購入
Hearing the sad news that Art Carney passed away today, it immediately made me think of Harry and Tonto - even before any of his other excellent work. This is a movie (yes, it has comedic moments but is not a 'comedy') that provokes thought, evokes an era, and sticks with you even many years later. I urge anyone with a heart (and a few hankies) to see this. The reviewer who mentioned the R rating had it exactly right - a reasonable mature youngster sees and hears far more on television than what appears in this movie! Let's hope it appears on DVD before too long - I'm in line for a copy.
続きを読む
5人のお客様がこれが役に立ったと考えています
役に立った
フィードバックを送信中...
フィードバックをお寄せいただきありがとうございます。
申し訳ありませんが、お客様の投票の記録に失敗しました。もう一度試してください。
違反を報告
レビュー を日本語に翻訳する