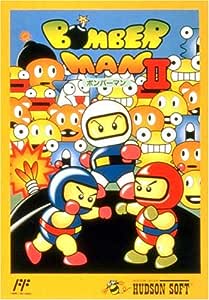 Jason
5つ星のうち5.0 Need ''Joy Card'' famicom controller to play 3 player
2015年3月21日にアメリカ合衆国でレビュー済み
Amazonで購入
Firstly, I should note that even the US version is 1 to 3 players. Not 4. In the US version you do need a four score to play three player. The Famicom, however, is different. Because the original Famicom's controllers were hardwired, the four score is pointless even if you have a AV version which uses the same controller plugs as we have in the US, because all the Japanese games are programed to run on the original. Both the original and the AV Famicom have a unique plug-in slot on the side (the Japanese version of the zapper uses that plug). In order to play 3 player on Bomberman 2 for the Famicom, you need a famicom controller that matches that plug. There are a few different styles out there, but the one I bought is the Joy Card by Hudson Soft (sound familiar?) which matches the original hardwired controllers in color and design.
Now that I've cleared that up, this game is lots of fun as a one, two, or three player game.
In one player, you wander around areas blowing up stuff to find the exit and kill the bad guys before they kill you. The bad guys get harder the further you get and some power-ups carry over when you die, but others don't. There is a continue code for each level.
In two player, you start in oposit corners and blast your way to power-ups and your opponent. You blast radius starts at two squares and you can lay two bombs at a time. Your blast radius and number of bombs can be upgraded. It's first to 5 wins and you have to win by 2.
Now for 3 player, the third player starts in the middle, each player's blast radius is now one square and can just lay one bomb at a time. In addition to the other power-ups, there's a new one in 3 player that randomly speeds you up, slows you down, or makes you drop bombs when you don't want to and wares off over time.
By the way, this is one of those games that is in English even in Japan.
続きを読む
1人のお客様がこれが役に立ったと考えています
役に立った
フィードバックを送信中...
フィードバックをお寄せいただきありがとうございます。
申し訳ありませんが、お客様の投票の記録に失敗しました。もう一度試してください。
違反を報告
レビュー を日本語に翻訳する

bomberman77
5つ星のうち2.0 i don't know
2014年4月29日にアメリカ合衆国でレビュー済み
Amazonで購入
it was sent back 3 weeks ago they say they never got it I beleave they did. it is a japaneese game and it won't play on American systems and they didn't say so even though they say they say they did. I still haven't gotten my refund for that game. I may have to take leagel steps. that's right if you want this rating changed then send my money back now eather by pay pal or me amex card I prefer pay pal just contact for instructions.
続きを読む
役に立った
フィードバックを送信中...
フィードバックをお寄せいただきありがとうございます。
申し訳ありませんが、お客様の投票の記録に失敗しました。もう一度試してください。
違反を報告
レビュー を日本語に翻訳する