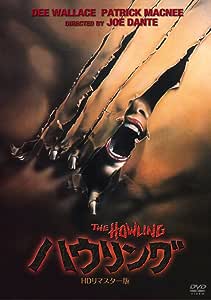 D J Jackson: Passionate about Film.
5つ星のうち3.0 AN AMERICAN WEREWOLF IN LOS ANGELES.
2019年10月11日に英国でレビュー済み
Amazonで購入
This is a review of the newly restored Region B2 Bluray from Studiocanal. It is so pristine, it looks and sounds like a new film.

This 1981 Comedy Horror film has a highly distinguished team behind it. Director Joe Dante was later to direct such hits as ‘Gremlins’ and ‘Small Soldiers’. The screenplay was by John Sayles, doyen of Indie films, with ‘Lone Star’, ‘Passion Fish’ and ‘Matewan’ amongst his superb works. The special effects were by Rob Bottin, whose later creations feature in ‘The Thing’, ‘The Fog’ , ‘RoboCop’ and ‘Total Recall’.

The film, one of three major 1981 Werewolf films, was based on a genuine horror book of the same name, by Gary Brandner. It follows an LA television news anchor woman, who has been investigating a brutal serial killer in the city. She then goes out of town to a rural retreat, following a terrifyingly close call with the killer. The book’s approach to events was totally re-moulded by Sayles in his screenplay, and what emerged was far more knowing and wry, and famously semi-humorous.

However, even nearly 40 years on, none of this prevents the film having some genuinely scary moments, and certainly some gruesome ones. It is also quite surprisingly sexually explicit. The special effects, made of course many years before CGI made it so easy, are variable, but the transformation scenes of humans to Werewolves, are very clever, and totally repellant! The location filming is excellent. Night-time LA has rarely seemed so sleazy or threatening, and the backwoods settings, highly evocative of ‘Little Red Riding Hood’, are superb.

There are several well-known faces amongst the cast. Patrick Macnee, the well-known British character actor, is nicely oily as the TV station’s tame psychiatrist, the distinguished American character actor (and Dante film regular) Kevin McCarthy, is reassuring as the TV station’s MD. Film actors John Carradine and Slim Pickens feature in colourful minor roles. Robert Picardo, who has gone on to major success on TV, made his film debut here as Eddie Quist, the killer. Much of the look of the film, especially the dress and hair styles, shows the film’s age, but the female roles are more pro-active and meaty (no pun intended!) than in many other films of the era.

Well-received at the time of its release, ‘The Howling’ remains an enjoyably entertaining film, perhaps best described as ‘Horror Lite’. It won’t stop you sleeping, but it will make you jump, and, probably, giggle.

Jon Bee
5つ星のうち4.0 Werewolves Galore!
2020年2月27日に英国でレビュー済み
Amazonで購入
This 1981 American spin on the werewolf legend followed on from the previous year's classic 'An American Werewolf In London'. That film became something of a cult fixture, and earned its reputation as one of the best films on the subject ever made. The Howling, in contrast, has perhaps gone more for quantity than quality, as be the end of this movie there are plenty of werewolves to be seen. It all began when writer Karen White(Dee Wallace)headed to a country retreat to recover from a nervous breakdown, but ended up in more of an emotional state then when she started! The psychiatrist on site, Dr Waggner(played by 'The Avengers' very own Patrick MacNee)is amongst those who howl at the full moon, and it isn't long before Karen is entwined in this eerie situation. Others in the cast include John Carradine, and there a quite a few edge-of-your-seats moments, but this doesn't really come close to the claustrophobic and tense atmosphere found on the moors and in the earlier American Werewolf effort. Perhaps there are just a few too many hairy creatures in this one - one very scary beast is a lot better than lots of them! However, any buff of werewolf films should certainly take a look at this one, even if it doesn't match John Landis' 1980 classic.
続きを読む
役に立った
フィードバックを送信中...
フィードバックをお寄せいただきありがとうございます。
申し訳ありませんが、お客様の投票の記録に失敗しました。もう一度試してください。
違反を報告
レビュー を日本語に翻訳する

Amazon Customer
5つ星のうち4.0 A Very Good Film.
2019年4月30日に英国でレビュー済み
Amazonで購入
I only give honest reviews on any film I watch. This one I was sceptical of. But as I watched it, it became very clear to me this film is far better than The Night Of The Wolf. The updated digital remastering is absolutely brilliant. A really damn good transfer. My copy was crystal clear in the picture quality. I could not fault it. Very well filmed and directed. This one looked more real than the night of the wolf. The special effects were given time to prepare properly. Really well worth a watch. There is a bit of nudity in it. My only down side, was Dee Wallace at the very end. Her werewolf make up could have been a lot better. Other than that, a very good watch. The suspension is gradually stepped up to its ultimate climax. I really enjoyed it. PC. 30. 04. 2019.
続きを読む
役に立った
フィードバックを送信中...
フィードバックをお寄せいただきありがとうございます。
申し訳ありませんが、お客様の投票の記録に失敗しました。もう一度試してください。
違反を報告
レビュー を日本語に翻訳する

Colonel Decker
5つ星のうち4.0 Still Has Enough Bite After All These Years
2013年4月8日に英国でレビュー済み
Amazonで購入
The Howling is a fun 80s movie. I didn't find the film at all scary, and it's almost without blood. The effects are still very good after 30 odd years.

The cast is good and stars Dee Wallace, Christoper Stone, Patrick Macnee and the timeless Dick Miller, who cites his very small cameo as the best part he's ever played in his film career.

Whilst The Howling is not as nearly as good as I remembered as a kid, the film is still very enjoyable. Sure there are a few moments that don't fit too well, but overall it's classic 80s horror. Also it's just refreshing to see a good werewolf movie. In all honesty I don't think I could name 10 good ones.

Point of note the woman werewolf was my first ever crush- she still looks hot looking back.

You'll have a good time with this movie and it's climax. Try and avoid the dreadful sequels though.

MARC. P
5つ星のうち4.0 The second greatest Werewolf movie
2018年2月22日に英国でレビュー済み
Amazonで購入
After An American Werewolf this movie tops the list of great werewolf movies. This is more of a horror than American werewolf and has some excellent effects that still hold up. Definitely worth a watch
続きを読む
2人のお客様がこれが役に立ったと考えています
役に立った
フィードバックを送信中...
フィードバックをお寄せいただきありがとうございます。
申し訳ありませんが、お客様の投票の記録に失敗しました。もう一度試してください。
違反を報告
レビュー を日本語に翻訳する
その他の国際レビューを読み込む

Amazon Customer
5つ星のうち5.0 Howl-howl-howl (during X-mas holidays)
2018年12月28日に英国でレビュー済み
Amazonで購入
I purchased this as a X-mas present to myself and watched / digested it visually during the holiday season.
So, theme of my X-mas 2018 was "werewolves". Nice!
I enjoyed this a lot. Visual side was very tempting, extras were pleasureable and story was addictive.
I didn't even realize that I'd be so interested about werewolves and myths around them.
This movie was a good gateway into their world.

Ms. L. J. Braisby
5つ星のうち5.0 Thee Best Werewolf Movie To Date!
2011年5月7日に英国でレビュー済み
Amazonで購入
Karen is a news reporter who is being stalked, if you will, by a mysterious man who names himself Eddie. They agree to meet and Karen decides to make it a story for the news team she works for, however the meeting goes terribly wrong. Eddie is much, much more than what she thought he was and their meet leads to him being shot by the Police, as he tried to attack Karen. Traumatized by what she saw in Eddie, and having terrible dreams about that fateful night, Karen and her husband Bill decide to go stay at a Woodland Retreat called The Colony, under her Doctors high recommendation. All is tranquil and quaint, and the neighbours seem welcoming and hospitable, until night falls, and strange, spine-chilling noises are heard, getting more intense as their time at The Colony goes on. Also, Bill starts acting withdrawn and volatile, could it be something to do with the local Hippy Chick who everybody seems to steer clear from?! What has got into this seemingly uncomplicated town? Are the Locals hiding something truly sinister under their simple way of life? You'll have to purchase and watch The Howling to uncover the bone-chilling truth!
After seeing more than my fair share of Werewolf Movies, new and old, I can safely say The Howling has impressed me the most! It was made in the early 80's, but that doesn't compromise on the absolutely amazing Werewolf effects (the close-up "change" scene is the best and scariest I've ever seen!) And the Werewolf howls are nothing short of terrifying. It has a great storyline which is creepy and believable. The Howling is an absolute classic!
I got the 2 disk Special Edition of this, which comes with Special Features such as a Documentary Feature, some Deleted Scenes and Outtakes, and a Trailer, as well as a few more extras. The picture and sound quality is stellar, however I didn't get a Cardboard Slip Case which I've seen the film in a few times, but that doesn't really matter! It would have been nice just to get one.
Overall, The Howling is a must for any Werewolf fans, and is definitely one of my new favourites! Beware This Moon...!

David Carey
5つ星のうち5.0 Good film, but get the American Shout! Edition
2019年11月9日に英国でレビュー済み
Amazonで購入
The UK Blu-ray release has some of the special features of the American but the UK release doesn't have any feature of director Joe Dante. Plus the American release has a documentary. If you have a region-free player, get the Shout! edition.
続きを読む
役に立った
フィードバックを送信中...
フィードバックをお寄せいただきありがとうございます。
申し訳ありませんが、お客様の投票の記録に失敗しました。もう一度試してください。
違反を報告
レビュー を日本語に翻訳する

S J Buck
5つ星のうち4.0 Probably 3.5 stars
2012年6月15日に英国でレビュー済み
Amazonで購入
Once you get over the early 80s stylings which have dated quite badly, this turns into a decent horror film. In fact it improves as the film progresses. Unfortunately it came out around the same time as An American Werewolf in London which is a much superior film, but don't let that put you off.

This has an interesting cast, including Patrick Macnee and John Carradine. The special effects by Rob Bottin are very good for the time, although they are overplayed a bit towards the end of the film, especially considering this is a short movie (under 90mins). Bottin would go on to do the effects for The Thing a year or so later.

There are occasional humourous moments, noteably near the end and whilst it certainly has plenty of flaws its quirky charms make it a worthwhile purchase at the right price (i.e. cheap).