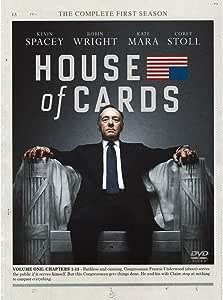 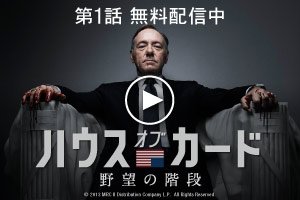 The Reader
5つ星のうち5.0 Please watch. You won't regret it.
2018年1月27日に英国でレビュー済み
Amazonで購入
The Master & Mistress manipulators of politics, careers & lives.
'Kévin Spacey plays Frank Underwood, a congressman who gets things done....at any cost, he fears no-one,
& you really dont want to cross him. He uses people as needed & consigns them to the bin. He is very nearly a sociopath. His only conscience is his wife Claire who is equally as ruthless. Brilliant version of this political, and wickedly clever drama.
This a 4-Disc Box-Set of the 13-episode complete first season

Mr. L. R. BUXTON
5つ星のうち5.0 Classic remake of a classic show
2014年12月30日に英国でレビュー済み
Amazonで購入
Whilst now dating back to the end of the Thatcher era "House of Cards" was one of the BBC's finest-ever political thrillers, bringing us the classic phrase 'You may very well think that. I couldn't possibly comment', and this show had a lot to live up to, both transposing the action to America and the modern age. However this excellent series keeps the standard, and the lead character's dark charisma and Shakespearean-style speeches to the audience of the original show, whilst not being in its shadow.

In this drama Kevin Spacey's seemingly loyal but devious and manipulative Chief Whip Frank Underwood is persuaded by his tough-minded wife, Claire, to not just meekly accept being passed over for promotion by the President, and make plans of his own. This sets in motion a series of events - shocking, brutal and ruthless - as he plots to rise up the ladder, treading on both good and bad people as he does so.

In some ways it's typical of a David Fincher-directed show: dark, subdued lighting; eerie piano-led incidental music; a feeling of almost elegant dread pervading the atmosphere throughout. And the show will not appeal to those who like either more light-hearted, less cynical fare, or that Spacey's character is arguably even more of a b*stard than Richardson's Francis Urquhart, who often had a bit of a twinkle in his eye.

Yet once you get used to the lead character surprisingly being in the Democrat party rather than the Republicans (Richardson's character was in the Conservative party, which suited his hard-line tendencies) and if you show patience this is a beautifully-constructed show with great performances, fine acting and a number of different clashes - particularly the ongoing tug of war between Frank and the President's friend, the sly billionaire businessman Raymond Tusk (brilliantly played by Gerald McRaney) for influence over the leader of the free world - will lead you nicely into season 2.

A. Whitehead
5つ星のうち4.0 Well-written but a little padded
2014年3月23日に英国でレビュー済み
Amazonで購入
Francis Underwood is an ambitious American politician. When a promised cabinet position is given to someone else, Underwoord embarks upon a Machiavellian scheme to get revenge and place himself at the centre of American political power.

House of Cards started life as a trilogy of novels written by Michael Dobbs, a British politician and senior member of the Conservative Party. The books were adapted for the BBC with Ian Richardson playing the scheming Francis Urquhart, who rises from his party whip to a more senior position through a combination of political acumen, blackmail, engineering scandals and, as a matter of last resort, murder. Both the book and TV series examined politics, power, the media and corruption, with their dialogue forming catchphrases still used in modern British politics. The series is regarded as a classic, with Richardson's portrayal of the monstrous Urquhart being a masterclass in screen villainy.

Two and a half decades later, we have the American remake. The action is moved to Washington, D.C. and the story is modified to take into account a much greater running time (thirteen episodes per season compared to the British four), a much larger cast and changes in technology in the intervening years. In particular, the journalist subplot is now modified to take into account the growing influence of social media on modern politics, picking up on themes previously seen in the final season of The Wire (although, like that season, House of Cards struggles to say much beyond the obvious about the decline of print journalism). Obviously the politics are tweaked to match the American political system. Despite all of that the original story shines through, enough that if you are familiar with the original than the plot risks becoming predictable.

Fortunately, this problem is reduced by the sheer quality of the production. This is a glossy, expensive series with a cast of top-drawer American talent. Familiar faces Kevin Spacey and Robin Wright anchor the production through intense performances. Spacey hides steel and resolve behind a veneer of Southern courtesy and charm, an effective device which starts to wear a little thin by the end of the series. Underwood's machinations are impressive, but his utter contempt for those he considers inferior and whom he doesn't need is so obvious that it's questionable if he would have really gained the reputation he has in the series. One episode, in which Underwood is reunited with his old military college buddies, hints at a much lighter and more fun person that Underwood has had to suppress in furtherance of his career, but it's the only moment where character or emotional development takes place. The asides to camera from the original series are also retained, although they are a little bit more inexplicable in this new version: Richardson dominated the original series and was in the overwhelming majority of scenes, so it made more sense. Here the cast is more of an ensemble and just one of them breaking the fourth wall feels a little pointless . It also doesn't help that many of these asides are either random ("I detest children. There, I've said it!") or tell us the obvious, but Spacey sells even the tritest lines with conviction and menace.

Wright's performance as Claire is more impressive. Claire is a more complex figure, as ruthless as Underwood in some respects but also possessing (slightly) more of a conscience. She also has more regrets about how much pursuing her husband's career and developing her own (as the head of a charity) has forced her to sacrifice her personal desires. If Underwood has no real character growth in the series, Claire makes up for it, especially when their objectives clash.

The rest of the cast is effective, with Corey Stoll charismatically playing congressman Peter Russo, a man of conviction and integrity whose life is undermined by substance abuse and conscience-shattering political compromises. Russo's character arc is somewhat mechanical and predictable (especially if you've seen the original series) but the actor manages to sell even the more eyebrow-raising character turns. Kata Mara is also effective in her role as journalist Zoe Barnes. Whilst Barnes's character arc is reasonably well-done (believing herself to be in a role of mutual manipulation with Underwood, which turns into a realisation she may have been cynically used to help his planned ascent to power), her choices and decisions make her a less than likable figure, which is a refreshing choice for what is presented as the leading female protagonist of the series.

The show is mostly well-written, though not as well-written as it thinks it is. There is a thin line between profundity and pretension and the show makes a habit of stumbling into the latter whilst searching for the former. The writing aims to make the dialogue snappy, intelligent and witty and succeeds more than it does not, but when it fails the dialogue can become leaden, over-expositionary and redundant. Some of these issues are artifacts of the massively expanded running time: by the end of the first season of thirteen episodes, the story has not even reached the end of the first British season of just four. There's a huge amount of filler in the middle episodes, some of it well-handled but a lot of it just feels pointless (the 'Peachoid' incident most notably). It might be wished that the show had more ambitiously adapted the entire original British series (twelve episodes in total) and had left it at that. Structurally, this expansion to (at least) thirty-nine episodes feels like the show is bloating itself out too much in the name of commercial success.

Still, as often as the show stumbles and as padded as it is, the first season of House of Cards (****) is still a success, driven forward by splendid performances and a coldly cynical assessment of how American politics work.

miss kitty
5つ星のうち5.0 LONG MAY FRANK UNDERWOOD REGIN OVER OUR TV SCREEN'S
2014年5月16日に英国でレビュー済み
Amazonで購入
After months and months of non stop talk about this hit show and of course it collecting every tv award nomination going i decided to give this ago now i'll admit i wasnt sold on the trailer right away but that all changed i think the show is a grower it didnt just have me from the start but a few eipsodes in i was hooked twists and turns every eidsode just got better and more intense. The acting here is top notch.Kevin Spacey and Robin wright are the suberb match for the story and the lovely Kate Mara.is a match for this perfect triangle. I think this show really makes you think about how far someone with go with their game to get total power and who they use, using dark tricks of the trade to get there even it means destorying that person's life and reputation. I cannot wait for my next fix of this roll on season 2 and many more i hope,
続きを読む
違反を報告
レビュー を日本語に翻訳する

Elleppi
5つ星のうち4.0 Great Spacey, great Fincher, great Robin Wright, but not the greatest tv series about power and politics
2015年8月11日に英国でレビュー済み
Amazonで購入
I give it almost five stars but not five because I think Borgen and The Wire are more original, intelligent, complex and politicsl than this. But this is the top of glamour, entertainment and politics if you watch tv, it's shakespearian, sometimes in an easy way. (Thanks to Kevin Spacey and his fantastic wife) even though the original series (yes, it's a remake of a nineties bbc series, much simpler and poorer visually) was very audacious and smart script-wise. It's an american moral tale, very puritan in a way but at the same time very thought provoking, if you consider the audience it is addressed to. Visually great. Fincher made a sort of 12 episode film that has nothing less than his real films.
続きを読む
1人のお客様がこれが役に立ったと考えています
違反を報告
レビュー を日本語に翻訳する
すべてのレビューを参照します
同様の商品をご覧になりませんか？ こちらのリンクで参照ください。ハウス オブ カード
Amazonプライム会員ならお急ぎ便、日時指定便が使い放題
さらに、映画もTV番組も見放題。200万曲が聴き放題 。クラウドに好きなだけ写真も保存可能。
> プライムを無料で試す