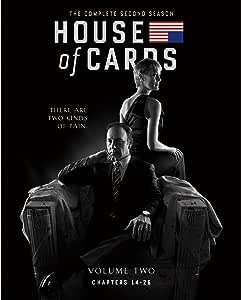 Mr. D. L. Rees
5つ星のうち5.0 GRIPPING DUPLICITY, F.U.-STYLE
2015年1月12日に英国でレビュー済み
Amazonで購入
Frank Underwood continues his ruthless machinations - the goal, America's greatest prize. Resembling a union of Richard III and Lady Macbeth, he and wife Claire show no mercy to any who stand in their way. Sometimes they miscalculate, in danger themselves of coming to grief. Policy then? "When you are fresh meat, kill and throw them something fresher."

13 episodes are crammed with intrigue, full concentration needed to keep track of sometimes complicated manoeuvrings. Throughout American politics seems dependent on devious goings-on behind an affable facade. (F.U.'s philosophy - "Shake with your right hand, hold a rock in your left.")

Interesting bonuses, it good to see credit given to the British original. Used splendidly in both versions are the asides to camera, we taken into Frank's confidence - so much conveyed with even a glance or a glare.

Format of the box set itself disappoints, several probably finding it not particularly user-friendly, innovative "style" favoured over practicality.

This in no way detracts from the 5 stars deserved.

As Vice-President, Frank can be either a doormat or a matador. No prizes for guessing which he chooses, he making it clear to us from the start, "Democracy is so overrated."

rbmusicman/and/movie-fan'
5つ星のうち5.0 'NOT A GREAT IDEA TO MESS WITH THE 'UNDERWOOD'S' - TO DO SO COULD PROVE FATAL'
2014年7月21日に英国でレビュー済み
Amazonで購入
The continuing tale of Political -Power - Games.
'Frank Underwood' has manoeuvred his way to the office of 'U.S. Vice President.
Business Man 'Raymond Tusk' who has the ear of friend and President, 'Garrett
Walker' has recommended the appointment.
'Frank' sets out from the word go to drive a wedge between 'Tusk' and the President,
but will his efforts to do so come back and bite him at a later date.
Making an enemy of 'Frank' or becoming a threat could prove fatal as political colleague
alcoholic 'Peter Russo' didn't live long enough to understand.
Both 'Clair' and 'Francis' are not beyond having affairs, facts that could cause both issues,
for both 'Underwood's'
Manipulation and wheeler-dealing is a way of life for 'Frank' -wife 'Clair' has an equally
single minded approach with her business affairs.
Neither are high in the loyalty-stakes they simply use people to achieve their aims,' Frank'
has a team of foot soldiers to do his bidding led by 'Doug Stamper'
'Frank' has been playing political games to undermine supposed friend and President.
While political games are being played, 'Zoe Barnes' a former lover that 'Frank' has used
because of her connections to the 'Press' becomes another victim of the Vice presidents
fury, her boyfriend 'Lucas' also with the 'Press' believes 'Frank' is involved with two deaths,
are his investigations getting too Hot for Frank ?
There is so much going on can 'Frank' and 'Clair' stay ahead of the game, cosying up to
'Garrett' and wife 'Tricia' all a part of the overall plan.
Meanwhile 'Raymond Tusk' is doing all he can to get even with the manipulating Vice
President, a plan which includes publically exposing 'Clair's' indiscretions and laying
the seeds of doubt about 'Frank' in the Presidents mind.
Is the plan coming off the tracks for the 'Underwood's' or will they prevail ?
One thing is certain 'Frank' and 'Clair' do.....deserve each other.
This is a terrific political drama which is certainly compelling viewing.
Just hope the series continues.....'Kevin Spacey' is wickedly convincing as 'Francis
Underwood' ........This a must see TV series.
続きを読む
3人のお客様がこれが役に立ったと考えています
違反を報告
レビュー を日本語に翻訳する

S.M. Johnson
5つ星のうち5.0 Here we are again
2014年9月8日に英国でレビュー済み
Amazonで購入
No it isn't more of the same. It has gone up several gears. Some stories from the first season continue, develop and are then knocked on the head, and many more stories are introduced. They are bigger stories, more dramatic. It is war on all fronts: but there is very little violence, it is all done with words. Kevin Spacey is a master of word acting, as is Robin Wright as his wife. Here is a snippet 'What are you going to do?' 'Tell the truth....selectively.' There is a lesbian sex scene and a tease into a three way sex session. A Civil War re-enactment group takes us away from indoor Washington into the wooded countryside. The colours are still sophisticated and mellow. Robin Wright appears to be poured into her dresses - but then she is very elegant and beautiful, and Apple computers are still in evidence. However, whoever redesigned the packaging is an absolute disaster. It is extremely difficult to get the discs out of the cardboard cases. Could we have series 3 in the normal holders please?
続きを読む
1人のお客様がこれが役に立ったと考えています
違反を報告
レビュー を日本語に翻訳する

Bronty
5つ星のうち5.0 Addictive and highly engaging
2014年8月14日に英国でレビュー済み
Amazonで購入
A great fan of this series. The first season was brilliant and this follow up series has been produced to the same intriguing high standards. For those of you, who like me, are a fan of the original British version with Ian Richardson - I can assure that this series is different in its own right and has been brought up to date via White House politics. Because of this it is sufficiently similar to honour the title of the piece - but significantly different to remove possibility of constant comparison. Kevin Spacey is fabulous in the lead role, as is Robin Wright as his extremely astute wife.
続きを読む
違反を報告
レビュー を日本語に翻訳する

D J F
5つ星のうち4.0 Excellent value at £13
2014年9月30日に英国でレビュー済み
Amazonで購入
Anxious to continue the story after Season 1, this well written series deals with the corrupting nature of power and ambition with no morals. Excellent value at £13, the acting particularly from Spacey is excellent. However, docked a star for quite simply the worst DVD packaging it has been my mis-pleasure to encounter - ever. Tacky cardboard that arrived with the spline crushed, two leaves of the fold out casing stuck together with the thin plastic overlay peeling from two corners, glue not holding the packaging together... I could go on. Fantastic quality series, simply appalling quality packaging.
続きを読む
違反を報告
レビュー を日本語に翻訳する
すべてのレビューを参照します
同様の商品をご覧になりませんか？ こちらのリンクで参照ください。ハウス オブ カード
Amazonプライム会員ならお急ぎ便、日時指定便が使い放題
さらに、映画もTV番組も見放題。200万曲が聴き放題 。クラウドに好きなだけ写真も保存可能。
> プライムを無料で試す