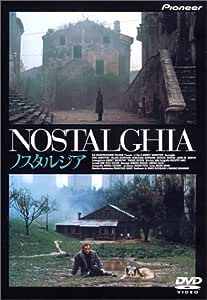 Boydon Boydon
5つ星のうち5.0 The True Blu Experience
2014年7月6日に英国でレビュー済み
Amazonで購入
Tarkovsky on blu-ray is becoming quite comprehensive with only Stalker (as far as I can discover) yet to début. Trouble is, with the exception of The Sacrifice (region-free) and Solaris, the rest are either only obtainable from overseas sources or are not Region B friendly.

Nostalghia is no exception: this Kino release is region A only. But if you do have a multi-region blu-ray player, I think this disc is well worth buying.

It is superior in quality to Kino's other recent release, The Sacrifice, which suffers from too much DNR and "sharpness" tweaking, giving it a very unnatural sheen, whereas, Nostalghia suffers no such digital "enhancement" defects. However, there would also appear to be no restoration work (perhaps in response to criticisms of The Sacrifice). Negative speckles are present (showing as white dots), and the soundtrack hasn't been cleaned up much - I could detect at least one reel change on the soundtrack alone. But to be positive, I think these slight imperfections contribute to the very filmic feel and quality that this blu-ray has.

And the transfer is otherwise excellent. If, as I am, you are used to seeing Nostalghia via Artificial Eye's DVD, you will immediately notice that colour saturation has a much more natural look: trees, smoke, flesh tones, blood, all appear as they should. The dream/memory sequences are now in black-and-white, not in sepia. The correct aspect ratio, 1.66, is now used, giving a little more picture area. But the greatest gain is in overall clarity and detail. Nostalghia abounds in natural textures: ancient stone, flowing and falling water, decaying buildings, and when human beings are set against such backgrounds the effect is almost 3D in quality.

Nicholas Casley
5つ星のうち4.0 "I'm tired of seeing these sickeningly beautiful sights"
2008年4月21日に英国でレビュー済み
Amazonで購入
Thus pronounces the Russian poet Pavel Sasnovsky (played by Oleg Yankovsky - also seen in "Mirror") to his Italian interpreter, the beautiful Eugenia (Domiziana Giordano) at the start of the film as she tries to persuade her charge to view a painting in a seemingly-deserted and misty Italian landscape.

"Nostalgia" is Tarkovsky sixth and penultimate movie. This was his first movie outside the Soviet Union and was co-written with Tonino Guerra, who wrote many screenplays with Antoniono.

The `plot' can be quickly told in outline, but not in detail. Pavel Sasnovsky is in Bagno Vignoni near Bologna to research the biography of an eighteenth-century Russian composer, Andrei Gorchakov. During his visit he ponders on issues and landscapes, including those within. He encounters the lonely and mentally-troubled Domenico (played by the Swedish actor and Bergman favourite Erland Josephson - also seen in Tarkovsky's final work, "The Sacrifice"). Towards the end, the scene switches to Rome, where Domenico publicly proclaims his ideas, whilst Sasnovsky fulfils Domenico's vow back at Bagno Vignoni. We end in a Tarkovsky set-piece scene, marvellously encapsulating both Italian and Russian landscapes in one frame.

One obvious response to this film is to argue that actually Andrei Gorchakov is Andre Tarkovsky. Be this as it may, the viewer will need to come to this film with as open a mind as possible; on first viewing matters both large and small can appear frustratingly obtuse, and so much is left unsaid. But all Tarkovsky films benefit from repeat viewing; a first sight requires you to give more than to receive, thereafter the balance moves sharply in the viewer's favour.

Many of Tarkovsky's stylistic hallmarks re-appear in "Nostalgia". Thus we have switches between the colour of the Italian present and the sepia of the rural Russia that Sasnovsky has left behind; the constant presence of water in many forms - mist, rain, puddles, snow; the long takes; the chiaroscuro; the camera focussing on only one of the participants in conversations; the beautifully-crafted visionary scenes, such as bird feathers falling like rain on a blinding array of candles; and the exquisite aphorisms such as Sasnovsky's "poetry is untranslatable, like all art", or his "feelings that are unspoken are unforgettable", or Domenico`s "1+1=1". Tarkovsky's films are not films but artistic and philosophical experiences.

The extras on this DVD are valuable. "Andrey Tarkovsky in Nostalgia", a film by Donatella Baglivo, takes us behind the scenes to show filming taking place at a number of locations. Tarkovsky remarks that part of the impetus behind "Nostalgia" is to show the impossibility of living side-by-side with others without becoming acquainted with and addressing the problems of this knowledge of one another: it is easy to get to know someone, but difficult to break off that relationship. There are short interviews with the actors and the production team. There are also some scenes that did not make the final edit.

"Tempo di Viaggio" is Tarkovsky's own documentary, wherein he is seen discussing script ideas with his Italian co-writer. Interweaving with these are scenes of their visiting Sorrento, Amalfi and Lecce, and Tarkovsky providing meditations on the director's mission.

In addition the extras include written details of interviews given by Tarkovsky about "Nostalgia". Here he describes nostalgia as an illness, "not simply a feeling of sadness ... it removes strength from the spirit ... for a Russian temperament it is a real illness ... one only contracts this disease abroad." As for the type of audience his films address, "For a poet it is enough to see a toe sticking out from under a dress in order to create an image of the entire world. My films turn to these people." The poetic image is of prime importance, for "When the images in a film need a lot of dialogue, when the dialogue has an important function, then I feel it is no longer cinema. It is something else."

Mr. & Mrs G. C. Stone
5つ星のうち5.0 Be Astonished
2008年8月21日に英国でレビュー済み
Amazonで購入
A glorious and utterly profound experience. Revel in the depth and multi-layered brilliance of the story and sentiment, and exploration of themes such as being human, religious and personal faith, home, and how we face our need for meaning and control in an unknowable universe. As in the earlier 'Mirror', understanding Tarkovsky stirs feelings and intellectual yearning at the deepest levels. I make no apology for making such bold statements - this is truly great art.
But forget that. Whether you follow the the detail and nuances or grapple with Tarkovsky's own intentions(and you will discover more every time you come back to this), ultimately it doesn't matter: there are scenes and images throughout this experience that just simply astonish. Not in a grand, big-screen way, but by striking you in the recesses of your mind - like great painting or music. And it holds you to the end. The final image - how it unfolds, what you hear, is one of the most moving and remarkable constructions in all art; following everything that has gone before, it struck me dumb when I first saw it on the film's release, has stayed with me since (haunted me in fact as any truly great image does) - and going back to it on DVD it has lost none of its power. Quite the opposite in fact - the older you get, the more hooks Tarkovsky has into your psyche.
続きを読む
3人のお客様がこれが役に立ったと考えています
役に立った
フィードバックを送信中...
フィードバックをお寄せいただきありがとうございます。
申し訳ありませんが、お客様の投票の記録に失敗しました。もう一度試してください。
違反を報告
レビュー を日本語に翻訳する

Reader
5つ星のうち2.0 an alternative view
2014年6月7日に英国でレビュー済み
Amazonで購入
Against the tide of opinion I found this a disappointing film, and my least favourite of Tarkovsky's works. The two lead characters are unengaging and the kind of depth and authentic dilemma found in other films by this director is replaced by mere pretentiousness and endless cliched rural villas with peeling walls. Still - this is a minority opinion - I seem to be the only person with a bad word for Nostalgia!
続きを読む
3人のお客様がこれが役に立ったと考えています
役に立った
フィードバックを送信中...
フィードバックをお寄せいただきありがとうございます。
申し訳ありませんが、お客様の投票の記録に失敗しました。もう一度試してください。
違反を報告
レビュー を日本語に翻訳する

x.StraightEdge.x
5つ星のうち5.0 Beauty and the Screen
2002年12月1日に英国でレビュー済み
Amazonで購入
I'm not an academic, nor a film buff so can't talk in the terms expected of this director's admirers.
It has a beautiful inner logic that conveys a sense of something understood - that sense that dappled things always secrete a sense of the universal. The troubadour (and troubled) poet/biographer researching a biography of a supposedly obscure composer unearths far stringer resonances from his childhood.These ripple outwards until they become the film itself.
The attraction of this film is simply that you could poster-print so many of the stills.
It simply is the best looking film I have seen.
続きを読む
4人のお客様がこれが役に立ったと考えています
役に立った
フィードバックを送信中...
フィードバックをお寄せいただきありがとうございます。
申し訳ありませんが、お客様の投票の記録に失敗しました。もう一度試してください。
違反を報告
レビュー を日本語に翻訳する
すべてのレビューを参照します
Amazonプライム会員ならお急ぎ便、日時指定便が使い放題
さらに、映画もTV番組も見放題。200万曲が聴き放題 。クラウドに好きなだけ写真も保存可能。
> プライムを無料で試す