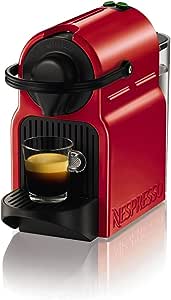 The American
5つ星のうち3.0 Appears functional but beware which seller you buy from
2019年10月27日に日本でレビュー済み
色: ホワイトAmazonで購入
This item was purchased from 柿崎商店 in October of 2019. It arrived in an Amazon shipping box, packaged with Hokkaido newspaper instead of the regular cushioning material. The product box looked worn, and had a hole in it. Inside the box, the Nespresso machine itself appeared to be new, however the coffee capsules (noted in the Amazon product page as coming with the machine) were missing. Instead, inside the box was a paper notice informing us that we should call a phone number to request the capsules. We did, and the Nespresso representative apologized and ordered replacements for the next day.

Upon further inspection, we noticed the product box was covered in various stickers. Some of them were obvious, like the "Thank You!" stickers covering the UPC bar codes, presumably to prevent them from being scanned. The other stickers were less obvious, as they were black and matched the exterior color of the box almost perfectly. When peeled back, it was revealed that they covered the printing that indicated free capsules were included in the box. Another black sticker was covering the manufacture date of September 30, 2017. So, this product is two-year-old stock being sold as new. We concluded that the capsules were removed previously, probably to be sold separately. Or perhaps, given the other very large and professionally printed "order your capsules separately" sticker on the outside, that these were some kind of demo or promotional units.

Overall this seems to be a functioning Nespresso product. However, we won't know until the missing capsules arrive. The experience as a new owner left much to be desired and was not in line with the Nespresso brand – even given this low price. As purchased from 柿崎商店, this would definitely not be suitable as a gift.
続きを読む
5人のお客様がこれが役に立ったと考えています
役に立った
コメント 違反を報告
レビュー を日本語に翻訳する