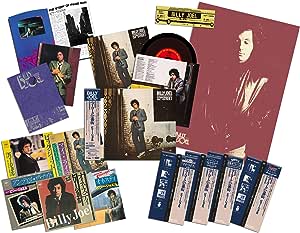 Amazon カスタマー
5つ星のうち5.0 Billy Joel’s 52nd Street “Hybrd 5.1 Channel
2018年10月24日に日本でレビュー済み
形式: CDAmazonで購入
Just received Billy Joel 52nd Street 5.1 SACD. This set is truly “Top Notch”! This is best recording of 52nd Street I have ever heard. What a CD. I highly recommend this Billy Joel CD set to all who truly appreciate Outstanding Music. Amazon thank you for Outstanding Service and Shipment. A must have for any Billy Joel fan and music 🎼 collector.
続きを読む
5人のお客様がこれが役に立ったと考えています
役に立った
コメント 違反を報告
レビュー を日本語に翻訳する

The Accidental Reviewer
5つ星のうち4.0 An improved classic, although shame it's not a multichannel release
2012年11月2日に英国でレビュー済み
形式: CDAmazonで購入
This is a review of the SACD version of this disc.

I bought this after realising that several older Billy Joel albums had seen re-released on SACD and I've liked his music for years. It should be noted that this a hybrid stereo CD/SACD version not the multi-channel disc. It's unfortunate that they have decided not to re-release that version as it's expensive to buy now.

Initially I was disappointed, the sound quality of this disc seems very limited in the treble response. The vocals are very warm and close sounding, although I would think it represents very well what was recorded at the time. The opening track 'Big Shot' does lack the wow factor that I was expecting. That said it's been years since I listened to the original CD, it makes me want to go back and listen to that disc to compare.

On later tracks I was really starting to get absorbed by the music, in particular by the time I had got to 'Half a Mile away' I was really starting to appreciate the music. Then I came to a real revelation, 'Until the Night'. I must have heard this track at least a dozen times before from regular CD. This time it gave me goosebumps, the sense of immersion was absolute, the fact that this wasn't a 5.1 disc didn't matter. I was listening to this disc on headphones and it felt like the music was coming from all sides, just amazing.

I now want to go back and listen again, and I have ordered more SACD discs both stereo and multi-channel. Time to rediscover some classics.

david white
5つ星のうち4.0 My first Billy Joel album on vinyl
2018年9月16日に英国でレビュー済み
Amazonで購入
Hard to believe i bought this on vinyl back in the late 1970's as in around late 1979 and still have it in my collection. Decided to go for the C.D. version and as ever my personal tracks are honesty,my life and the forgotten single until the night.
続きを読む
役に立った
フィードバックを送信中...
フィードバックをお寄せいただきありがとうございます。
申し訳ありませんが、お客様の投票の記録に失敗しました。もう一度試してください。
違反を報告
レビュー を日本語に翻訳する

Avid Reader
5つ星のうち5.0 An Old Favourite!
2009年12月19日に英国でレビュー済み
Amazonで購入
Having had this album in LP format years ago I decided to purchase it on a CD as I always loved it. Even after all these years it does not disappoint. In my opinion Billy Joel is an underrated composer and performer on this side of the Atlantic. He is extremely talented and this album is one of his greats. I'm a jazz fanatic and his love of this genre definitely comes through in some of these titles. My favourite is "Zanzibar" which I can never get out of my head when I've played it a couple of times - it stays for days. I also love "Rosalinda's Eyes", but seriously, every track is great and I recommend this CD.
続きを読む
7人のお客様がこれが役に立ったと考えています
役に立った
フィードバックを送信中...
フィードバックをお寄せいただきありがとうございます。
申し訳ありませんが、お客様の投票の記録に失敗しました。もう一度試してください。
違反を報告
レビュー を日本語に翻訳する

Monsieur le B
5つ星のうち5.0 Underrated
2012年2月15日に英国でレビュー済み
Amazonで購入
In my opinion, Billy Joel is probably the most underrated of 'mainstream' rock artists. He was at his peak between 1977 and 1986 although some of his later work contained some real gems. His music is original with some great lyrics and arrangements, which are never over the top.'52nd Street' is from his golden period and is one excellent piece of work with no weak tracks and three that really standout for me - 'Honesty', 'My Life' and the Spectoresque 'Until The Night'. Highly recommended.
続きを読む
役に立った
フィードバックを送信中...
フィードバックをお寄せいただきありがとうございます。
申し訳ありませんが、お客様の投票の記録に失敗しました。もう一度試してください。
違反を報告
レビュー を日本語に翻訳する

Mr. M. Lucas
5つ星のうち5.0 Billy Joels Finest
2014年3月6日に英国でレビュー済み
Amazonで購入
This album, along with The Stranger, were Joel at his very best.
I think between these two albums you'd have the majority of a Greatest Hits compilation.
Its testimony to his abilities that on his tour with eElton John he was seen to be the one with the most energy and charisma.