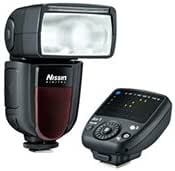 I bought two of these and the Nissin wireless commander around December 2015, with the intention of buying the Nissin wireless adapter that was to be released several months later, and would allow me to add my Sony brand flash to the wireless radio system set of Nissins.

I purchased one flash from Warehouse deals (perfect condition), while the other Flash and Commander were purchased new.

Pros:
+ Flash and Commander are well made, the build quality gave me confidence.
+ Battery compartment is a cartridge, so you can buy a spare and pre-load it with batteries for easy swapping in the field. Very practicle.
+ System is simple and fast to operate once you get the hang of pairing the commander
+ Reliable when used with good quality batteries (I use rechargeable Energizer / Lidl (yes Lidl), look for batteries over 2500mAh for the Flash, and the most powerful you can find for the commander)
+ The Flash units come with soft cases (no stand)
+ Flash fits securely to my A6000
+ Absolutely no problems with performance with only the odd weird exposure (rare, say 1 out of 30 shots or more).
+ Flash works in burst mode as well as my Sony
+ The displays on the Flash and Commander are unique and novel for a Flash system. Very modern and purposefully colorful.
+ Works with Sony's own flash guns, although this is using the optical method and not radio.

Small niggles:
- I found the pairing instructions hard to follow, this probably was my fault in some way as once I got the hang of it it was second nature.
- Commander comes with no soft case - maybe a little unfair to add this as a con, but seems strange not to supply a case when the Flash units have one.
- No stands for flash supplied - c'mon Nissin, this is a wireless system, where the flashes are likely to be off camera. A small plastic stand would cost pennies to include.
- Colour temperature can be erratic in my usage

Cons:
- Plastic flash mount - although strong and secure, at this mid range price I would expect a metal mount.
- Depending on who you ask, firmware updates need to be done by the dealer or the distributor or Nissin. I never found out which one... Nissin stated on their website that the commander would require a free firmware upgrade to work with the unreleased (at the time) Sony flash adapter. This not as yet released adapter was a deal maker for me. The free update turned out to be "Distributor says you need to speak to Nissin / Nissin says you need to speak to the distributor" and "pay postage both ways" update... Maybe we are spoiled by good service these days, maybe it was teething troubles with Nissin's new system, but I couldn't be bothered with this carry on and sold them while I could recoup my money.
- The commander on its own will not fire a Sony brand flash; you need another Nissin flash or the new Nissin adapter

To sum up:
If you exclusively plan to use this flash model with the commander as is, I recommend this system as reliable and fairly priced. When I purchased these flash, it was the only affordable radio wireless TTL system for Sony. Another cheaper brand, Godox, seem to have upped their game and I will be looking at their system in the future as firmware updates can be done by the user via USB.

I liked these guns and am sad to have had to sell them. Maybe the service is better now, but I would not buy again due to the return-to-base firmware updates for to the commander to be compatible with future Nissin releases. If Nissin fixed this and allowed user updates then I would be happy to look at them again.

-----
Jargon quickly explained from the opening paragraph:
High Speed Sync - Allows you to use extremely high shutter speeds with the flash
TTL - Is the system Sony uses to maintain correct exposure when using flash
Optical wireless system - Multiple flashes are triggered using infrared beams or light flashes. Needs to be line of sight for infrared.
Radio wireless system - Can be used out of line of sight.
続きを読む
3人のお客様がこれが役に立ったと考えています
違反を報告
レビュー を日本語に翻訳する

Steve
5つ星のうち5.0 Initial impressions are good
2020年3月11日に英国でレビュー済み
サイズ: Blitz inkl. Fernauslöserスタイル: Di700Amazonで購入
Only used it on one shoot and all seemed straight forward. I haven't used the radio transmitter yet as I need understand hoe to set up and operate.
続きを読む
違反を報告
レビュー を日本語に翻訳する

Bright Lanka
5つ星のうち5.0 Photo needy
2018年1月9日に英国でレビュー済み
サイズ: Blitz inkl. Fernauslöserスタイル: Di700Amazonで購入
This is a must for Sony cameras. I have a Sony flash too which I bought for my a77 but this radio control unit work perfect with my a600 and a99.
続きを読む
違反を報告
レビュー を日本語に翻訳する

Eoin Lundy
5つ星のうち5.0 Simple and easy to use. Fantastic value.
2019年6月10日に英国でレビュー済み
サイズ: Blitz inkl. Fernauslöserスタイル: Di700Amazonで購入
Love it. Setup is easy and works straight out the box. Easy to use, considering purchasing a second one to use with the commander.
続きを読む
違反を報告
レビュー を日本語に翻訳する