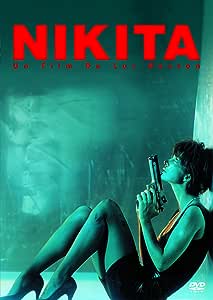 Leah Matthews
5つ星のうち4.0 Violent, stylish and brilliant
2016年7月12日に英国でレビュー済み
Amazonで購入
Nikita was the movie that put French film maker Luc Besson on the international map and spawned not only a US remake but at least two TV spin-offs; but as always though the original remains the best.

Anne Parillaud stars as a junkie sentenced to life imprisonment after killing a police officer only to be given a chance to redeem herself by carrying out missions (usually assassinations) for a mysterious government agency. After completing her training Parillaud is released into the city and meets a kind and quirky supermarket cashier (the always brilliant Jean-Hugues Anglade) with whom she forms a passionate relationship. Parillaud is forced to lead a double life: carrying out government hits while trying to lead a normal life with Anglade. Over time Anglade begins to suspect that Parillaud is keeping secrets, and things come to a bloody head when a hit goes very wrong.

If you can get over the absurdity of the central premise (why would the government train a junkie cop killer to become an assassin?), Nikita is a brilliant film; touching, harrowing and at times brutally violent. Parillaud is excellent for the most part, though some of her outbursts are rather bizarre, and there is terrific support not only from Anglade but also from Tcheky Karyo as Parillaud’s government handler who is secretly in love with her. Eric Serra provides a great sythentiser score, at times reminiscent of Brad Fiedel’s work on the Terminator films.

Nikita looks great on Blu Ray but the extras are a little underwhelming; most date from an early 2000s DVD release and are all in standard def. There is a 20-min ‘making of’ which includes interviews with all the actors (though not Besson), a short but interesting featurette on the music, a few brief and rather pointless montages that are supposed to illustrate various aspects of the film’s story, and the original trailer.

For me Nikita remains Besson’s second best movie (behind The Fifth Element) and it is still as fresh and powerful 25+ years since it was first released.
続きを読む
12人のお客様がこれが役に立ったと考えています
違反を報告
レビュー を日本語に翻訳する

Atomic Frog
5つ星のうち5.0 Hard Core French Femme Fatale Flick
2019年2月21日に英国でレビュー済み
Amazonで購入
Another Luc Besson classic alongside The Big Blue and Leon, Nikita is a karate chop to the solar plexus, adroitly administered by the gorgeous, the feisty Anne Parillaud. A madcap story that is best served by placing one's bonce in neutral, and going along with the roller coaster ride, as our tortured heroine survives ordeal after ordeal, only to come up against … Victor the Cleaner!

In a bit part Jean Reno, the muscular charisma effortlessly oozing at maximum madness, just about steals the film, as the implacable 'Victor the Cleaner’. A hitman who never gives up, who has no fear, who grunts away assault rifle ammo blasting his flesh, who dissolves his enemies in bathtubs full of H2SO4. Luc Besson later created the role of Leon for him based on his amazing performance here.

A brilliant film, cannot fault it at all, great music by Eric Senna, way better than the ghastly American remake, yeuch! The ending was changed to be more sensitive rather than the original brutal version where Nikita becomes a killing machine to get her revenge on those who trained her.
続きを読む
2人のお客様がこれが役に立ったと考えています
違反を報告
レビュー を日本語に翻訳する

J. McDonald
5つ星のうち5.0 Nikita.
2020年11月28日に英国でレビュー済み
Amazonで購入
Luc Besson`s stylish action movie from 1990; I remember it when it came out – the gun violence drew some media attention, though it doesn`t seem so extreme now.
The premise is that the lone survivor of a gun battle with police is sentenced to death, but instead is inducted into secret government agency to be trained as an assassin; Anne Parillaud carries the film very well in the leading role, ably supported by a fine cast which includes Jean Moreau and Jean Reno in smaller, but defining scenes.
One of Besson`s best films, it has more depth than it was originally given credit for and has spawned several remakes and a Canadian TV series – which are probably more familiar to general viewers than this original.
The UK DVD release has a few extras but the only one of importance is the 20 minute “making of “ featurette – the others are mere sound-bites lasting less than a minute with the exception of one on the music that is less than 5 minutes long.
It is – of course – a French film with English subtitles.
続きを読む
違反を報告
レビュー を日本語に翻訳する

M. Milbourne
5つ星のうち5.0 Absolute Classic
2019年5月3日に英国でレビュー済み
Amazonで購入
I bought this thinking I'd lost my original copy - then promptly found it. But I'd rather have a newer version anyway, as I'll be rewatching this classic for years to come. It's a shame Anne Parillaud didn't become a bigger international star after this, because she was certainly very watchable. I'm never sure about the ending though, because I always think it's a cop-out, but the rest of the film is great, with a few main-stays of French cinema thrown into the mix.
続きを読む
1人のお客様がこれが役に立ったと考えています
違反を報告
レビュー を日本語に翻訳する

Elleppi
5つ星のうち4.0 Besson's best film along with Leon, presented on an excellent blu ray
2015年9月9日に英国でレビュー済み
Amazonで購入
Along with Leon, is Besson's best film ever. Presented on an excellent blu ray, Nikita paved the way to the contemporary french (if not european) action cinema. It's a cold lit and cold-blooded story of a woman losing her nature to find redemption yet progressively and desperately trying to regain her dignity and feminine side before losing everything again. It is a detour plot, with some tragedy constantly hiding round the corner, but nonetheless it is also a very enjoyable, cool, entertaining and adrenalinic film. Anne Parillaud is a striking revelation as well as Besson's style, that skillfully manages to swing around a merely music video/commercial visual approach, giving density, drama and depth to the scenes (even action ones are not just merely action scenes), letting the actors and characters show their personality and inner drama, yet not renouncing to amuse and adopt any kind of visual, sound and editing solution to make it all look very cool.
At the end of the day, however, Nikita is a French film (in a good way), meaning it's focused on the dramatic progression of the story and the ambiguous fascination of its atmosphere
続きを読む
4人のお客様がこれが役に立ったと考えています
違反を報告
レビュー を日本語に翻訳する
すべてのレビューを参照します
Amazonプライム会員ならお急ぎ便、日時指定便が使い放題
さらに、映画もTV番組も見放題。200万曲が聴き放題 。クラウドに好きなだけ写真も保存可能。
> プライムを無料で試す