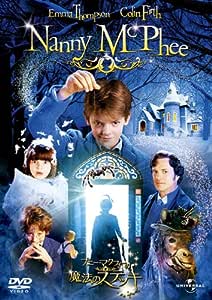 Sue
5つ星のうち4.0 PG more appropriate than U rating
2017年7月7日に英国でレビュー済み
Amazonで購入
A widowed father (Colin Firth) has seven children who are running riot in his household, scaring away a succession of nannies from the agency. The children are all excellent in this film, working together as a team, with excellent comic timing. The mysterious wart-covered Nanny McPhee (Emma Thompson looking most unlike herself) arrives, and takes over….

There's a lot of magic and some humour (mostly slapstick) in the film, alongside some quite sad subplots. The father works for a funeral parlour, which in itself is an odd feature for a children's film. He's lonely, the children are missing their mother. Nanny McPhee is very coercive but she's on their side, and her gradual transformation is nicely done, as the children become kinder and their father less stressed.

I loved this when I first watched it over ten years ago, and recently saw it again with my three-year-old grandson. The rating is U in the UK; the US rating of PG is, in my opinion, more appropriate. I had forgotten that there are a couple of mild ‘bad’ words and a scene full of innuendoes, though nothing explicit. There’s a fair amount of mock violence too, though it's mostly intended to be humorous. It's really more appropriate for children of about seven and upwards.

Still, this is a very enjoyable film with a big name cast, and I’m delighted that I had the opportunity to watch it again!

cora
5つ星のうち5.0 Fun Family Favourite
2018年4月7日に英国でレビュー済み
Amazonで購入
This one is a family favourite for a rainy Sunday afternoon. Lots of fun to be had with Mr. Brown (Colin Firth), his high spirited offspring and the rather formidable Nanny McPhee (Emma Thompson). The film is beautifully made with imaginative sets in a psychedelic colour scheme, and the pranks of the seven youngsters are so outrageous that even the most mischievous children will know that they should not try any of this at home.

This is a lovely film with an equally lovely cast. Colin Firth and Emma Thompson are always great, the great Angela Lansbury, Celia Imrie (an absolute hoot in this) and Kelly MacDonald appear in supporting roles, and with Thomas Brodie-Sangster as the eldest boy of the family there is an experienced pro heading the cast of child actors.

Nanny McPhee [DVD ] - has English subtitles for those who may require them. It also comes with numerous extra features:
- 2 Audio Commentaries
- Casting the Children
- Village Life
- Nanny McPhee Makeover
- Deleted Scenes
- Gag Reel
- How Nanny McPhee came to be

Sofia L
5つ星のうち2.0 The BUMPER: A disappointing Edition
2012年4月17日に英国でレビュー済み
Amazonで購入
There are 2 editions of this film. One might be labelled the original version, the other is tagged THE BUMPER EDITION. Watch out for that one.
It was not easy tracking down what exactly is the difference between the two. My only referense then came from a popular online UK retailer listing all the SPECIAL FEATURES found in the original version and then some. So, we bought the BUMPER.
Wrong!!! BONUS FEATURES are nothing more than a short featurette, a BIG BANG trailer, some page extracts from the BIG BANG book, and an image gallery. No sign of the 2 commentaries, 4 featurettes, gag reel, delete scenes, etc. etc. all to be found on that much preferred original disc.
The video transfer is terrific, no doubt. But if you are looking to add this to your collection, stay clear of BUMPER.
Bah, humbug!

Mrs. Juggins
5つ星のうち5.0 Children excellent
2018年12月31日に英国でレビュー済み
Amazonで購入
A lovely film, I watch it every time it comes on television but my grandchildren do not have television so this was bought as a present for them. I am sure they will like it. The acting of the children in this film is truly excellent.
続きを読む
役に立った
フィードバックを送信中...
フィードバックをお寄せいただきありがとうございます。
申し訳ありませんが、お客様の投票の記録に失敗しました。もう一度試してください。
違反を報告
レビュー を日本語に翻訳する

Blackmale
5つ星のうち5.0 Genuinely belly aching....
2010年4月12日に英国でレビュー済み
Amazonで購入
Knowing nothing but the R5 Kermode review of the sequel I thought "this will be good for the four-year-old at Easter." I bought it leaving it for family viewing while I did the "bloke thing" attempting to self-amputate body parts in the name of DIY.
Hours later grabbed - yes GRABBED by the cheering audience departing our "home" cinema with grins I'd need a power tool to chisel off.

Our age range is broad, taste even more diverse, but the opinion is unanimous, very mature production mixing great story telling of the tallest variety with genuine comic talent.
Way above the typical American holiday fodder, a Mary Poppins for the Harry Potter generation.

PPS
5つ星のうち5.0 Predictable but beautifully made
2007年5月19日に英国でレビュー済み
Amazonで購入
We watched this movie at the cinema, and every bit about it was fantastic. Emma Thompson plays Nanny awfully well. Although some may say it fairy tale nonsense as it's ending is basically revealed in the opening minutes ie no mother...hmm, what is afther going to do. But the boy to manhood undercurrent adds to the magic.

Similar to watching Peter raise his sword against the White Witch's army in the closing battle of Narnia, Simon appears to finally understand what has been happening and that when good is done, happiness reigns.

Colin Firth is brilliant and predictably cast as a typical Englishman of old. He has the mannerisim that many other actors simply cannot imitate.

Elle
5つ星のうち5.0 Great film
2015年3月14日に英国でレビュー済み
Amazonで購入
I remember when this first came out in the cinema and my dad took my 9 year old self and my 6 year old brother to see it and we absolutely loved it!! A film about 7 naughty children who get up to all kinds of hilarious mischief was (and still is!) so enchanting that it makes for a perfect cosy/rainy-day family film! 10 years on and this film is so beautiful and well made that I still laugh so much and don't get bored of watching it! It's definately worth buying!
続きを読む
1人のお客様がこれが役に立ったと考えています
役に立った
フィードバックを送信中...
フィードバックをお寄せいただきありがとうございます。
申し訳ありませんが、お客様の投票の記録に失敗しました。もう一度試してください。
違反を報告
レビュー を日本語に翻訳する

Amazon Customer
5つ星のうち5.0 Magicall film about a Nanny who can get children to behave
2017年2月1日に英国でレビュー済み
Amazonで購入
This one of favourite I think its funny because the children behave nanny McPhee appearance changes which is funny but very strange too. Cannot wait to watch this one night on my own or with my housemates.
続きを読む
役に立った
フィードバックを送信中...
フィードバックをお寄せいただきありがとうございます。
申し訳ありませんが、お客様の投票の記録に失敗しました。もう一度試してください。
違反を報告
レビュー を日本語に翻訳する

Glynis B.
5つ星のうち5.0 Highly recommend
2016年10月1日に英国でレビュー済み
Amazonで購入
We bought this to watch with our 5 year old granddaughter when we looked after her for the weekend. She was absolutely spellbound by it, even forgetting to eat her popcorn she was so engrossed. Loved watching her face while it was on. The story teaches children the importance of good behaviour.
続きを読む
役に立った
フィードバックを送信中...
フィードバックをお寄せいただきありがとうございます。
申し訳ありませんが、お客様の投票の記録に失敗しました。もう一度試してください。
違反を報告
レビュー を日本語に翻訳する