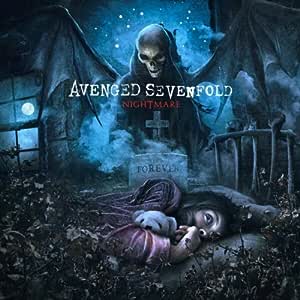 Mr. A. J. Crook
5つ星のうち5.0 A truly special album
2012年10月7日に英国でレビュー済み
Amazonで購入
Wow. There have been very few albums of recent times that I can say that I have been truly engaged by. Personally, I am someone who has grown up listening to the various genres of metal and rock, and enjoy recreating a lot of my favourite tracks on guitar. I also have a quite vast, and varied collection of music, but generally, I need some form of guitar involved for it to catch my attention.

I knew a little of Avenged Sevenfold previously, having listened to City of Evil a fair amount, although would never have put them in my top bands from this record. But wow, what a mammoth jump this album is from that in comparison (I know there have been albums in between). A great opening track (although the most radio friendly perhaps), and an epic track to finish, with consistent high quality throughout without feeling samey.

There is a lot of variation here, and excellent musicianship from everyone in the band, as well as the more obviously superb guitar work and vocals. 'Buried Alive' is a great example of a tight, and well controlled song, essentially in two parts. A cleaner, thoughtful beginning, before unleashing a satisfying crunchy, heavy finish.

It's not all about speed and heaviness, but more meaningful, well written music. Yes it is often very riff driven music, but 'So Far Away' and 'Tonight the World Dies' are awesome examples how melodic the band is on this album, and truly showcases the singers vocal talent. Personally am not someone who is seduced by vocals, I prefer guitar driven most of the time, but was certainly compelled with the vocals on these songs in particular.

What better way to close out the album with 'Save Me' - an almost 11 min feast of intelligent, complex music that pulls the album together perfectly. I cannot speak more highly of this album, which makes a refreshing change to the majority of the music that is kicking around these days.
続きを読む
3人のお客様がこれが役に立ったと考えています
違反を報告
レビュー を日本語に翻訳する

EVIL_ELVIS
5つ星のうち5.0 Awesome, tons of great tracks and not to "Heavy"
2011年2月23日に英国でレビュー済み
Amazonで購入
I really like Avenged Sevenfold ("A7X") but am not perhaps a typical fan, I like most styles of music but don't listen to much Heavy Metal (Metallica perhaps?). Still, I really love A7X's sound. The cheesy eighties electric guitar (often played in duo), the amazingly fast drumming, their great melodies but most of all the way they mix up the harder Metal tracks with slower parts with accessible melodies.

On this album you have tracks such as So Far Away, Buried Alive which are stand out tunes. The fact that the album is dedicated to "The Rev" makes some of the songs even more poignant.

I strongly recommend you try this album if you are a A7X fan, new to A7X or even new to the Genre!
続きを読む
違反を報告
レビュー を日本語に翻訳する

Mark Hughes
5つ星のうち5.0 This is just a great MODERN METAL album
2015年11月5日に英国でレビュー済み
Amazonで購入
AVENGED SEVENFOLD or AX7 as they often use, started out as a metalcore band, abit too much KERRANG MAGAZINE for me, BUT on this album they became a straight forward MODERN METAL BAND. MIKE POURTNEY of DREAM THEATER joined them on drums for the album and tour, and DT are a million miles in music terms away from AX7. This is just a great MODERN METAL album, buy if you like any metal from any era.
続きを読む
1人のお客様がこれが役に立ったと考えています
違反を報告
レビュー を日本語に翻訳する