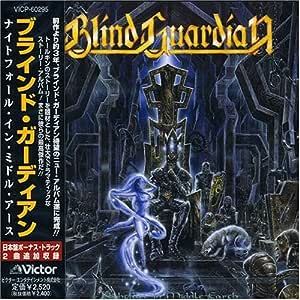 Jonathan
5つ星のうち5.0 Don't Like Power Metal, Don't Like Tolkein... LOVE This Album!
2014年1月27日に英国でレビュー済み
Amazonで購入
This is just unbelievably good, and frustratingly I can't quite put my finger on what makes it so. I've tried other power metal, I've tried other Blind Guardian, but nothing lives up to this masterpiece.

It's very unusual. The guitars are quite low in the mix, often out of focus. Placed front and centre are the huge, explosive choruses and frankly ridiculous vocal harmonies. I think what makes it so good is, while this album is epic and ambitious in scale, it retains a gritty, earthy toughness that elevates it beyond the often cheesy and wimpy sounds of their contemporaries. This is no harp-wielding bard music, prancing about a king's court, this is tankard-slamming tavern music, sung by soldiers. Check out the swaying chorus of "Nightfall" or the bellowing chants of the stunning "Time Stands Still at the Iron Hill" to find out what I mean.

Almost every single chorus on here makes me want to drink ale out of a huge metal tankard with one hand while groping a busty tavern-wench with the other. "Mirror Mirror" isn't great, but beyond that and the ones I've covered we have "War of Wrath", "Blood Tears", "Noldor", "Thorn" and "When Sorrow Sang" to name but a few. All of them make me want to stand tall with my hands on my hips and lead a group of warriors in bawdy singalongs.

And really, I can't recommend it more highly than that, can I?

PS. If anyone knows of an album that might be up my street in the same way this one is, I am all ears.
続きを読む
4人のお客様がこれが役に立ったと考えています
違反を報告
レビュー を日本語に翻訳する

Anders Enggaard
5つ星のうち5.0 Would be ridiculous if it wasn't this good!
2013年8月28日に英国でレビュー済み
Amazonで購入
A power metal concept album based on The Silmarillion? That idea alone quite possibly makes Blind Guardian the geekiest metal band on the planet. The band don't even just take lyrical themes from the book but seem to be eager to retell the story from Tolkien's work as detailed as possible with interludes of actors and narrators doing scenes related to the songs. However it never gets in the way of the music itself which is nothing short of excellent. Filled with memorable melodies and impeccable musicianship the album is as perfect a reimaging as one could possibly imagine. Not one song sounds like the other. From the fast paced opener Into The Storm to the emotionally intense semi ballad Blood Tears, Blind Guardian creates a wide spectrum of moods and emotions to make you feel like you are in Middle Earth during the War of Jewels. While there are many singers more technically proficient than Hansi Kürsch he sings the lyrics with such sincerity and conviction you can't help but be moved by the stories seen from the point of view of characters such as Feanor and Beren. The guitarwork of Andre Olbrich and Marcus Siepen is also some of the best in power metal, able to both make fast and furious riffs and beutifully sublte acoustic pieces. Even if you haven't read The Silmarillion you need this on your shelf if you even like power metal
続きを読む
1人のお客様がこれが役に立ったと考えています
違反を報告
レビュー を日本語に翻訳する