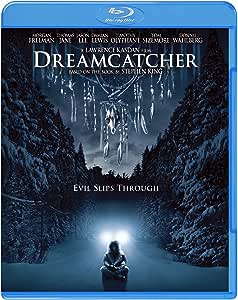 Colonel Decker
5つ星のうち1.0 Telekinisis, aliens up backsides, terrible cgi, morgan freemans eyebrows, and John Waynes gun-this is a disaster
2018年2月12日に英国でレビュー済み
Amazonで購入
Here we have a movie based on a Stephen King book that just never knew what it wanted to be. The shame in giving 1 star to the film is that the first half an hour is actually decent. We are introduced to 4 men who have telekinesis powers, they decide to go away to a log cabin and chill out. That's when the strange stuff happens. Like wild animals marching past their cabin in fear of something, that something ends up being an alien who invades human bodies by hiding up their bum. Oh dear. The powers that the men have are forgotten and this becomes an invasion movie so cue Morgan Freeman. Freeman is involved in a cringe worthy scene involving shooter an officer in the hand because as he admits he's having a bad day. The script written by Lawrence Kasdan and William Goldman is what should have been hidden up their backsides. It is so awful, it's unreal. Oh and lets throw in John Waynes original gun which Freeman proudly owns, what? You're expecting big bird from Sesame Street to be hiding in the woods at one point. The CGI is beyond terrible as is this cheap, hollow movie that doesn't know and has no idea what it wants to be. Film plays out as if we are inside a schizophrenia's head, tiring and annoying. Avoid.
続きを読む
5人のお客様がこれが役に立ったと考えています
役に立った
フィードバックを送信中...
フィードバックをお寄せいただきありがとうございます。
申し訳ありませんが、お客様の投票の記録に失敗しました。もう一度試してください。
違反を報告
レビュー を日本語に翻訳する

aiya
5つ星のうち4.0 uhhhh.....an undescribable film
2016年12月2日に英国でレビュー済み
Amazonで購入
You know how some film just grabs you with a squillion hooks and takes you for a thrilling ride, like the universally acclaimed dr strange, but afterwards one feels a little used even as one understands all the rhetorics?This film is the opposite, not sure if its intentional, but its like someone took a camera, captured some related events that he managed to get hold of, but not yet made sense of, and i liked this aspect of the journey, kept thinking how philosophical and lifelike! What's really good is there is no urgency to find out whats next so i'd watch ten minutes just before bed and fall asleep. That I return the next night for a bit more.Because the special effects and directing is of a sufficiently high standard, and there's something about the film's insousiance, one simply doesn't want to give up yet....like ive done with so many dreary formulaic films. The thing is, i wouldn't describe this film as good or artistic or believable yet the way all the improbable cliches had been put together, the viewer can totally believe the outrageous whacky stuff as a slice of boring real life. That i think is why i didn't abandon it because whoever directed it is so so clever In underplaying the material so greater cinematic magic can be realised.
続きを読む
5人のお客様がこれが役に立ったと考えています
役に立った
フィードバックを送信中...
フィードバックをお寄せいただきありがとうございます。
申し訳ありませんが、お客様の投票の記録に失敗しました。もう一度試してください。
違反を報告
レビュー を日本語に翻訳する

Trevor Willsmer
5つ星のうち5.0 Five stars - for all the wrong reasons!
2005年7月20日に英国でレビュー済み
Amazonで購入
Dreamcatcher almost gives Lifeforce a run for its money in the greatest unintentional comedy ever made stakes. I had to rewind whole chunks of the movie to check my eyes weren't deceiving me: oh, if only I hadn't had the flu the one week it played over here - to have seen this one with an audience! After a solid opening its descent into insanity is so rapid and so unashamed that you could never mistake it for a good film but still end up loving it more than many an undisputed classic because it's just so much fun. At times you even find yourself wondering if Lawrence Kasdan made it as a drunken dare. If so, all I can say is get that man another dozen drinks, and fast!

This fantastic (in every sense) movie has everything - Ripleys and s***weasels, Damian Lewis doing a comedy English accent whenever he's possessed by the alien 'Mr Grey', Morgan Freeman with crazy giant white eyebrows that even David Hemmings would have envied waxing lyrical about John Wayne's gun, Tom Sizemore seeing those aliens long before the effects boys put them in the picture, a s***weasel trying to bite Timothy Olyphant's dick off, the toilet scene from hell and more farting in a single motion picture since Blazing Saddles. The only thing that was missing was the gratuitous nudity from Mathilda May, but hey, maybe they're holding that back for the sequel. I am truly content to live in a world where multinational corporations spend tens of millions of dollars on such films. Definitely the most joyful and entertaining film I've seen this year.