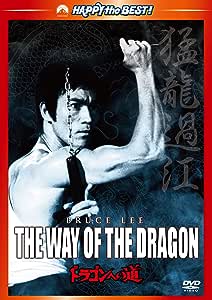 michael claydon
5つ星のうち5.0 Good action, but a bit corny.
2019年7月20日に英国でレビュー済み
Amazonで購入
This is one of my favourite Bruce Lee films. The action is good. And of course the fight with Chuck Norris is well worth watching. The Chinese theatrical characters are very corny. Nowhere near as polished as Enter the Dragon. But somehow it has a certain charm. The attemp at humour doesn't really work on my modern western mind. I bought this, having seen it before in its cut version. So I knew what to expect and still love it and accept it's faults so that I can see the excellent action
続きを読む
違反を報告
レビュー を日本語に翻訳する

Buyer of CDs&#47;DVDs &amp; BluRays
5つ星のうち4.0 Bruce Lee - Way Of The Dragon
2012年8月27日に英国でレビュー済み
Amazonで購入
I am a big fan of Enter The Dragon, had it on DVD for years. I decided to check out this DVD, I have never seen it before.
I was surprised how 'Hong Kong' it was. Bruce Lee is even attempting comedy at the beginning of the movie, he had a great need to use the Mens Room at certain occasions, Hong Kong slapstick humour at its best.
I also enjoyed Nora Miao's performance, she was very restrained but very effective in her support role, very petite and really complimented Bruce Lee's role.
The story really is the let down, considering its Bruce Lee's first movie as a director its not that bad.
The action scenes are what this film is all about and the Gung Fu (Kung Fu) is magnificent. Bruce Lee's physical presence his incredible strength is very apparent.

Overall a very entertaining film if listened to in the original Cantonese soundtrack, I found the American overdubs to be awful.
続きを読む
3人のお客様がこれが役に立ったと考えています
違反を報告
レビュー を日本語に翻訳する

Haunted Nostril
5つ星のうち4.0 THIS IS 'THE WAY' TO DO IT!
2009年2月28日に英国でレビュー済み
Amazonで購入
Bruce lee plays Tang Lun, a simple country boy with mad martial arts skills. He is sent to protect a young woman's restaurant from the mafia by her Uncle (and presumably Tang's master). Prepare yourselves for some hit and miss humour, the misses of which are swiftly countered by Lee's screen blurring feet and fists, Some dodgy tunes and some amazing 70's fashions.

THE HIGH KICKS:
- Lee is on top form here (as he always was) and shows why he is so prevalent in people's heart's and mind's as the greatest on screen martial artist of all time.
- The humour is often maligned by fans and casual viewers alike, but when it's combined with Lee's unparalleled physical skills it really does shine - some of the moves in the duel nunchack scene still tickle me after countless viewings.
- `That' fight scene with the ever fuzzy Chuckles Norris is as good as `they' say. Two fantastic fighters from different sides of the planet prove once and for all that face kicking, not love, is the universal language.
- Considering this is Lee's directorial debut he gets a heck of a lot of things spot on but, again, the action is where it's at, shot for shot perfection.
- The young lady that drags Lee off to a hotel room is pure 70's hotness of the highest order. That was one time where Brucey's flee footed antics really let him down. The silly billy.
- I don't know about anyone else but the twist near the end, just after all the lads from the restaurant are helping Tang fight the two fighters, really threw me first time I watched it: I never saw it coming!

BELOW THE BELT:
- Some of the humour is really stilton drenched and misses the mark by a mile.
- Some of the editing is a bit sloppy, but it's never off putting.
- That old lady at the airport at the beginning is proper annoying.
- Tang Lung! Why did you run away from that lovely lady in the hotel room! WHYYYYY! Get me a time machine now! I would not be leaving there for at least a good - ooh - two minuets!
- Chuck Norris' back is like a hideous, hairy, forest fire of doom! GET IT AWAY!

THE FINAL BLOW:
Just stunning. This is Kung Fu heaven and if you appreciate the genre this should be high in your top 20 of all time. If you're not into martial arts film Lee's incredible physical prowess will still peel your dome (even if he can't make you laugh all the time!).
続きを読む
2人のお客様がこれが役に立ったと考えています
違反を報告
レビュー を日本語に翻訳する

Patrick M Cunningham
5つ星のうち5.0 Bruce Lee Uncut and Unleashed
2010年1月19日に英国でレビュー済み
Amazonで購入
What can be said about the late Bruce Lee? He was the "Real Ultimate Warrior" an inspiration to all martial artists around the world and in this unreal uncut version of the classic "Way Of The Dragon" Bruce is unleashed and in full flight with the double nunchaku scene re-instated in its full spectacular glory. The fight scenes are absolutely breath taking and the final show down between Bruce and Chuck Norris in the Colosseum is some thing you will not forget. When these two gladiators face off against each other a battle of epic proportions follows. This was also Bruce Lee's concept as he wrote, directed, choreographed and starred as Tang Lung our lone hero who comes to the aid of his Chinese relatives in Italy who are being harassed and bullied by a cruel and vicious crime lord, until Bruce arrives in town to do some bullying of his own with high kicks and lightning fast fists to entertain and thrill you from start to finish.
This movie remains a classic to this very day rivaled only by "Enter The Dragon" which was Bruce Lee's final completed movie (He died soon after completing this movie in 1973 aged just 32). Many years after his death he still continues to stun us all with his superior skill and fans both old and new can appreciate the true meaning of Martial Arts and Bruce Lee was and always will be "The King Of Kung Fu" "The Little Dragon" maybe gone but he will never be forgotten. Legends never die.........
続きを読む
1人のお客様がこれが役に立ったと考えています
違反を報告
レビュー を日本語に翻訳する