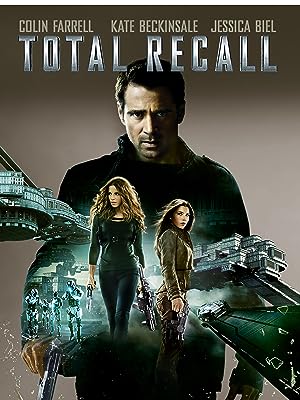 R. J. Chippendale
5つ星のうち4.0 Worth watching.
2018年5月24日に英国でレビュー済み
Amazonで購入
If you are expected an Arnie remake then forget it. Collin Farrell does a really good job of anguished and mixed up character portrayal. Will watch again as there is a lot going on and seeing it once is not enough. RJC.
続きを読む
7人のお客様がこれが役に立ったと考えています
違反を報告
レビュー を日本語に翻訳する

sjh46
5つ星のうち3.0 Probably better if you've not seen the original
2019年2月14日に英国でレビュー済み
Amazonで購入
In theory this should have been a 5-star movie. It's got a fantastic cast with three of my favourite actors starring - Kate Beckinsale, Colin Farrell and Bryan Cranston. Then there's the fact that special effects technology of sci-fi films have vastly improved since the original came out decades ago.

But it isn't. Its fairly entertaining, but is let down by falling into the classic remake trap of the special effects vastly improving at the expense of the story. It's not developed enough to really let it be its own thing and deliver new, exciting twists. They've changed the location and the robots look fantastic, but the story doesn't deliver anything else that you weren't expecting. Not only is the new story weaker, the scenes they've obviously just lifted straight from the original don't have as much impact in this one. Its always cool to acknowledge another movie subtly, but not when its just ripping out chunks of content.

I wish they'd tried something radically different for the remake. I think if you haven't seen the Schwarzenegger version (which is easily better despite looking a bit dated) then you might like this a lot more. If you have then it sadly comes across as being a bit too much style over substance.
続きを読む
3人のお客様がこれが役に立ったと考えています
違反を報告
レビュー を日本語に翻訳する

Its well made and does look good, an has good acting from the actors. But I found this film dull and hollow.

I know this film is based on the book, but the Other movie the 1990 movie with Arnold Schwarzenegger was a way better film. It was fun and exciting, yeah it isn't as good looking as the 2012 version but it has more soul. The 2012 version is just dull an bland.

I did like the robots an that it was based in England but its just kinda boring even the fight scenes were dull, it doesn't even have the blood like the 1990 film, that's what made it so cool, that had bone crunching action and had some humour which made it fun.
The 2012 film takes it more serious, but it still coulda been more exciting.
.
And yes it still has the woman with the three boobs lol.

Its still an ok film, but that's it really ok, Its just ok. Could of been better.
続きを読む
8人のお客様がこれが役に立ったと考えています
違反を報告
レビュー を日本語に翻訳する

PIM
5つ星のうち3.0 Pristine Blu Ray Quality, same cannot be said of the movie!
2020年2月28日に英国でレビュー済み
Amazonで購入
Hi, this item was received in short order and was of very good quality. I had wanted this Blu Ray double-disc edition for my collection for some time as it is quite rare, not being the edition available in stores such as HMV. With regards to the quality of the movie: despite looking detailed and well designed, this movie is a by-the-numbers plagiarised exercise utterly ripping off Blade Runner, iRobot, 5th Element and even the original Total Recall movie; imagine copying the exact same story as the 1988 Arnold Schwarzenegger/Paul Verhoeven original but without actually going to Mars??! A totally unnecessary movie that had a £130 million price-tag and completely bombed at the box office. This should have won the 'Most Unnecessary Sequel or Remake' Razzie for that year! I cannot remember the Razzies for 2010 however! With regards to the disc's features: there are some interesting extras on this double-disc edition not available on the mass market single disc edition. Again, this movie is visually resplendent, though needn't have been made quite frankly. It certainly didn't need to be a Total Recall movie, it could have been anything. Stick with Arnie's original and get your *** to Mars!
続きを読む
1人のお客様がこれが役に立ったと考えています
違反を報告
レビュー を日本語に翻訳する

Pauly
5つ星のうち4.0 A great sci-fi chase movie.
2018年8月15日に英国でレビュー済み
Amazonで購入
I think a lot of people were disappointed that the Mars aspect was taken out of this particular remake. It didn't bother me. The whole film seemed like one extraordinary chase fight, chase fight, chase scene after another.
It definitely felt like a very concrete dystopian action movie. The acting by Colin Farrell was nicely underplayed. Excellent.
I would have given it 5 Stars but the strobe light work was really harsh. Just be a little careful if you have epilepsy or light sensitivity, if you do it could be a problem.
続きを読む
2人のお客様がこれが役に立ったと考えています
違反を報告
レビュー を日本語に翻訳する
すべてのレビューを参照します
トップへ戻る
Amazonについて
Amazonでビジネス
Amazonでのお支払い
ヘルプ＆ガイド
日本語ショッピングのための言語を選択します。 日本ショッピングのための国/地域を選択します。
© 1996-2021, Amazon.com, Inc. or its affiliates