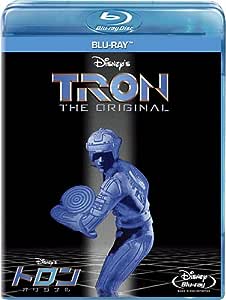 I. Baxter
5つ星のうち5.0 TRace ON! Bring on the Logic Probe!
2015年12月1日に英国でレビュー済み
Amazonで購入
If you're old enough to remember the Trace On command in BASIC, you'll still remember the thrill of watching the worlds first movie with a substantial CGI content. This kicked off an innumerable heap of movies, both by it's plot and the new cinematographic methods it introduced.
Like Forbidden Planet, the film that inspired Star Trek, it may not seem very special to younger movie goers more used to the jaw dropping effects of today, but with a bit more of the old willing suspension of disbelief employed, it still seems to me one of the best SF films ever.
Like the first Elvis album, the first Wendy Carlos Moog-music, the Blues Breakers Beano album,technical firsts may soon seem dated to those who come after, but somebody had to be first, and without them so much might have been lost.

Mr P from Cheshire
5つ星のうち5.0 One of the classics! 5 stars!
2018年3月5日に英国でレビュー済み
Amazonで購入
This was only ever going to get 5 stars from me. I mean it’s Tron! Nostalgia at its best, how could anyone not love this cult classic. Fun, dark, entertaining and so before it’s time, if you see the latest version watch this one first for the full impact! Tron was on the money back then, it not everyone got it, now we have retro TV series and movies popping up all over the show, still holds it own today. Bridges at his best! Sit back, enjoy! Love it love it.
続きを読む
1人のお客様がこれが役に立ったと考えています
違反を報告
レビュー を日本語に翻訳する

David B
5つ星のうち4.0 Allegorical and visually before its time
2008年2月1日に英国でレビュー済み
Amazonで購入
Surely the storyline of this film is deeply allegorical and metaphysical. "The Word became flesh and dwelt among us".

The opening shot, not always shown, establishes the parallel between the computer world and the human world, and the closing shot reinforces this. The human world is the world of the creators, or "Users", and Flynn becomes a messianic figure "made computer flesh" to correct the problems caused by wicked User/s.

The evil figures in the computer world know that the Users (or creators) are real, but try to convince others that they are not (see James 2:19 in the New Testament).

In the end of course, Flynn as "the word made flesh" corrects the problem and is restored to his proper sphere, also now with the enhanced status he is entitled to as proven originator of important programmes (see Philippians 2:5-11).

Overall the film has a strange, subdued, beautiful yet wistful feel about it, due perhaps to the extended section within the computer, and its very particular "look". The mood is also due in no small part, I think, to Wendy Carlos's powerful score.

Visually the movie is ground-breaking, but perhaps the pace lags a little in parts. It was not a huge success on its release in 1982. Maybe the timing was not quite right, for people did not yet have PCs and, not being generally familiar with computer terms, perhaps could not relate well to the idea of a world inside the computer. Possibly too, the whole look and feel of the film was too "down-beat" for the time.

Overall however, there is a kind of elegance and dignity about the movie, in addition to its pioneering use of CGI effects, that will see it stand the test of time and have an assured place in the movie canon.

Droid
5つ星のうち5.0 Must be good, I bought it again.
2009年8月24日に英国でレビュー済み
Amazonで購入
TRON was in its time a ground-breaking film and not copied or repeated either by others, probably due to the complexity of creating it with the computers of the time. You could probably do it on your home PC nowadays with the changes in hardware since this was made.

Someone stole my first copy after I was burgled, but it was one film that I had to have back in my collection. Some say it's dated now, which is true to some degree, but if you cannot appreciate the technical achievement in creating this film using the equipment of the time, then I feel sorry for you. The story is a typical bad guy needs to be destroyed by the good guy, but in this case both are computer programs and not humans. The twist is that a human, played by Jeff Bridges, has been dragged digitally into this world but ultimately helps to save it.

A great film even taking into account its age and the extras disc is a welcome bonus, full of star interviews and "how it was made" type detail which is fascinating and a testament to the creativity of the film makers of the time.

Sean Bradley
5つ星のうち5.0 Not only Hovis is as good today!
2015年1月18日に英国でレビュー済み
Amazonで購入
First watched this at cinema way back on its release. I didn't really understand most of the plot as I had never touched a computer. Although I loved arcade games. Watched it again recently and I loved it more than the first time. Probably because that I have a basic understanding with computers now so can understand the basic jargon contained within.
The special effects were groundbreaking in their day and do not look too out dated today.
Overall, a brilliant family film for all ages.
続きを読む
1人のお客様がこれが役に立ったと考えています
違反を報告
レビュー を日本語に翻訳する
すべてのレビューを参照します
Amazonプライム会員ならお急ぎ便、日時指定便が使い放題
さらに、映画もTV番組も見放題。200万曲が聴き放題 。クラウドに好きなだけ写真も保存可能。
> プライムを無料で試す