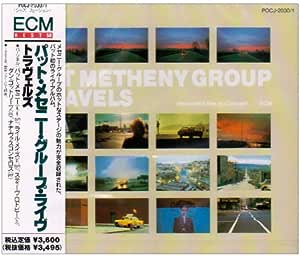 banginon
5つ星のうち4.0 this is a not perfect perssing in ny experience this is the second copy i have bought
2019年12月28日に英国でレビュー済み
Amazonで購入
this second copy as a fault on side three extradition the start is very clicky rough sounding then a definite click that will probably develop like the first copy as anyone else had this rest of it is superb a fave of mine
続きを読む
役に立った
フィードバックを送信中...
フィードバックをお寄せいただきありがとうございます。
申し訳ありませんが、お客様の投票の記録に失敗しました。もう一度試してください。
違反を報告
レビュー を日本語に翻訳する

Johnny Roc
5つ星のうち5.0 Simply one of the best live records ever!
2016年10月13日にアメリカ合衆国でレビュー済み
Amazonで購入
So this was the live record that vividly caught the rapidly rising stars of Pat Metheny and Lyle Mays in 1983 when they were in their early-mid 20's. In listening to the record and hearing the crowd noise, I am taken back to the many times that I was fortunate to catch Pat and Team dispensing their musical magic. Twice at University of Georgia, around the time this record was released, to be followed by multiple shows later on, including the Fabulous Fox theatre when they were touring a few years later in support of the First Circle record.

This recording won a grammy for Best Jazz Fusion Performance in 1984, and is very special and unique to PMG fans as it contains both live versions of studio tunes, as well as several tunes that were ONLY released on this live recording, including The Fields, The Sky, Straight on Red, Farmer's Trust, Song for Bilbao, and Extradition. Most of them Brazilian-inflected in keeping with the burgeoning theme that would continue for
much of the 80's with other group records like Offramp, The First Circle, Still Life (Talking), and Letter From Home.

Fast forward to now, the canon for Pat Metheny Group and Pat's solo work is rather vast at this point, but this one is and always will be a favorite for me, in part as it was the soundtrack for my life in my 20's. Despite those personal reasons, it stands on its own musically 33 years later. The groundbreaking work that PMG was doing then, and has continued to do by making jazz more accessible without compromising its core principles make this album one that will continue to stand the test of time. Whether on vinyl or digital, it all sounds fantastic and will transform you.
続きを読む
5人のお客様がこれが役に立ったと考えています
役に立った
フィードバックを送信中...
フィードバックをお寄せいただきありがとうございます。
申し訳ありませんが、お客様の投票の記録に失敗しました。もう一度試してください。
違反を報告
レビュー を日本語に翻訳する