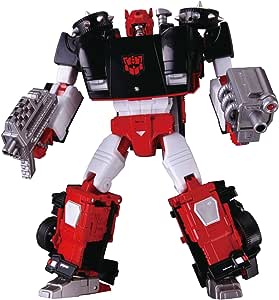 RoboGriffey
5つ星のうち5.0 G2 Sidewinder rocking the 90's look with a grimace a machine gun and a grenade launcher. Good Stuff!
2015年4月15日にアメリカ合衆国でレビュー済み
Amazonで購入
This is a G2 recolor of Takara's already released G1 Transformer Sideswipe. and it is gorgeous. The reversal of the red and black works perfectly. The new highly expressive face is the coolest thing I have ever seen. And replacing the original releases weapons for the 90's comic style huge machine gun, grenade launcher and sword was a stroke of brilliance. Oh and those spiked wheel shoulder pads :)

This is a great figure. One that many collectors overlook in favor of the more traditional Sideswipe. That is a shame. he has the strongest personality of all of the MP releases.

Parents be advised this is NOT a childs toy (as if the price didn't give that away). These are adult collector figures. So they are much more complex and fragile then what you will find on the toy store shelf. Recommend you stick closely to 13+ for these. And even then you may need to offer some help in transforming it. The transformation is complex and sublime. Not for a beginner.
続きを読む
1人のお客様がこれが役に立ったと考えています
役に立った
フィードバックを送信中...
フィードバックをお寄せいただきありがとうございます。
申し訳ありませんが、お客様の投票の記録に失敗しました。もう一度試してください。
違反を報告
レビュー を日本語に翻訳する

Christina
5つ星のうち5.0 I love this figure to death
2017年6月1日にアメリカ合衆国でレビュー済み
Amazonで購入
I love this figure to death. I had a generation 2 Sideswipe in 1993 and my mother took it to punish me and lost it forever. Every year I looked for it and never found it. Even now as an adult, whenever I help her move, I look for my diecast friend. Well now I own this beast. Crazy well engineered and looks amazing in both modes with all the comic accessories such as the spiked tires and sword that my G2 sideswipe didn't come with. Easily my favorite masterpiece.
続きを読む

Daniel S.
5つ星のうち5.0 Pure 90's over-the-top awesome in one figure.
2014年5月4日にアメリカ合衆国でレビュー済み
Amazonで購入
First, I should say that the first time I saw this figure online...I hated it. Absolutely hated it.

Then I looked at it more closely. Yes, the car mode is a blank Lamborghini, which is just awesome. But then I looked more closely at the robot mode and realized...this is the most personality that TakaraTomy/Hasbro has packed into a figure in a LONG time.

Yes, this is Sideswipe. Yes, its basically the same mold as the Lambor/TigerTracks/Alert MP mold. But...they based it on the Transformers Generation 2 version of Sideswipe, which I affectionately am now calling Lambo. The grimace of anger on this figure's face and the HUGE ENGINE GUNS are taken right from the pages of the 90's Transformers Generations 2 comic series, along with the spiky tires on the shoulder! I skipped this comic series back then, but after seeing the artwork from his apperances...well. I kinda had to get him.

The only thing he's missing in robot mode is the bandolier...but I understand some aftermarket folks are working on that already!

My figure arrived with near-perfect paint applications, with only one or two tiny tiny imperfections in almost unnoticeable places. And since he's black...who's going to notice from even a moderate distance?

The transformation is very impressive, and the weapons (two HUGE GUNS, and a big ol sword) combine along with the spiky tires (which do not figure into the transform...they're for looks only in robot mode!) into a Big Huge Gun Sword Spiky Tire Thing and can peg into the top of the car for storage. And so this sleek black Lambo can have Big Huge Gun Sword Spiky Tire Thing jutting from the top, ready to shoot/skewer/slice anything he rams into.

If you already have Sideswipe, should you get this? Well, I don't have Sideswipe and didn't as a kid back in the 80's, so I really have no emotional connection to the character at all...but after getting this figure, I'm totally in love with it, and it now has a treasured place among my collection. I almost like him better than MP Bluestreak, and I ADORE that figure.

derrick
5つ星のうち5.0 masterpiece g2 sideswipe/lambor
2014年6月1日にアメリカ合衆国でレビュー済み
Amazonで購入
so a while back the whole transformers masterpiece line got a little overhaul with mp-10 and from there, the line has hit a home run after home run, mp lambor was one of the first cars of the reset to come out. lambor came out to rave reviews despite some qc isssues. the problems that were there with the first run are gone and now what you have is another example of a repaint/redeco of a figure that works!
g2 sideswipe was very present in the g2 universe so why not make a figure. this mp is awesome!!!! the black paint job shines! the guns are so big and amusing that it works! and the sword... you can never go wrong with a sword! but the face, that face is freaking great! the over exaggerated look or anger/constipation :) works so well. it also comes with spiked wheels that can attach to his shoulders and once they plug in, the stick very well. if you don't want them, put them to the side, he looks great either ways. now i do know repaint and redecos like this are not for everyone, but looking across the board he is more affordable to mp lambor. do yourselves a favor and get this bad boy, you will not be dissapointed!!!! A+
続きを読む
1人のお客様がこれが役に立ったと考えています
役に立った
フィードバックを送信中...
フィードバックをお寄せいただきありがとうございます。
申し訳ありませんが、お客様の投票の記録に失敗しました。もう一度試してください。
違反を報告
レビュー を日本語に翻訳する

PJ
5つ星のうち5.0 G2 is great
2014年7月18日にアメリカ合衆国でレビュー済み
Amazonで購入
This G2 version is great. And for the price I found no reason why to overpay for the normal version. The additional accessories are even a great bonus. The oversized weapons and sword add to the awrsomness to this figure.
続きを読む
役に立った
フィードバックを送信中...
フィードバックをお寄せいただきありがとうございます。
申し訳ありませんが、お客様の投票の記録に失敗しました。もう一度試してください。
違反を報告
レビュー を日本語に翻訳する

s losee
5つ星のうち5.0 Solid and precise movements
2015年2月1日にアメリカ合衆国でレビュー済み
Amazonで購入
This transformer was awesome! The parts move smoothly and, with support at first, my five-year-old grandson, the recipient of the gift, was able to do it. It is solidly built--like transformers from the first time around--and will last. This time I'll know to save it for the next generation and not to get rid of it when he outgrows it. This is a favorite.
続きを読む
役に立った
フィードバックを送信中...
フィードバックをお寄せいただきありがとうございます。
申し訳ありませんが、お客様の投票の記録に失敗しました。もう一度試してください。
違反を報告
レビュー を日本語に翻訳する