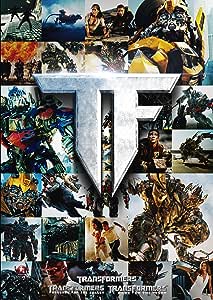 Rachel
5つ星のうち4.0 Great!
2012年5月28日に英国でレビュー済み
Amazonで購入
The first two transformers movie are amazing, all characters, especially the transformers themselves are fantastic to watch and transform, the first two movies are nice alternatives to other action movies. Both the first and second film have great story-lines and all characters are enjoyable. Even my nephew who is six years old enjoyed these movies! Anyone of any age can easily enjoy these movies.

But the reason for the four stars and not five is because of the final film, 'dark of the moon'.

Sam who was the 'lovable' hero in the first two movies as now turned into a screaming baby, in almost every action scene he's screaming, no exageration. Megan Fox has left the franchise and has been replaced by a trophy girl, she is beautiful but cannot act to save her life and the relationship between her and sam is awful and not interesting in the slightest and all she does in the movie is scream for Sam's help, where as Megan Fox had her own story and unique qualities and had much more of a significance.
The autobots have seemed to have been 'dulled' down, Bumblebee almost seems static! The storyline in theory is quite good but lacks the 'energy' in the first two films.
The film drags on for way too long and the ending is terrible, for literally 45 mins in the film, sam and his girlfriend are trapped in a building, just screaming! The final film is just full of explosions and screaming.

Dannystaples
5つ星のうち5.0 SO...MUCH....CARNAGE!
2013年1月14日に英国でレビュー済み
Amazonで購入
Any film crammed with alien robots, major city wide destruction and actresses that look like models is a hell of a film in my opinion. Here you have three of them. I think I prefer the last girl (who's name I don't know) from film three is the better actress and very attractive. Megan Fox is good as well although her acting sometimes makes me want to push pens into my eyes and ears. Shia LaBeouf is a legend. Kinda think his overly chatty ways grow a little thin in the last movie but he is still great.

So really all the films are great, think the first is the best and then it tapers off a little but all three are totally epic action wise.
続きを読む
役に立った
フィードバックを送信中...
フィードバックをお寄せいただきありがとうございます。
申し訳ありませんが、お客様の投票の記録に失敗しました。もう一度試してください。
違反を報告
レビュー を日本語に翻訳する

Jazmin Rippingale
5つ星のうち5.0 Excellent
2016年7月14日に英国でレビュー済み
Amazonで購入
Was looking for a movie set for ages for my children and finally found it, they absolutely love transformers so having them all in the same DVD box is ideal.

The production values are high and the computer animation/effects are unbelievably good quality.

Amazon Customer
5つ星のうち4.0 As action movies...
2013年7月22日に英国でレビュー済み
Amazonで購入
... the TF series works well - the music and visuals are amazing in most parts. The storyline is broken though, with things in the third movie that don't fit with the first - even the second with it's "we had met before" basis is okay, but the third introduces more fractures. Overall this is a good box-set providing you take the movies as-seen and don't try to think about it on too many layers.
続きを読む
役に立った
フィードバックを送信中...
フィードバックをお寄せいただきありがとうございます。
申し訳ありませんが、お客様の投票の記録に失敗しました。もう一度試してください。
違反を報告
レビュー を日本語に翻訳する

Smart-T
5つ星のうち4.0 This is way out there for the likes of me but I'm still doing my best to keep up with the action.
2013年6月15日に英国でレビュー済み
Amazonで購入
Fast moving action film. I can get a little bit left behind and find that on the first viewing of these 3 videos I've not been able to take in everything, but the good thing is that I can watch them again in my own time. I simply love the way these cars, lorries and other machinery can transform themselves and didn't know I could get such a buzz out of watching but it's really cool stuff.
続きを読む
役に立った
フィードバックを送信中...
フィードバックをお寄せいただきありがとうございます。
申し訳ありませんが、お客様の投票の記録に失敗しました。もう一度試してください。
違反を報告
レビュー を日本語に翻訳する
その他の国際レビューを読み込む