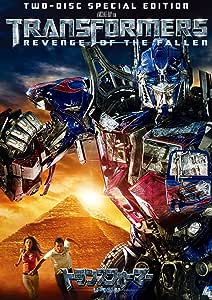 andy
5つ星のうち4.0 Overlong? Maybe. Entertaining? Definitely
2014年2月16日に英国でレビュー済み
Amazonで購入
A little back story first; I'm notorious for buying DVDs on the cheap on Amazon just for the sake of adding to my collection- Own over 600 DVDs at this present moment in time, spanning all types of genres and eras. Never understand why I do it, but I usually 'binge buy' and end up getting 5-6 films at any given time, only to not watch them until months later.

This happens to be one of 'them' films- I brought the first Transformers film a long while back now, and being the kind of person who buys films in a series just so I own them all (am I the only person out there who does this??!) ended up buying this and 'Dark of The Moon' at the same time (for a combined price of under £3 at the time too- bargain!)

Literally have only just got around to watching this movie 4 & a half Years after it was released (todays date being 15th February 2014) after a heavy day studying for an accountancy exam- After a solid 8 hours or so of revising I felt I deserved to relax for the evening and scanned my collection for something suitable to watch.

As I stated before, I own a wide variety of movies, but wanted a typical 'Saturday night' kind of film- Something that I could switch off and zone out to watch, something that typically doesn't have much of a plot or any noteworthy acting in, but something that would entertain me all the same.

This certainly ticked all the boxes; the CGI was good, it was fast paced for the most part of the film, and although it will never be in my favourite films of all time, it did the job required of it- Considering i'm not the biggest fan of the action genre (typically films heavily reliant on action scenes to progress a story along rather than a good script are my biggest nightmare in films but on a given time or day I can deal with them) nor the greatest fan of Transformers (I grew up in the 80's, but was always a Ninja Turtles kid...) think the biggest compliment I could pay the film is I actually enjoyed it!

Maybe I had low expectations after hearing so much negativity about it or maybe it's the fact that it was such a simple film to sit down and watch but recommend it all the same.

The Autobots and the US military have formed an alliance called NEST, their singular goal is to rid the World of Decepticons. But now they face their biggest challenge, because heading for Earth is the ultimate destroyer, The Fallen.

Michael Bay has never been the most subtle of film directors, he knows how to have fun, and in the main he knows how to drag his target audience along with him for a slam bang good ride. After the hugely enjoyable Transformers film, and after its subsequent success, he has crafted a sequel that he felt needed a more is more approach, where everything is bigger and louder and nothing pauses for breath. The end result is a dizzying ball of entertainment that's sadly devoid of substance. If ever there was a film to be put forward as OTT then Transformers 2 is a leading candidate. The plot is thin yet unnecessarily made complex by the writers, who you feel are trying to be heard in amongst the eye candy carnage, while Bay even resorts to cheap moments of crudity to get some laughs for his film. His cast are fine, yes Megan Fox seems to only serve as a drawing in weapon for the randy teenagers, but she still works well off of the ever likable LaBeouf, who in turn continues to deliver a good line in action comedy performance. Pity, tho, that in a film that's so big, with everything expanded, that John Turturro doesn't get more screen time. Only he, with his visual comedy at optimum, can make a metal testicle scene seem less crass than really it is.

When all is said and done, all the human actors are playing second fiddle to the Bots/Cons and metal critters. To that end the film is exciting, undeniably so. Sure some of the set-ups riff on other movies that have gone before it, but Bay is the master of Bayhem, there's just too much fun to be had if one is prepared to forgive its shallow center. With a third film on the go and set to be released in 2011, without out Megan Fox (Rosie Huntington-Whiteley slipping into the considerably short skirt this time), it's anyone's guess what we will actually get this time. Will Bay pull back a touch and give us a story, with characters given time to breath? Or will it be bigger and noisier than part 2? You hope it's the former, but even if it's the latter, it will be fun for those after a certain level of popcorn explosive cinema. Transformers 2: Revenge of the Fallen is like a great ride at the funfair, one you have been on four times in a row. You know you have had a great time, but as your head starts to spin and your stomach feels queasy, you wonder if it was just too much overkill? 7/10
続きを読む
5人のお客様がこれが役に立ったと考えています
違反を報告
レビュー を日本語に翻訳する

Paul Tapner
5つ星のうち4.0 lots of transformers transforming
2010年2月15日に英国でレビュー済み
Amazonで購入
A sequel to the 2007 movie that brings us back to the main characters from that. Two years have passed for them. It doesnt make much concession to those who didnt see the first film but it shouldnt be hard to get into anyhow.

Main character sam is off to college and is getting along nicely with girlfriend Mikaela. He's also trying to distance himself from the whole alien robots whom he got involved with in the first film. The good guy autobots are helping the military destroy the evil deceptions. But the latter have a whole new plan that involves a figure from their history. As that kicks into action, nobody is safe, and it's time for sam and mikaela to help save the world again.

This builds things up to a much greater scale than the first film, and it brings in a lot more of the robots, both good and bad ones. This is the right decision but there's so many new characters, few of whom get anything other than cursory introductions, that those who don't know the transformers characters from other media might be a bit confused. There were times when I thought a scorecard would have helped.

Some have rather silly voices and some are used for comic relief, but these ones do at the same time have a fair amount of character as a result, so they work.

The plot also being move involved means you do have to work at it, a little more than you might expect from a piece of escapist entertainment.

And yet, whilst it's not as focused as the first film, it does come the big action battle climax manage to get you caught up in things. As humans and alien robots alike battle evil forces and strive to do the right thing and are quite prepared to put their lives on the line, it's not hard to find yourself rooting for them all the way.

Parents please note that this is 12 certificate because of a few jokes about drugs and other things of an adult nature so it has parts that may not be entirely suitable for young children.

Having said all this though, when I watched it a second time, I found it worked better. Now that I'd gotten used to the plot and all the new characters I could take in all the detail instead. And once you can do that, it's not bad at all. But if there's so much detail in the first place that you need two viewings to fully appreciate it, then maybe it's a bit too involved for it's own good.

A good piece of entertainment all in all though, and I look forward to another film in the series. Hoping at the same time that it will be a bit more focused.

The two disc edition of the dvd is quite a decent package.

It has the following languages and subtitles:

The first disc has a commentary from the director and the two writers.

The second has a two hour and ten minute long making of documentary, that can be watched all in one or in seven shorter sections. Incredibly comprehensive with lots of behind the scenes shots - not least the director fine tuning the visual effects images two hours before the premiere - this is absorbing viewing.

A day with Bay is a thirteen minute long look at the directors visit to japan for the world premiere, and all he had to do on the day of it. It's quite interesting viewing, to see what such people go through from day to day.

Transformers data hub shows you lots of production designs for a few of the robot characters.

Deconstructing visual bayhem shows the cgi storyboards for various scenes, each with a commentary from the designer. These can be watched all in one - running for twenty three minutes total - or one at a time. Interesting visuals and a good commentary make it a quite interesting look at how films like this are made.

25 years of transformers is a rather short feature about the transformers brand. It's not a documentary about the characters over the years, rather about how the brand has adapted over the past couple of decades. Once you accept it's going to be the latter not the former it does get engrossing.

The cinema trailer for the movie.

And a pop video for a song that appears in the film. Decent song. Good video.

So not a bad package for a fairly good movie.
続きを読む
2人のお客様がこれが役に立ったと考えています
違反を報告
レビュー を日本語に翻訳する

Sam
5つ星のうち4.0 Pretty good sequel
2011年8月9日に英国でレビュー済み
Amazonで購入
Michael Bay returns to the toy based franchise with this sequel, the novelty of the first has worn off but it still doesn't fail to entertain and thrill. Shia LaBeouf and Megan Fox are back, this time he is off to college and leaving the autobots behind, who have now become guardians and aid to the human race. But the evil Megatron is once again awakened and plans to destroy the sun, and use a shard of the All Spark cube to reawaken his master who will then come to earth and rule.
The special effects are perfect as usual and the plotline is entertaining and original, however what is wrong with this sequel is again teh strange choice of humour, the Mom who gets high on drugged brownies and ends up jumping every college student, the robots that try to have sex with Megan Fox's leg. Apart from this humour the film is very near perfect, though it just isn't as good as the first, the action sequences are thrilling and edge of seat and the cast is still good.
Overall it is perfect for fans of the first film, though for those who only mildly enjoyed the first it will not be entertaining.
続きを読む
違反を報告
レビュー を日本語に翻訳する